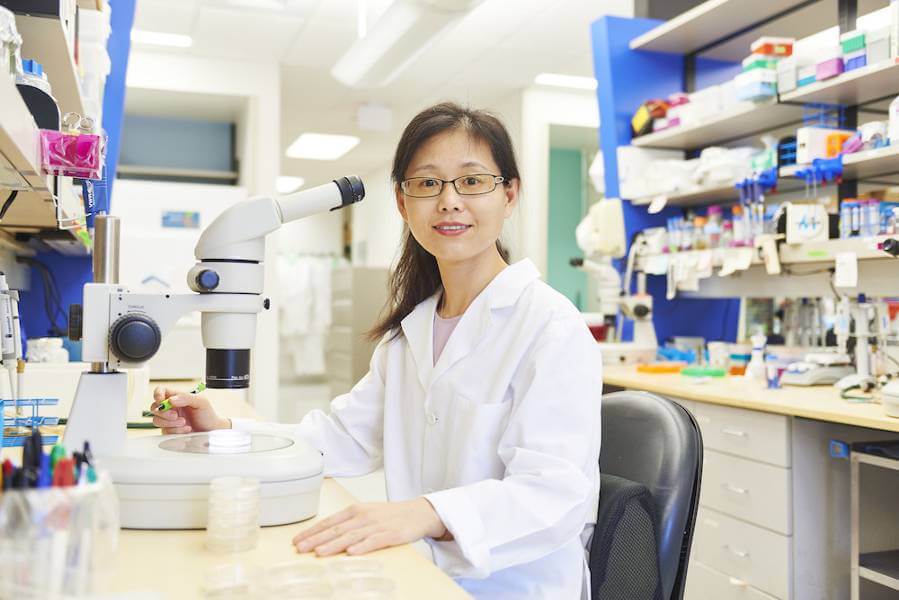 HHMI Investigator Meng Wang is studying the secrets to longevity. Her team has shown how the lysosome plays a role in aging. Credit: Anthony Rathbun/AP Images for HHMI

Scientists have discovered that lysosomes in roundworms produce molecules that allow cells to ‘talk’ to one another about aging, coordinating the process across the entire organism.

For decades, biology students have learned that lysosomes – tiny sacs found within nearly all cells – had a singular task: to gobble up bits of foreign material and worn-out cell parts. The aim? To break them down for recycling.

But that lesson might soon need revising. Now, scientists are learning that molecules produced during the recycling process can also serve as signals that talk to other parts of the body.

These signals seem to play a role in determining how and when organisms grow old. Cells in different organs and tissues around the body send signals to one another constantly, says Meng Wang, an HHMI Investigator at Baylor College of Medicine. “When we’re young, everything is connected and communicating. But as we age, some of these connections are lost and function declines.”

Wang has spent the past seven years exploring the link between longevity and the signals lysosomes produce. Her team previously discovered that such signaling occurs within cells. Now, they have found evidence that the anti-aging messages are transmitted between cells too, and among different tissues, Wang and her colleagues reported in a preprint on bioRxiv.org and later on June 9, 2022, in the journal Nature Cell Biology. The results suggest that lysosome signals help coordinate the body’s aging process – and prolong the lives of some organisms.

Longevity, it seems, runs deep in Wang’s blood – her paternal and maternal grandmothers lived until ages 100 and 95, respectively. Neither was ill, and why they died remains a mystery, she says. “It makes me feel like there’s some secret to longevity and if we can study this, maybe we can use the knowledge and apply it to everyone.”

By 2050, scientists expect the number of people aged 65 years and up worldwide to double to 1.5 billion, according to a 2019 report from the United Nations. And growing older, scientists know, comes with an increased likelihood of disease and other health problems. That explains why research on lysosomes and longevity has taken off in recent years, says Xiaochen Wang, a biophysicist at the Chinese Academy of Sciences (CAS) in Beijing who specializes in lysosomes. Scientists have known for more than 50 years that proteins, lipids, and other molecules tend to accumulate in cells that are old, but, she says, “only now are people starting to pay more attention to these pieces of data.”

Because lysosomes are the dumping site for cellular waste products, researchers have begun to study them in greater detail, suspecting a connection to aging. Within the past decade, scientists have shown that lysosomes serve as a platform the cell uses to send messages about its general state, such as its glucose and stress levels. In 2015, Meng Wang was one of the first to discover specific anti-aging signals produced by lysosomes in the roundworm C. elegans.The CAS’s Wang says the work stands out because it was conducted in a living organism, rather than in the cultured cells researchers typically use to study lysosomes. Additionally, those experiments showed how one particular molecule released from lysosomes traveled to the cell’s nucleus and acted as a signal that extended the worm’s lifespan. “It’s a very beautiful piece of work,” she says.

From one cell to another

The newly published study in Nature Cell Biology takes the research one step further. In work led by Wang’s PhD student Marzia Savini, the Baylor team discovered that when lysosomes produce a fatty acid called dihomo-gamma-linoleic acid, it triggers a chain reaction of cellular messages that ultimately extend the worms’ lives. When the researchers dialed up this fatty acid signaling, worms lived 20 to 25 days, an increase from the normal lifespan of 17 days. Crucially, the signal molecule was generated in fat tissues, yet detected by neurons elsewhere in the worms. That means lysosomes produce signals that cells use to coordinate longevity across different tissues.

“Our previous work showed that lysosomes send signals within the same cell, but this work shows that they can talk to other cells too,” explains Wang. “It really helps us understand how longevity is regulated at a whole organism level.”

Today, Wang and her team continue to hunt for other molecules lysosomes produce that may act as anti-aging signals. There’s still so much to uncover, she says, such as figuring out when the molecules begin acting as signals, how they regulate aging, and how that function withers with age. In August, Wang will move her lab to HHMI Janelia Research Campus in Ashburn, Virginia, where she will be a senior group leader.

The goal isn’t to have everyone live for centuries, says Wang, but rather for people to spend their last years healthy, active, and independent – just like her grandmothers. “I’m passionate to know how people and organisms sustain health with time.”