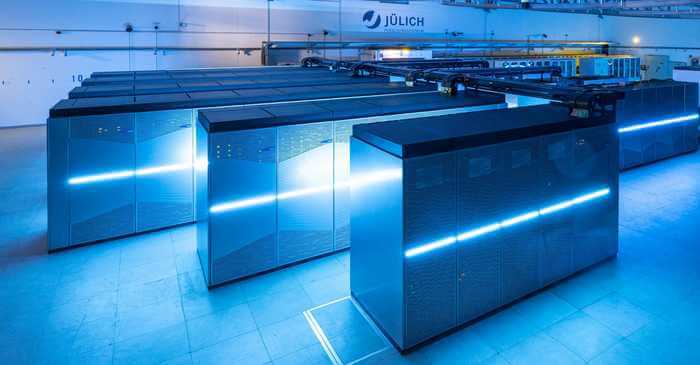 Germany's fastest supercomputer JUWELS at Forschungszentrum Jülich, which is funded in equal parts by the Federal Ministry of Education and Research (BMBF) and the Ministry of Culture and Science of the State of North Rhine-Westphalia (MKW NRW) via the Gauss Centre for Supercomputing (GCS).

The computer, which will bear the name JUPITER (short for “Joint Undertaking Pioneer for Innovative and Transformative Exascale Research”), will be installed as of 2023 in a specially designed building on the campus of Forschungszentrum Jülich. It is intended that the system will be operated by the Jülich Supercomputing Centre (JSC), whose supercomputers JUWELS and JURECA currently rank among the most powerful in the world. JSC had participated in the application procedure for a high-end supercomputer as a member of the Gauss Centre for Supercomputing (GCS), an association of the three national supercomputing centres JSC in Jülich, High-Performance Computing Center Stuttgart (HLRS), and Leibniz Computing Centre (LRZ) in Garching. The competition was organized by the European supercomputing initiative EuroHPC JU, which was formed by the European Union together with European countries and private companies.

JUPITER is now set to become the first European supercomputer to make the leap into the exascale class. In terms of computing power, it will be more powerful than 5 million modern laptops or PCs. Just like Jülich’s current supercomputer JUWELS, JUPITER will be based on a dynamic, modular supercomputing architecture, which Forschungszentrum Jülich developed together with European and international partners in the EU’s DEEP research projects.

In a modular supercomputer, various computing modules are coupled together. This enables program parts of complex simulations to be distributed over several modules, ensuring that the various hardware properties can be optimally utilized in each case. Its modular construction also means that the system is well prepared for integrating future technologies such as quantum computing or neuromorphic modules, which emulate the neural structure of a biological brain.

One major challenge is the energy that is required for such large computing power. The average power is anticipated to be up to 15 megawatts. JUPITER has been designed as a “green” supercomputer and will be powered by green electricity. The envisaged warm water cooling system should help to ensure that JUPITER achieves the highest efficiency values. At the same time, the cooling technology opens up the possibility of intelligently using the waste heat that is produced. For example, just like its predecessor system JUWELS, JUPITER is set to be connected to the new low-temperature network on the Forschungszentrum Jülich campus. Further potential applications for the waste heat from JUPITER are currently being investigated by Forschungszentrum Jülich.

Hendrik Wüst, Minister President of the State of North Rhine-Westphalia:
Forschungszentrum Jülich has once again won out with its outstanding modular supercomputing architecture: Europe’s first exascale supercomputer is coming to North Rhine-Westphalia. This is a mark of recognition for the scientific community and the overall excellence of our state. As a location, it offers comprehensive possibilities for a massive increase in system performance, right up to the integration of quantum modules in an exascale computer. The technologies that are currently being developed will shape future applications in all areas related to the simulation of highly complex systems and enable us to make even more reliable statements in crucially important fields such as climate and brain research, traffic management, and the development of evacuation scenarios for large events. This cutting-edge research in the field of supercomputing gives us every opportunity to solve the major challenges of our time. As the federal state government, we are happy to support this pioneering development.

Bettina Stark-Watzinger, Federal Minister of Education and Research:
I’m delighted that Europe’s first exascale supercomputer is coming to Germany. It will be operated in Jülich and its computing power will be equivalent to that of more than 5 million modern laptops. As the “ministry of opportunities”, we are providing 500 million euros in funding, together with the EU and the state of North Rhine-Westphalia, for this supercomputer. This is a massive investment in Germany’s research infrastructure, through which we are seeking to expand our technological sovereignty. The supercomputer will help to solve complex scientific questions and enable the analysis of huge data volumes. This helps us, for instance, with the issues of climate change, tackling the pandemic, and developing artificial intelligence. Over the next few years, we will also be launching two additional exascale supercomputers in Munich and Stuttgart in cooperation with the federal states of Bavaria and Baden-Württemberg.

Isabel Pfeiffer-Poensgen, Minister of Culture and Science of the German State of North Rhine-Westphalia:
The decision to build Europe’s first exascale computer in Jülich continues Forschungszentrum Jülich’s long-standing success in the field of supercomputing. With its supercomputers JUWELS and JURECA, Forschungszentrum Jülich today ranks among the most innovative supercomputing centres in the world. As the home of Europe’s first exascale computer, Jülich will continue to build on its leading international position. One thing is clear: modern science is now inconceivable without supercomputers. In both basic and application-oriented research, the importance of computational simulation techniques is set to further increase over the next few years. With the potential integration of quantum technologies, the exascale computer will also form a bridge to quantum computing – a major technology of the future. Forschungszentrum Jülich also plays a leading national and international role as a member of the “EIN Quantum NRW” network together with other strong partners from the university and research scene in the state of North Rhine-Westphalia (NRW).

Prof. Dr.-Ing. Wolfgang Marquardt, Chair of the Board of Directors of Forschungszentrum Jülich:
In taking the leap towards exascale computing, we are working with strong partners to retain our digital sovereignty in Germany and Europe, as well as doing our share to ensure that Germany remains a strong and progressive technological hub. JUPITER will take the scientific computing infrastructure in North Rhine-Westphalia, Germany and Europe to a new level. As part of the Helmholtz Association, Forschungszentrum Jülich will thus receive a new large-scale facility that will benefit a large user community and that was only made possible through a pan-European commitment as well as considerable support from the German Federal Government and the state of North Rhine-Westphalia for its procurement, operation, and scientific use.

Prof. Dr. Astrid Lambrecht, Member of the Board of Directors of Forschungszentrum Jülich:
Achieving the level of exascale is the next big step in the field of high-performance computing. The decision to make Jülich the home of Europe’s exascale supercomputer will help Forschungszentrum Jülich to build on its reputation as an outstanding location for supercomputing and an internationally recognized centre of development for pioneering technologies. Our aim is to offer the most powerful infrastructure in Europe that combines neuromorphic computing, supercomputing, and quantum computing, ensuring that various user groups from science and industry can learn and grow together while also benefiting from each other.

Prof. Dr. Dr. Thomas Lippert, Head of the Jülich Supercomputing Centre at Forschungszentrum Jülich:
The EuroHPC decision enables us to take this significant step towards exascale in cooperation with research and industry, scientific users and funding agencies. Immense challenges exist at various levels – both technical and financial. However, it is important to realise that we are talking about a machine from which the whole of society will benefit. From traffic optimization, autonomous driving, and environmental monitoring right up to digital twins: all these challenges are extremely calculation-intensive and are reliant on new technologies, many of which we can tap into with the modular exascale system.