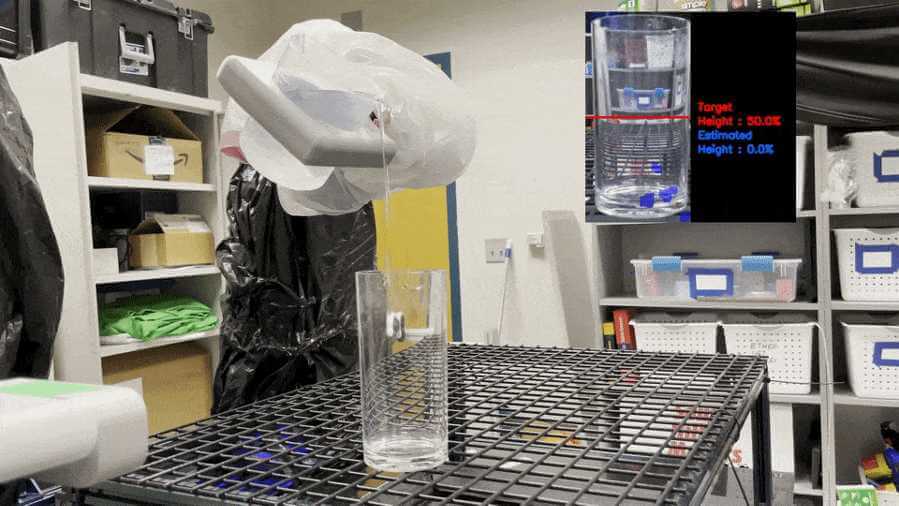 A horse, a zebra and artificial intelligence helped a team of Carnegie Mellon University researchers teach a robot to recognize water and pour it into a glass.

Water presents a tricky challenge for robots because it is clear. Robots have learned how to pour water before, but previous techniques like heating the water and using a thermal camera or placing the glass in front of a checkerboard background don’t transition well to everyday life. An easier solution could enable robot servers to refill water glasses, robot pharmacists to measure and mix medicines, or robot gardeners to water plants.

Gautham Narasimhan, who earned his master’s degree in the Robotics Institute in 2020, worked with a team in the institute’s Robots Perceiving and Doing Lab to use AI and image translation to solve the problem.

Image translation algorithms use collections of images to train artificial intelligence to convert images from one style to another, such as transforming a photo into a Monet-style painting or making an image of a horse look like a zebra. For this research, the team used a method called contrastive learning for unpaired image-to-image translation, or CUT, for short.

“You need some way of telling the algorithm what the right and wrong answers are during the training phase of learning,” said David Held, an assistant professor in the Robotics Institute who advised Narasimhan. “However, labeling data can be a time-consuming process, especially for teaching a robot to pour water, for which the human might need to label individual water droplets in an image.”

Enter the horse and zebra.

A transparent liquid like water is hard for a robot to see because the way it reflects, refracts and absorbs light varies depending on the background. To teach the computer how to see different backgrounds through a glass of water, the team played YouTube videos behind a transparent glass full of water. Training the system this way will allow the robot to pour water against varied backgrounds in the real world, regardless of where the robot is located.

“Even for humans, sometimes it’s hard to precisely identify the boundary between water and air,” Narasimhan said.

Using their method, the robot was able to pour the water until it reached a certain height in a glass. The experiment was then repeated with glasses of different shapes and sizes.

Narasimhan said there’s room for future research to expand upon this method — adding different lighting conditions, challenging the robot to pour water from one container to another, or estimating not only the height of the water, but also the volume.

The research, funded by LG Electronics and a National Science Foundation grant, was presented at the IEEE International Conference on Robotics and Automation last month in Philadelphia. Reaction to the work has been positive, Narasimhan said.

“People in robotics really appreciate it when research works in the real world and not just in simulation,” said Narasimhan, who now works as a computer vision engineer with Path Robotics in Columbus, Ohio. “We wanted to do something that’s quite simple yet effective.”