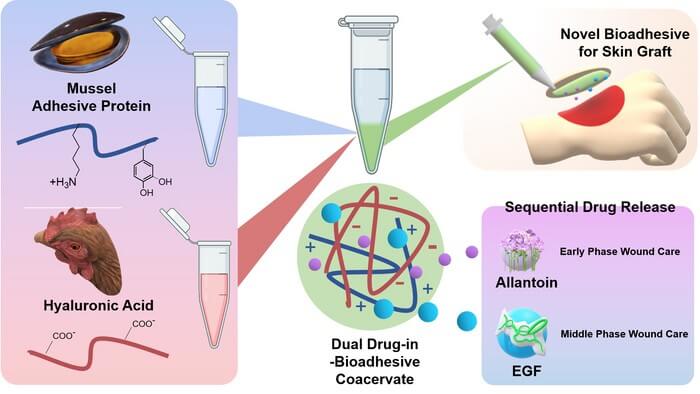 Schematic diagram of the sutureless skin graft medical adhesive based on the mussel adhesive protein that can load and release two wound healing drugs (allantoin and epidermal growth factor).

The biggest concern for patients undergoing skin grafting are scarring post-surgery and the regeneration of transplanted skin.

The depth of scarring after suturing varies depending on the skill of the medical personnel performing the skin grafting, and wound healing at the suture site requires over a month. Recently, a Korean research team has drawn attention for developing a bioadhesive based on the mussel adhesive protein (MAP) that enables quick healing of wounds with minimum scarring. Skin transplantation using this adhesive can effectively revive skin without using sutures.

A research team led by Professor Hyung Joon Cha, Woo Hyung Park and Ph.D. candidate Jae Yun Lee from the Department of Chemical Engineering at POSTECH has developed a bioadhesive for skin grafting containing two types of drugs in collaboration with Dr. Hyo Jeong Kim of the Korea Research Institute of Chemical Technology.

These research findings, proposing a new system for scarless skin grafting, were recently published in the Chemical Engineering Journal, the most prestigious international journal in the field of chemical engineering.

The research team developed the bioadhesive by introducing allantoin and epidermal growth factor in a mussel adhesive protein coacervate. Upon application of this bioadhesive, the two drugs are successively released, according to the stage of the wound healing process, and regenerate the skin.

Results of the study indicate that the wound area recovered more efficiently than when treated with sutures used in current skin grafting. In particular, loss of hair follicles in the transplanted area was minimal, while collagen and major skin factor levels were effectively revived.

A characteristic of this bioadhesive is that unlike sutures, it leaves minimal scarring on the wound area and is harmless to the human body because it utilizes mussel adhesive protein, a biomaterial.

Professor Hyung Joon Cha explained, “We used the mussel adhesive protein – a biomaterial that originated in Korea – in the newly developed bioadhesive for skin grafting that resulted in minimal scarring and promoted skin regeneration.” He added, “This new system will be effectively applicable in the transplantation of various affected areas requiring tissue regeneration.”

This study was supported by the Health Technology Research and Development Project of the Ministry of Health and Welfare of Korea. The technology of the mussel adhesive protein (MAP) has undergone a technology transfer to Nature Gluetech Co. Ltd, and among these, ”FIxLight”, a medical adhesive for extra-epidermal soft tissue, is undergoing human clinical trials. The commercialization and development of the medical adhesive coacervate is in progress.