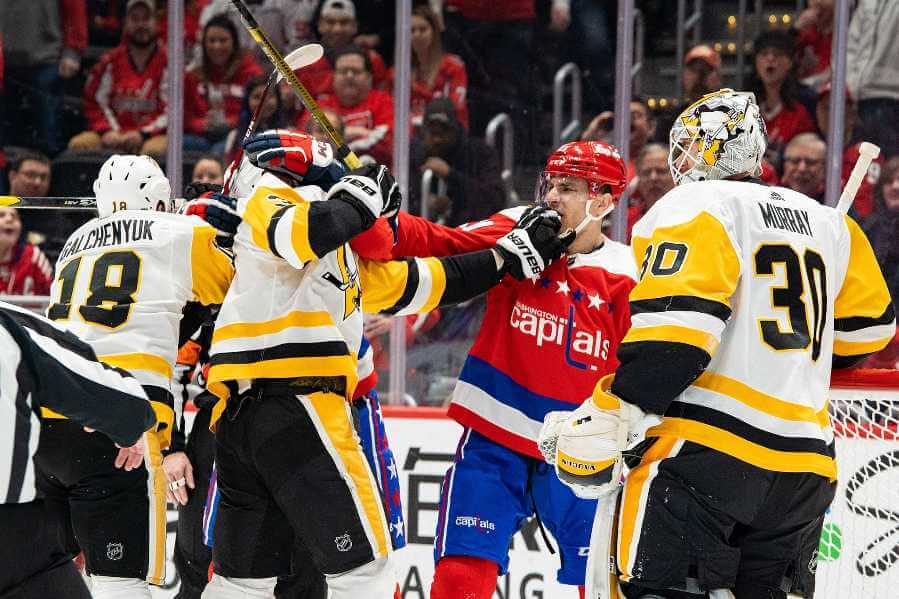 A fight between the Washington Capitals and Pittsburgh Penguins on Feb. 2, 2020.

Allowing fights among players in the National Hockey Leagues does not deter greater violence in the modern game, according to a new study.

In fact, teams and players that fight more often are also responsible for a disproportionate number of violent penalties across the league.

The results refute the arguments by league officials for keeping fighting in the game, said Michael Betz, author of the study and associate professor of human sciences at The Ohio State University.

“The issue of fighting is polarizing within the hockey community and for casual fans. As a former hockey player and a researcher, I wanted to see if the arguments in support of fighting held up,” said Betz, who played goalie as a collegian at Ohio State and briefly as a professional in the ECHL (East Coast Hockey League).

“What I found was that not a single approach I tried yielded any evidence that fighting or even the threat of fighting deters more violent play in the NHL.”

The issue is especially important now with the increased understanding of the consequences of traumatic brain injuries, Betz said.

“Fighting increases the risk of TBIs but isn’t essential to hockey and removing it wouldn’t fundamentally alter the sport,” he said.

For the study, Betz examined data on all regular season penalties from 2010 to 2019. He separated penalties into those that are tactical – meant to give a player a strategic advantage – and those that are violent, which are aimed at intimidating or injuring an opponent.

Violent penalties included boarding, charging, elbowing, roughing and major interference penalties.  If fighting did act as a deterrent, it should lower the number of these violent penalties that could injure a player, Betz said.

Overall, fighting in the NHL declined dramatically during the time of the study – the 2018-19 season had 65% fewer fights per game than the 2010-11 season. Much of that decline has been attributed to the league having access to more fast, skilled players and not needing as many players who rely on intimidation.

But if fighting is necessary as a deterrent, there should have been an increase in violent penalties as the number of fights decreased.  But just the opposite happened.  While all types of penalties declined during the period of the study, violent penalties have fallen more than twice as fast as tactical penalties (25% versus 12%), the study found.

Another analysis at the team level also showed that fighting didn’t protect a team’s players from more violent play: In fact, each additional fight a team was engaged in was associated with more violent penalties taken against them.

“If anything, fighting seemed to encourage more violence against teams that were involved in brawls,” Betz said.

Even within games, results showed similar patterns. Betz found that the number of violent penalties increased in a game after a fight as opposed to decreasing.

The study also found that a fight between two teams early in a season did not significantly reduce the number of violent penalties in a second game between the teams later that same season.

One possible explanation is that having a top fighter on your team who could take on any opposing player in a fight is what reduced violence against the fighting player’s team.  Betz examined that by looking at the three players who were tied for the most fights (6) in the 2018-19 season and a player who had one fewer (5) fights that year.

Whether these top fighters were in the lineup or not did not have any statistically significant effect on the number of violent penalties that their opponents had called against their teams, results showed.

If fighting ever did deter more egregious violence against players, this study shows it no longer does in the modern NHL, Betz said.

“The league may have other reasons why they want to keep fighting in the game – there is some evidence that more fights increase fan attendance at games,” he said.

“But they should just come out and say that and not hide behind the deterrent effect, because there is no evidence for it.”

Betz said he is especially concerned for junior hockey leagues in the United States and Canada, which serve as the main training ground for players aged 16 to 19 who aspire to play in college and the professional ranks. These junior leagues follow the lead of the NHL and, unlike colleges, allow fighting.

“These younger players aren’t getting paid, and their developing brains are more vulnerable to traumatic brain injuries. The evidence shows fights are not protecting them from other violence, so there is a real ethical issue here in allowing fighting to continue,” he said.