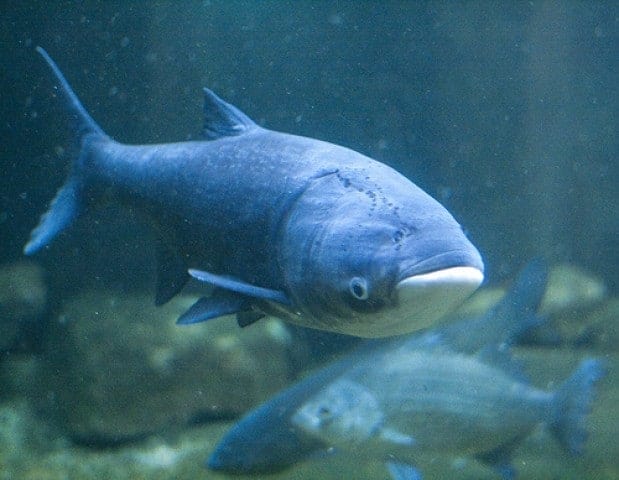 Illinois officials this month announced that Asian carp would now be called “copi” in an attempt to make the fish more desirable for eating. Joseph Parkos, the director of the Illinois Natural History Survey’s Kaskaskia, Ridge Lake and Sam Parr biological stations in Illinois, spoke with News Bureau life sciences editor Diana Yates about scientific initiatives to study and control carp/copi fish populations and the potential for rebranding to aid those efforts.

What are Asian carp/copi and where in Illinois are their populations a problem?

“Asian carp” is a catchall term that has been previously used to refer to several nonnative carp species that have established populations in North America: bighead carp, black carp, grass carp and silver carp. Scientists who study and manage these species have moved away from calling them Asian carp, in part because of the imprecise nature of this term. Each species has its own unique biology, status and impacts on native ecosystems. In general, invasive carp are ongoing problems where their populations have become very large, such as in the Lower Illinois River. They pose great risks for habitats and ecosystems connected to waterways wherever they are found. For example, the expansion of silver carp and bighead carp populations into Lake Michigan is of great concern.

How do you go about studying them?

What trends are you seeing in the data?

From our work on invasive carp reproduction in the Illinois River, we have found that reproductive activity by invasive carp varies a lot from year to year. Some of this is the result of changing seasonal temperatures and flow conditions in the river. We are paying particular attention now to how climate-related changes in rainfall and river hydrology in the Midwest will affect reproduction by invasive carp. We also have found that removing sufficient numbers of adult carp can also diminish the number of offspring produced by the remaining population. Reducing reproductive output and constraining subsequent recruitment by invasive carp will be crucial for limiting the growth and expansion of their populations.

Overall, silver carp continue to produce more offspring than the other carp species. We have not yet found evidence of black carp reproduction in the Illinois River. However, the capture of juvenile black carp in this waterway and the increasing size of their population suggests that it may be only a matter of time until this species is found to be spawning in the river.

What are public perceptions of the fish?

My impression is that most folks are aware that silver carp and bighead carp are nuisance species, especially if they have experienced the hazards posed by jumping silver carp. The perception of grass carp may be a bit more mixed, as people with the proper permits continue to use these fish to control aquatic vegetation in their ponds. Black carp is probably not on most folks’ radar at present, but this species poses a great risk for our native snails and mussels. There probably are a lot of people who have not given serious thought to eating any of these carp species, perhaps because they associate them with another invasive carp, the common carp.

How will changing their name make them more palatable as potential food items?

I am not an expert on branding or consumer behavior, but I suspect that the name change alone will not be enough and that it will take an associated marketing campaign to change consumers’ attitudes.

Some people are skeptical of the resources that are going into this rebranding effort. They say that the money can be better spent on other control or conservation initiatives. What do you think?

I get that some folks would like to see the money used to address other very important environmental issues. Dealing with biological invasions takes a multipronged approach, and given that contracted commercial fishermen have been the most effective at removing large numbers of invasive carp, this method of control is one of the important tools in our management toolbox. Ideally, the rebranding would facilitate the fishery becoming self-sufficient, ultimately freeing up funding for other critical environmental needs.