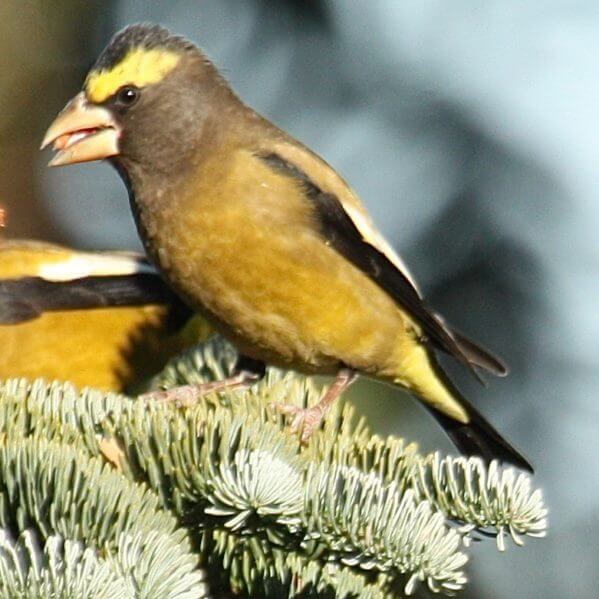 The evening grosbeak, a noisy and charismatic songbird, once arrived at Oregon State University in springtime flocks so vast an OSU statistics professor estimated there were up to a quarter million of the birds on campus daily.

Gone is the era, however, when the birds were so numerous that students, staff and faculty felt the need to take cover from grosbeak droppings.

An Oregon State study published in the journal Diversity shows the number of evening grosbeaks using the campus as a migration stop-over site has gone down an average of 2.6% per year over the last four decades. The bird has been experiencing decades of decline throughout its range, which includes most of the United States, said Douglas Robinson of the OSU College of Agricultural Sciences.

It’s not yet known, Robinson said, why there are fewer evening grosbeaks than there used to be. It could be related to disease, climate change or shifts in land use, or some combination of those, or a different factor that scientists have yet to uncover.

“Planned surveys designed to take advantage of opportunities presented by spring stop-over sites will improve our understanding of population fluctuations over time,” Robinson said. “Our observations suggest that further attention should be directed toward risk analyses and hypothesized explanations for the decline of this charismatic bird species.”

Research led by Robinson produced a single-day high count of 1,442 birds during 117 surveys that took place on the Oregon State campus from 2013 to 2015. In total, the researchers counted 8,407 grosbeaks.

“The numbers that used to appear here each spring were in the hundreds of thousands,” said Robinson, who was the Mace Watchable Wildlife Endowed Chair at OSU during the study. “Now we are down to a few thousand at most, sometimes just a few hundred. We went from newspaper reports of students during the 1970s carrying umbrellas on sunny days to keep the bird droppings off their heads to people scarcely noticing that the birds are around.”

The evening grosbeak, a black, white and bright yellow member of the finch family, is an irruptive species – if food is scarce in winter, it moves south. But it also migrates on predictable schedules, especially during springtime, enabling populations to be monitored at stop-over locations like OSU’s Corvallis campus.

“They eat elm seeds here before moving off to their forest breeding grounds in June,” Robinson said. “They’re usually here for a few weeks in April and May.”

Impressed by their huge numbers, Fred Ramsey, an OSU statistics professor from 1966 to 2003, used a randomized sampling strategy to count birds in selected elm trees. Ramsey, who over the course of his career made major contributions in the field of wildlife population estimation, calculated that on one spring day in the mid-1970s there were 150,000 to 250,000 birds foraging on campus.

Ramsey produced multiple papers on estimating wildlife abundance and participated in surveys of bird populations on numerous Pacific Islands, though his evening grosbeak estimate was not part of a scientific article.

“But Ramsey was a professional statistician, and even in the unlikely event he was off by an order of magnitude, it seems safe to conclude that evening grosbeak numbers are substantially lower than they were 45 years ago at our study site,” Robinson said. “When we compare the lower value from Ramsey’s estimate – 150,000 – with our maximum daily count of 1,442, that’s an average annual decline of 2.6%. Meanwhile, declines across the entire range of evening grosbeaks as quantified by North American Breeding Bird Survey data show a decline of 2.5%.”

The number of elm trees on campus has also gone down since Ramsey’s day, though the tree decline’s connection to the grosbeak population is uncertain.

Elms were planted across campus beginning with 35 in 1913 and eventually were the dominant canopy tree on campus, numbering more than 330 mature trees, Robinson said.

“In 1978, Dutch elm disease was spreading across North America, and there were concerns that arrival of the disease would cause widespread death of the elms, leaving the campus without shade trees,” he said. “That led to the removal of elms to ensure that root connections between infected trees would not allow the disease to spread too quickly.”

Over 10 years, all of the at-risk elms were cut down and replaced with disease-resistant elm varieties or other tree species; today the campus features 143 mature elms. Robinson doesn’t know of any evidence that disease‐resistant elms produce food that is less plentiful or desirable to grosbeaks but notes that could be a possibility.

It’s unlikely, however, that grosbeaks have simply shifted their foraging sites to other parts of Corvallis or the Willamette Valley, he said. Data from eBird from 2004 to 2021 showed a few higher counts from around Corvallis than what was observed on campus, but the highest single‐day count was fewer than 2,000 birds, he said.

Most high counts were between 90 and 500 birds, with similarly small tallies reported across the whole Willamette Valley.

About the OSU College of Agricultural Sciences: Through its world-class research on agriculture and food systems, natural resource management, rural economic development and human health, the College provides solutions to Oregon’s most pressing challenges and contributes to a sustainable environment and a prosperous future for Oregonians.