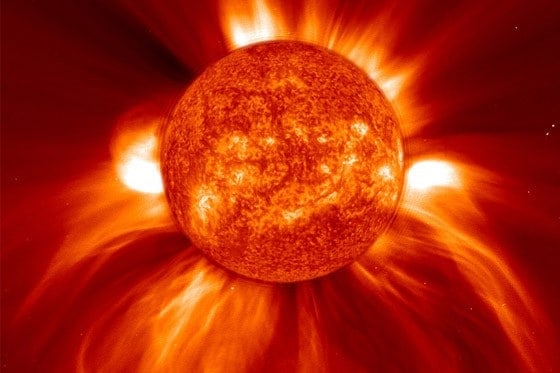 One day in the fall of 2011, Neil Sheeley, a solar scientist at the Naval Research Laboratory in Washington, D.C., did what he always does – look through the daily images of the sun from NASA’s Solar Dynamics Observatory (SDO).

But on this day he saw something he’d never noticed before: a pattern of cells with bright centers and dark boundaries occurring in the sun’s atmosphere, the corona. These cells looked somewhat like a cell pattern that occurs on the sun’s surface — similar to the bubbles that rise to the top of boiling water — but it was a surprise to find this pattern higher up in the corona, which is normally dominated by bright loops and dark coronal holes.

Sheeley discussed the images with his Naval Research Laboratory colleague Harry Warren, and together they set out to learn more about the cells. Their search included observations from a fleet of NASA spacecraft called the Heliophysics System Observatory that provided separate viewpoints from different places around the sun. They describe the properties of these previously unreported solar features, dubbed “coronal cells,” in a paper published online in The Astrophysical Journal on March 20, 2012 that will appear in print on April 10.

The coronal cells occur in areas between coronal holes – colder and less dense areas of the corona seen as dark regions in images — and “filament channels” which mark the boundaries between sections of upward-pointing magnetic fields and downward-pointing ones. Understanding how these cells evolve can provide clues as to the changing magnetic fields at the boundaries of coronal holes and how they affect the steady emission of solar material known as the solar wind streaming from these holes.

When the cells were discovered in the fall of 2011, the SDO and the two STEREO (short for Solar Terrestrial Relations Observatory) spacecraft each had widely different views of the sun. Thus, as the 27-day solar rotation carried the coronal cells across the face of the sun, they appeared first in STEREO-B data, then in SDO, and finally in STEREO-A, before starting over again in STEREO-B. In addition, when one observatory looked down directly on the cells, another observatory could see them from the side.

The researchers used time-lapse sequences obtained from the three satellites to track these cells around the sun. When an observatory looked down on one of these areas, it showed the cell pattern that Sheeley first noticed. But when the same region was viewed obliquely, it showed plumes leaning off to one side. Taken together, these two-dimensional images reveal the three-dimensional nature of the cells as columns of solar material extending upward through the sun’s atmosphere, like giant pillars of gas.

To round out the picture even further, the team turned to other instruments and spacecraft. The original SDO images were from its Atmospheric Imaging Assembly, which takes conventional images of the sun. Another instrument on SDO, the Helioseismic and Magnetic Imager (HMI), provides magnetic maps of the sun. The scientists superimposed conventional images of the cells with HMI magnetic field images to determine the placement of the coronal cells relative to the complex magnetic fields of the sun’s surface.

Second, the scientists learned more about how the coronal cells were related to other structures on the sun, in their location between a coronal hole and a nearby filament channel. The cells consistently occurred in areas dominated by magnetic fields that point in a single direction, either up or down. In addition, the fields of the nearby coronal hole are what’s known as “open,” extending far into space without returning to the sun. On the other hand, the field lines in the cells were “closed,” looping up over the filament channel and connecting back down to the sun.

The side-by-side nature of these open and closed magnetic fields – open in the coronal holes, and closed in the coronal cells – led to another scientific insight. In some of the movies, a large loop of solar material called a “filament” erupted from the adjacent filament channel. The coronal cells, with their closed field lines, disappeared and were replaced with a dark coronal hole and its associated open field lines.

“Sometimes the cells were gone forever, and sometimes they would reappear exactly as they were,” says Sheeley. “So this means we need to figure out what’s blowing out the candles on the birthday cake and re-lighting them. It’s possible that this coronal cell structure is the same structure that exists inside the coronal holes – but they’re visible to us when the magnetic fields are closed, and not visible when the magnetic fields are open.”

It has long been known that isolated plumes occur intermittently inside coronal holes when very small active regions erupt there. Presumably, these eruptions are providing glimpses of discrete coronal structures similar to the more permanently visible candles adjacent to the holes. When a portion of a hole closes, the candle-like structure is suddenly lit up by the appearance of cells.

In addition to SDO and STEREO, the team went back to historical data on ESA’s and NASA’s Solar and Heliospheric Observatory (SOHO), which has provided observations since the previous sunspot minimum in 1996. They did not find coronal cells in 1996 or in the years around the recent sunspot minimum in 2008-2009, but they did find numerous examples of cells in the years around the intervening sunspot maximum in 2000. The recent increase in sunspot activity together with the improved observations from STEREO and SDO may explain why the cells were discovered in 2011.

The team also constructed Doppler images – images that show how quickly and where solar material in the sun’s atmosphere moves toward the viewer – of the coronal cells using the Extreme-Ultraviolet Imaging Spectrometer (EIS) on the Japanese Hinode spacecraft. These images show that the centers of the cells move upward faster than their boundaries, further rounding out the physical image of these giant candles with a section rising from the middle.

“One of the wonderful things about SDO is the way the observations can be combined with other instruments,” says Dean Pesnell, SDO project scientist at NASA’s Goddard Space Flight Center in Greenbelt, Md. ” Combining data from SDO, STEREO, SOHO, and Hinode lets us paint a picture of the whole sun in ways that one instrument can’t.”