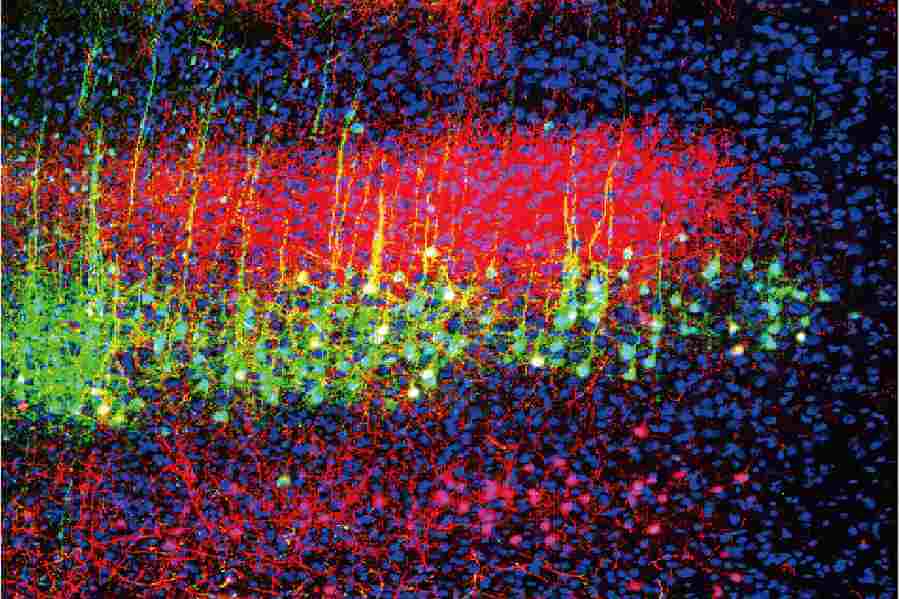 Sound reduces pain in mice by lowering the activity of neurons in the brain’s auditory cortex (green and magenta) that project to the thalamus. Wenjie Zhou

An international team of scientists has identified the neural mechanisms through which sound blunts pain in mice.

The findings, which could inform development of safer methods to treat pain, were published in Science. The study was led by researchers at the National Institute of Dental and Craniofacial Research (NIDCR); the University of Science and Technology of China, Hefei; and Anhui Medical University, Hefei, China. NIDCR is part of the National Institutes of Health.

“We need more effective methods of managing acute and chronic pain, and that starts with gaining a better understanding of the basic neural processes that regulate pain,” said NIDCR Director Rena D’Souza, D.D.S., Ph.D. “By uncovering the circuitry that mediates the pain-reducing effects of sound in mice, this study adds critical knowledge that could ultimately inform new approaches for pain therapy.”

Dating back to 1960, studies in humans have shown that music and other kinds of sound can help alleviate acute and chronic pain, including pain from dental and medical surgery, labor and delivery, and cancer. However, how the brain produces this pain reduction, or analgesia, was less clear.

“Human brain imaging studies have implicated certain areas of the brain in music-induced analgesia, but these are only associations,” said co-senior author Yuanyuan (Kevin) Liu, Ph.D., a Stadtman tenure-track investigator at NIDCR. “In animals, we can more fully explore and manipulate the circuitry to identify the neural substrates involved.”

The researchers first exposed mice with inflamed paws to three types of sound: a pleasant piece of classical music, an unpleasant rearrangement of the same piece, and white noise. Surprisingly, all three types of sound, when played at a low intensity relative to background noise (about the level of a whisper) reduced pain sensitivity in the mice. Higher intensities of the same sounds had no effect on animals’ pain responses.

“We were really surprised that the intensity of sound, and not the category or perceived pleasantness of sound would matter,” Liu said.

To explore the brain circuitry underlying this effect, the researchers used non-infectious viruses coupled with fluorescent proteins to trace connections between brain regions. They identified a route from the auditory cortex, which receives and processes information about sound, to the thalamus, which acts as a relay station for sensory signals, including pain, from the body. In freely moving mice, low-intensity white noise reduced the activity of neurons at the receiving end of the pathway in the thalamus.

In the absence of sound, suppressing the pathway with light- and small molecule-based techniques mimicked the pain-blunting effects of low-intensity noise, while turning on the pathway restored animals’ sensitivity to pain.

Liu said it is unclear if similar brain processes are involved in humans, or whether other aspects of sound, such as its perceived harmony or pleasantness, are important for human pain relief.

“We don’t know if human music means anything to rodents, but it has many different meanings to humans—you have a lot of emotional components,” he said.

The results could give scientists a starting point for studies to determine whether the animal findings apply to humans, and ultimately could inform development of safer alternatives to opioids for treating pain.

This press release describes a basic research finding. Basic research increases our understanding of human behavior and biology, which is foundational to advancing new and better ways to prevent, diagnose, and treat disease. Science is an unpredictable and incremental process— each research advance builds on past discoveries, often in unexpected ways. Most clinical advances would not be possible without the knowledge of fundamental basic research. To learn more about basic research, visit https://www.nih.gov/news-events/basic-research-digital-media-kit.