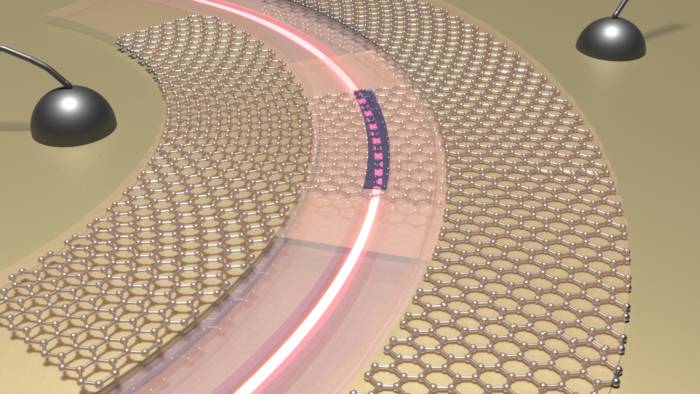 Data centers — dedicated spaces for storing, processing and disseminating data — enable everything from cloud computing to video streaming. In the process, they consume a large amount of energy transferring data back and forth inside the center. With demand for data growing exponentially, there is increasing pressure for data centers to become more energy efficient.

Data centers house servers, high-powered computers that talk to each other through interconnects, which are physical connections that allow for the exchange of data. One way to reduce energy consumption in data centers is to use light to communicate information with electrically controlled optical switches controlling the flow of light, and therefore information, between servers. These optical switches need to be multi-functional and energy-efficient to support the continued expansion of data centers.

In a paper published online July 4 in Nature Nanotechnology, a team led by University of Washington scientists reported the design of an energy-efficient, silicon-based non-volatile switch that manipulates light through the use of a phase-change material and graphene heater.

“This platform really pushes the limits of energy efficiency,” said co-corresponding author Arka Majumdar, a UW associate professor of physics and of electrical and computer engineering, as well as a faculty member at the UW Institute for Nano-Engineered Systems and the Institute for Molecular & Engineering Sciences. “Compared with what is currently being used in data centers to control photonic circuits, this technology would greatly reduce the energy needs of data centers, making them more sustainable and environmentally friendly.”

Silicon photonic switches are widely used in part because they can be made using well-established semiconductor fabrication techniques. Traditionally, these switches have been tuned through thermal effect, a process where heat is applied — often by passing a current through a metal or semiconductor — to change the optical properties of a material in the switch and thus changing the path of the light. However, not only is this process not energy-efficient, but the changes it induces are not permanent. As soon as the current is removed, the material reverts to its previous state and the connection — and flow of information — is broken.

To address this, the team, which includes researchers from Stanford University, the Charles Stark Draper Laboratory, the University of Maryland and the Massachusetts Institute of Technology, created a “set and forget” switch capable of maintaining the connection without any additional energy. They used a phase-change material that is non-volatile, meaning the material is transformed by briefly heating it, and it remains in that state until it receives another heat pulse, at which point it reverts back to its original state. This eliminates the need to constantly input energy to maintain the desired state.

“We realized we had to figure out how to reduce the volume that needed to be heated in order to boost the efficiency of the switches,” said lead and co-corresponding author Zhuoran (Roger) Fang, a UW doctoral student in electrical and computer engineering.

One approach would be to make a thinner silicon film, but silicon doesn’t propagate light well if it is thinner than 200 nm. So instead, they used an un-doped 220 nm silicon layer to propagate light and introduced a layer of graphene between the silicon and phase-change material to conduct electricity. Like metal, graphene is an excellent conductor of electricity, but unlike metal, it is atomically thin — it consists of just a single layer of carbon atoms arranged in a two-dimensional honeycomb lattice. This design eliminates wasted energy by directing all heat generated by the graphene to go towards changing the phase-change material. In fact, the switching energy density of this setup, which is calculated by taking the switching energy divided by the volume of the material being switched, is only 8.7 attojoules (aJ)/nm3, a 70-fold reduction compared to the widely used doped silicon heaters, the current state-of-the-art. This is also within one order of magnitude of the fundamental limit of switching energy density (1.2 aJ/nm3).

Even though using graphene to conduct electricity induces some optical losses, meaning some light is absorbed, graphene is so thin that not only are the losses minimal, but the phase-change material can still interact with the light propagating in the silicon layer. The team established that a graphene-based heater can reliably switch the state of the phase-change material more than 1,000 cycles. This is a notable improvement over the doped silicon heaters, which have only been shown to have an endurance of around 500 cycles.

“Even 1,000 is not enough,” said Majumdar. “Practically speaking, we need about a billion cycles endurance, which we are currently working on.”

Now that they have demonstrated that light can be controlled using a phase-change material and graphene heater, the team plans to show that these switches can be used for optical routing of information through a network of devices, a key step towards establishing their use in data centers. They are also interested in applying this technology to silicon nitride for routing single photons for quantum computing.

“The ability to be able to tune the optical properties of a material with just an atomically thin heater is a game-changer,” said Majumdar. “The exceptional performance of our system in terms of energy efficiency and reliability is really unheard of and could help advance both information technology and quantum computing.”