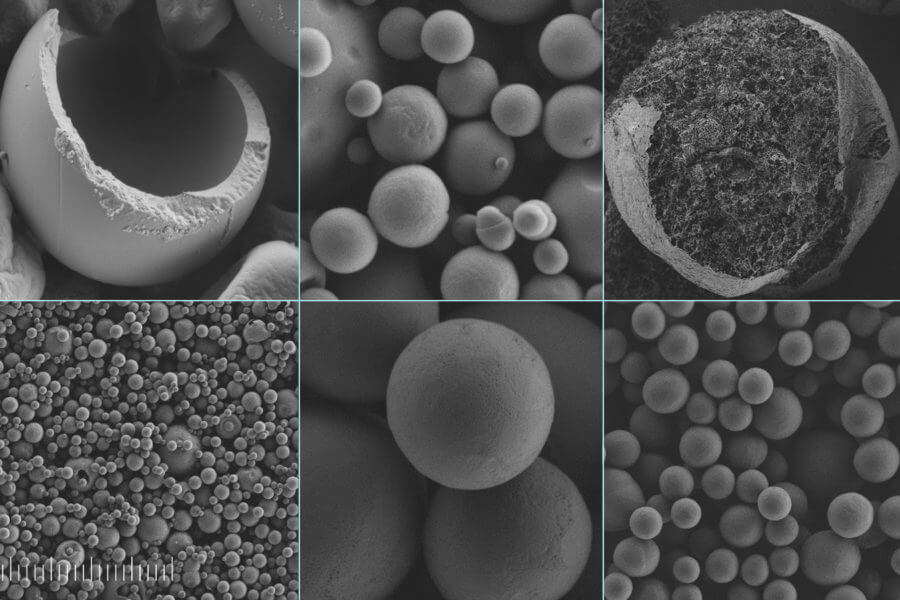 Microplastics, tiny particles of plastic that are now found worldwide in the air, water, and soil, are increasingly recognized as a serious pollution threat, and have been found in the bloodstream of animals and people around the world.

Some of these microplastics are intentionally added to a variety of products, including agricultural chemicals, paints, cosmetics, and detergents — amounting to an estimated 50,000 tons a year in the European Union alone, according to the European Chemicals Agency. The EU has already declared that these added, nonbiodegradable microplastics must be eliminated by 2025, so the search is on for suitable replacements, which do not currently exist.

Now, a team of scientists at MIT and elsewhere has developed a system based on silk that could provide an inexpensive and easily manufactured substitute. The new process is described in a paper in the journal Small, written by MIT postdoc Muchun Liu, MIT professor of civil and environmental engineering Benedetto Marelli, and five others at the chemical company BASF in Germany and the U.S.

The microplastics widely used in industrial products generally protect some specific active ingredient (or ingredients) from being degraded by exposure to air or moisture, until the time they are needed. They provide a slow release of the active ingredient for a targeted period of time and minimize adverse effects to its surroundings. For example, vitamins are often delivered in the form of microcapsules packed into a pill or capsule, and pesticides and herbicides are similarly enveloped. But the materials used today for such microencapsulation are plastics that persist in the environment for a long time. Until now, there has been no practical, economical substitute available that would biodegrade naturally.

Much of the burden of environmental microplastics comes from other sources, such as the degradation over time of larger plastic objects such as bottles and packaging, and from the wear of car tires. Each of these sources may require its own kind of solutions for reducing its spread, Marelli says. The European Chemical Agency has estimated that the intentionally added microplastics represent approximately 10-15 percent of the total amount in the environment, but this source may be relatively easy to address using this nature-based biodegradable replacement, he says.

“We cannot solve the whole microplastics problem with one solution that fits them all,” he says. “Ten percent of a big number is still a big number. … We’ll solve climate change and pollution of the world one percent at a time.”

Unlike the high-quality silk threads used for fine fabrics, the silk protein used in the new alternative material is widely available and less expensive, Liu says. While silkworm cocoons must be painstakingly unwound to produce the fine threads needed for fabric, for this use, non-textile-quality cocoons can be used, and the silk fibers can simply be dissolved using a scalable water-based process. The processing is so simple and tunable that the resulting material can be adapted to work on existing manufacturing equipment, potentially providing a simple “drop in” solution using existing factories.

Silk is recognized as safe for food or medical use, as it is nontoxic and degrades naturally in the body. In lab tests, the researchers demonstrated that the silk-based coating material could be used in existing, standard spray-based manufacturing equipment to make a standard water-soluble microencapsulated herbicide product, which was then tested in a greenhouse on a corn crop. The test showed it worked even better than an existing commercial product, inflicting less damage to the plants, Liu says.

While other groups have proposed degradable encapsulation materials that may work at a small laboratory scale, Marelli says, “there is a strong need to achieve encapsulation of high-content actives to open the door to commercial use. The only way to have an impact is where we can not only replace a synthetic polymer with a biodegradable counterpart, but also achieve performance that is the same, if not better.”

The secret to making the material compatible with existing equipment, Liu explains, is in the tunability of the silk material. By precisely adjusting the polymer chain arrangements of silk materials and addition of a surfactant, it is possible to fine-tune the properties of the resulting coatings once they dry out and harden. The material can be hydrophobic (water-repelling) even though it is made and processed in a water solution, or it can be hydrophilic (water-attracting), or anywhere in between, and for a given application it can be made to match the characteristics of the material it is being used to replace.

In order to arrive at a practical solution, Liu had to develop a way of freezing the forming droplets of encapsulated materials as they were forming, to study the formation process in detail. She did this using a special spray-freezing system, and was able to observe exactly how the encapsulation works in order to control it better. Some of the encapsulated “payload” materials, whether they be pesticides or nutrients or enzymes, are water-soluble and some are not, and they interact in different ways with the coating material.

“To encapsulate different materials, we have to study how the polymer chains interact and whether they are compatible with different active materials in suspension,” she says. The payload material and the coating material are mixed together in a solution and then sprayed. As droplets form, the payload tends to be embedded in a shell of the coating material, whether that’s the original synthetic plastic or the new silk material.

The new method can make use of low-grade silk that is unusable for fabrics, and large quantities of which are currently discarded because they have no significant uses, Liu says. It can also use used, discarded silk fabric, diverting that material from being disposed of in landfills.

Currently, 90 percent of the world’s silk production takes place in China, Marelli says, but that’s largely because China has perfected the production of the high-quality silk threads needed for fabrics. But because this process uses bulk silk and has no need for that level of quality, production could easily be ramped up in other parts of the world to meet local demand if this process becomes widely used, he says.

“This elegant and clever study describes a sustainable and biodegradable silk-based replacement for microplastic encapsulants, which are a pressing environmental challenge,” says Alon Gorodetsky, an associate professor of chemical and biomolecular engineering at the University of California at Irvine, who was not associated with this research. “The modularity of the described materials and the scalability of the manufacturing processes are key advantages that portend well for translation to real-world applications.”

This process “represents a potentially highly significant advance in active ingredient delivery for a range of industries, particularly agriculture,” says Jason White, director of the Connecticut Agricultural Experiment Station, who also was not associated with this work. “Given the current and future challenges related to food insecurity, agricultural production, and a changing climate, novel strategies such as this are greatly needed.”

The research team also included Pierre-Eric Millard, Ophelie Zeyons, Henning Urch, Douglas Findley and Rupert Konradi from the BASF corporation, in Germany and in the U.S. The work was supported by BASF through the Northeast Research Alliance (NORA).