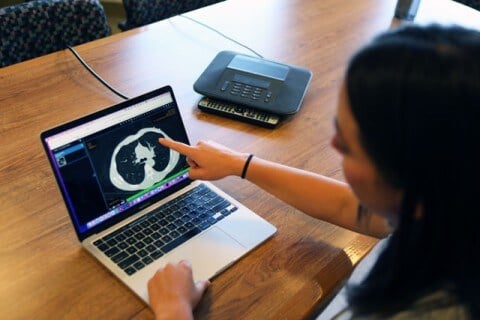 The most common test to measure a person’s lung function — spirometry — may be missing many people with impaired lung health, a new Northwestern Medicine study has found.

Although their spirometry readings appear “normal,” a substantial portion of adults actually have emphysema when imaged with CT scans, reports the study. This is disproportionately seen among Black men, who have significantly higher rates of emphysema than white men, despite having similar estimates of lung function.

Lower lung function in Black adults has been normalized

The study found the current, race-specific approach to interpreting spirometry — which judges a person’s lung function against the healthy population of someone of the same age, height, weight, sex and race — normalizes lower lung function in Black adults and non-white populations compared to white populations.

“Using our current method of spirometry interpretation, a Black man’s lung function could be considered ‘normal’ while the lung function of a white man of the same height, weight, age and lung function could be considered ‘abnormal’ because it’s lower than what would be referenced to his healthy population,” said first author Dr. Gabrielle Liu, instructor of pulmonary and critical care medicine at Northwestern University Feinberg School of Medicine and a Northwestern Medicine physician. “These reference values are normalizing decades and maybe even centuries of structural inequities of health.

“It’s not that there are intrinsic differences based on a person’s race, but those ‘healthy’ populations are taken from populations in the past that have also been affected by social and environmental risk factors for poor health outcomes.”

Emphysema, one of the diseases that comprises chronic obstructive pulmonary disease (COPD), is a condition in which the air sacs of the lungs are damaged and enlarged, causing breathlessness. Over three million people in the U.S. have been diagnosed with emphysema. It is one of the most preventable respiratory illnesses because it is so strongly linked to smoking.

“Black people in the United States have greater burden of emphysema than white people, and because of how we diagnose COPD using lung function tests, we likely miss a lot of people with impaired respiratory health even though they have structural lung disease,” said senior author Dr. Ravi Kalhan, professor of pulmonary and critical care medicine and epidemiology at Feinberg and a Northwestern Medicine pulmonologist.

Under-recognizing emphysema in patients with normal spirometry could lead to a lack of follow-up visits, continuation of smoking and failure to partake in other preventive measures.

Physicians should consider ordering CT scans for adults with suspected abnormal lung health who have normal spirometry, the study authors said. This allows physicians to better examine the lung airways and lung tissue, which are damaged in patients with emphysema.

The study participants were Black and white adults from the longitudinal CARDIA study, which has been ongoing since 1985. Participants had spirometry tests and CT scans of their chest performed when they were between 50 and 55 years old, on average. The scientists examined participants with different measures of normal lung function and compared the rates of emphysema among Black adults versus white adults. They did further testing to see whether racial differences in rates of emphysema changed if race-neutral estimates of lung function were used instead of standard race-specific estimates of lung function.