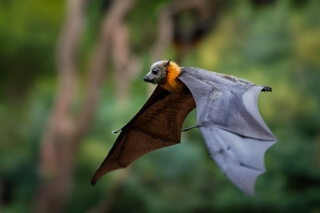 Many mammal species living in cold climates tend to have large bodies and short limbs to reduce heat loss – a general pattern known as Bergmann’s rule.

However, bats are the exception to the rule, displaying small body sizes in both hot and cold regions. A McGill-led team of researchers is shedding light on this long-standing debate over bats’ body sizes and focus on why bats are seemingly non-conforming to ecogeographical patterns found in other mammals. Their findings offer a new method for investigating complex macroecology across bat species.

The (energy) cost of flight

“Measuring energy requirements for temperature regulation and locomotion in wild animals is challenging. In bats, this is compounded by the fact that certain key features such as metabolic rate and body temperature vary substantially when individuals are captured to carry out these measurements,” explains Juan G. Rubalcaba, Marie Skłodowska-Curie Postdoctoral Fellow in McGill’s Department of Biology. “As a result, we know little about the energetic processes driving the evolution of morphology, feeding strategies, and other traits that make bats a unique group of mammals”.

Bats require a significant amount of energy to oppose body weight during flight, thus limiting the maximum size they can attain. To investigate this theory, the team used a model based on thermodynamic and aerodynamic principles to calculate how body size and wing surface area affects heat dissipation rates from the body and wing membranes and the drift forces experienced at flight.

The team carried out an analysis of the wing surface area-to-mass ratio in close to 300 bat species and their results supported the model’s prediction that body shape evolves towards an optimal ratio. High surface areas relative to body mass increases heat dissipation rates and thus the cost of maintaining optimal body temperature, whereas a high body mass elevates the cost of flight.

In addition, the research revealed that the strength of selection toward the optimal ratio was relatively high in species from cold climates, where the costs of thermoregulation are higher. These results suggest that selective forces that act to reduce the energy costs of flight prevent bat species in cold areas from having a large body size to help maintain body heat.

“Understanding the factors and processes driving the evolution of organisms is critical to forecast their responses to environmental change,” says Dr. Rubalcaba, lead author of the study. “We hope our new approach of calculating the energetic requirements of bats in relation to climatic conditions, may be applied to investigating the physiological impacts of climate change across all bat species.”

“Physical constraints on thermoregulation and flight drive morphological evolution in bats” by Juan G. Rubalcaba and al. was published in PNAS.