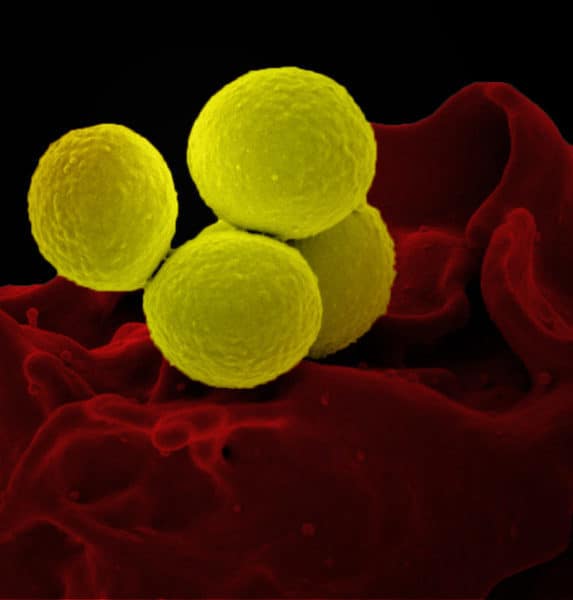 The bacterium Staphylococcus aureus has long been known to cause infections in humans, ranging from mild skin infections to pneumonia to more serious infections of the heart. In high-income countries, it’s the leading cause of a sometimes-fatal condition known as infective endocarditis, involving inflammation of the heart’s valves or lining.

Now, in a new study, researchers at the University of Wisconsin School of Veterinary Medicine describe another way the bacterium can cause harm: by undermining the body’s ability to heal from those infections.

The findings may point the way toward improving treatment of infections with S. aureus, more commonly called a staph infection.

The S. aureus bacteria produce small toxins, called superantigens, that bind to white blood cells and over-activate the immune system, which can cause complications for the circulatory system. The study in rabbits, published recently in Science Advances, found that a superantigen called SEC (superantigen staphylococcal enterotoxin C) prevents injured blood vessels from healing. It also stops the formation of new branching blood vessels crucial to the wound repair process.

“The role of many immune system molecules is to make the vessels around the infection more permeable, so they can enter and heal the infection,” explains senior author Wilmara Salgado-Pabón, professor of pathobiological sciences. “But when superantigens hyperactivate the immune system, your blood vessels can become leaky, leading to low blood pressure and organ dysfunction.”

When an area of the body has suffered injury, it will form tiny branching blood vessels called capillaries, which send nutrients and oxygen to the damaged area. Using what’s called the aortic root model, researchers sliced small sections of a rabbit’s aortic artery to imitate an injury. These ring slices were unable to form new capillaries in the presence of SEC, hindering the vascular system from healing the injury.

The model works well, says Salgado-Pabón, “because it allows us to test capillary formation — which can be complex — in a laboratory environment, with all of the elements you would expect in the body.”

Infective endocarditis disproportionately affects Black and Indigenous populations, as well as people predisposed to infection — such as the elderly, people with diabetes and people who smoke.

The condition is responsible for high rates of in-hospital mortality, as it progresses very quickly and can go on to cause complications in other organs throughout the body, Salgado-Pabón says.

Over the last 50 years, treatment for infective endocarditis has remained largely unchanged, currently consisting of a six-week course of antibiotics or heart surgery to clear the infection. The new findings offer potential for developing new and better approaches.

“You could not only neutralize the toxins’ vascular effects, but you could possibly treat patients to improve their vascular health,” says Salgado-Pabón, whose work is supported by the National Institutes of Health. “By strengthening a patient’s vascular health, you could proactively prevent the complications that lead to fatality.”

Now that the lab has identified this new biological function, it is working to define the structures and molecules that are critical to the process, including identifying the molecules SEC interacts with and defining the cellular receptors that react to the toxin’s presence.