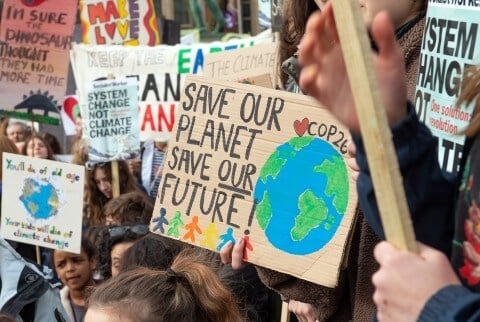 What does media coverage of climate change have in common with coverage of COVID-19? Each has been an example of the media practice of “bothsidesism,” whereby journalists strive to present both sides of an issue, even in cases where most credible sources fall on one side.

Bothsidesism — also referred to as false balance reporting — can damage the public’s ability to distinguish fact from fiction and lead audiences to doubt the scientific consensus on pressing societal challenges like climate change, a new Northwestern University study has found.

“The devastating heat wave in Europe this week is a reminder that we need to take urgent action to slow human-caused warming, but the media is still giving air to the opinions of people who do not believe there is cause for alarm, which makes the problem seem less dire than it actually is,” said David Rapp, a psychologist and professor at Northwestern’s School of Education and Social Policy (SESP) who coauthored the research, which was published July 18, 2022, in the Journal of Applied Research in Memory and Cognition.

The argument that climate change is not man made has been incontrovertibly disproven by science again and again, yet many Americans believe that the global crisis is either not real, not of our making, or both, in part because the news media has given climate change deniers a platform in the name of balanced reporting, according to the researchers.

In the study, the researchers found that false-balance reporting can make people doubt the scientific consensus on issues like climate change, sometimes making them wonder if an issue is even worth taking seriously.

Debates about the efficacy of mask-wearing to prevent COVID-19 from spreading are another relevant example, Rapp said. Physicians broadly agree that it’s beneficial, but elevating the voices of a few people who disagree can cause unnecessary confusion.

“Climate change is a great case study of the false balance problem, because the scientific consensus is nearly unanimous. If 99 doctors said you needed surgery to save your life, but one disagreed, chances are you’d listen to the 99,” Rapp said. “But we often see one climate scientist pitted against one climate denier or down player, as if it’s a 50-50 split.”

To conduct the study, the researchers performed three experiments to test how people would respond when two positions about climate change were presented as equally valid perspectives, even though one side was based on scientific agreement and the other was not.

“When both sides of an argument are presented, people tend to have lower estimates about scientific consensus and seem to be less likely to believe climate change is something to worry about,” Rapp said.

Presenting seemingly equal sides, he said, can prompt one of three problematic results: doubt about whether there is consensus; confusion about what’s true; and a tendency to prefer the more placating option, i.e., “Someone’s arguing that climate change is not something to worry about, so I won’t worry.”

The research validates concerns that some journalists and newsroom leaders have been raising for years. Rapp has also studied memory, and his work in this area explains why we might be susceptible to misinformation found in media, even if it is presented as opinion rather than fact.

“People think anything they can easily recall is likely to be true. If that’s false or misleading information that the media parroted or gave a platform to, the person will still give weight to it if it crops up again later because they’ve heard it once before,” Rapp said.

To break the cycle, Rapp and study coauthor Megan Imundo, ’18, a former Northwestern undergraduate who is now a doctoral student at the University of California, Los Angeles, found one promising strategy that newsroom leaders could use to help readers, even when “both sides” are presented: Emphasizing the broader consensus of experts on climate change reduced the weight the study participants gave to climate change deniers.

“If you can remind people about the consensus view, they take that up and they use it,” Rapp said.