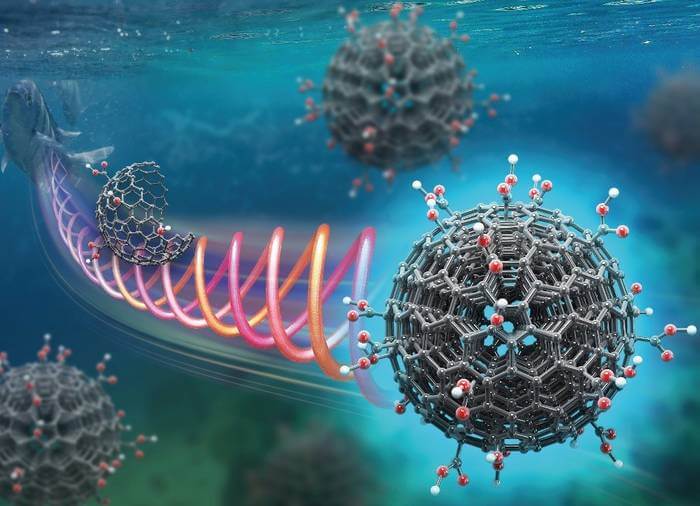 A synthesis procedure developed by NITech scientists can convert fish scales obtained from fish waste into a useful carbon-based nanomaterial. Their approach uses microwaves to break the scales down thermally via pyrolysis in less than 10 seconds, yielding carbon nano-onions with unprecedented quality compared with those obtained from conventional methods.

Thanks to their low toxicity, chemical stability, and remarkable electrical and optical properties, carbon-based nanomaterials are finding more and more applications across electronics, energy conversion and storage, catalysis, and biomedicine. Carbon nano-onions (CNOs) are certainly no exception. First reported in 1980, CNOs are nanostructures composed of concentric shells of fullerenes, resembling cages within cages. They offer multiple attractive qualities such as a high surface area and large electrical and thermal conductivities.

Unfortunately, the conventional methods for producing CNOs have some serious drawbacks. Some require harsh synthesis conditions, such as high temperatures or vacuum, while others demand a lot of time and energy. Some techniques can circumvent these limitations, but instead call for complex catalysts, expensive carbon sources, or dangerous acidic or basic conditions. This greatly limits the potential of CNOs.

Fortunately, not all hope is lost. In a recent study published in Green Chemistry (available online on April 25, 2022, and published in issue 10 on May 21, 2022), a team of scientists from Nagoya Institute of Technology in Japan found a simple and convenient way to turn fish waste into extremely high-quality CNOs. The team, which included Assistant Professor Yunzi Xin, Master’s student Kai Odachi, and Associate Professor Takashi Shirai, developed a synthesis route in which fish scales extracted from fish waste after cleaning are converted into CNOs in mere seconds through microwave pyrolysis.

But how can fish scales be converted into CNOs so easily? While the exact reason is not altogether clear, the team believes that it has to do with the collagen contained in fish scales, which can absorb enough microwave radiation to produce a fast rise in temperature. This leads to thermal decomposition or “pyrolysis,” which produces certain gases that support the assembly of CNOs. What is remarkable about this approach is that it needs no complex catalysts, nor harsh conditions, nor prolonged wait times; the fish scales can be converted into CNOs in less than 10 seconds!

Moreover, this synthesis process yields CNOs with very high crystallinity. This is remarkably difficult to achieve in processes that use biomass waste as a starting material. Additionally, during synthesis, the surface of the CNOs is selectively and thoroughly functionalized with (−COOH) and (−OH) groups. This is in stark contrast to the surface of CNOs prepared with conventional methods, which is typically bare and has to be functionalized through additional steps.

This “automatic” functionalization has important implications for applications of CNOs. When the CNO surface is not functionalized, the nanostructures tend to stick together owing to an attractive interaction known as pi−pi stacking. This makes it difficult to disperse them in solvents, which is necessary in any application requiring solution-based processes. However, since the proposed synthesis process produces functionalized CNOs, it allows for an excellent dispersibility in various solvents.

Yet another advantage associated with functionalization and the high crystallinity, is that of exceptional optical properties. Dr. Shirai explains: “The CNOs exhibit ultra-bright visible-light emission with an efficiency (or quantum yield) of 40%. This value, which has never been achieved before, is about 10 times higher than that of previously reported CNOs synthesized via conventional methods.”

To showcase some of the many practical applications of their CNOs, the team demonstrated their use in LEDs and blue-light-emitting thin films. The CNOs produced a highly stable emission, both inside solid devices and when dispersed in various solvents, including water, ethanol, and isopropanol. “The stable optical properties could enable us to fabricate large-area emissive flexible films and LED devices,” speculates Dr. Shirai. “These findings will open up new avenues for the development of next-generation displays and solid-state lighting.”

Furthermore, the proposed synthesis technique is environmentally friendly and provides a straightforward way to convert fish waste into infinitely more useful materials. The team believes their work would contribute to the fulfillment of several of UN’s Sustainable Development Goals. Additionally, if CNOs make their way into next-generation LED lighting and QLED displays, they could greatly help reduce their manufacturing costs.

Let us hope the efforts of these scientists tip the scales in favor of CNOs for more practical applications!