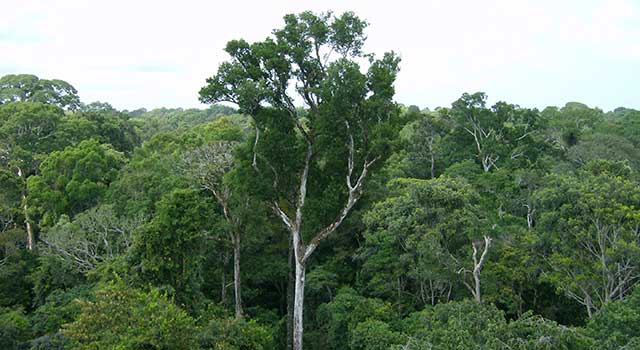 The results show that, within the offset program’s first 10 years, estimated carbon losses from wildfires have depleted at least 95% of the contributions set aside to protect against all fire risks over 100 years. This means that the buffer pool is unable to guarantee that credited forest carbon remains out of the atmosphere for at least 100 years. The results, published in Frontiers in Forests and Global Change, illustrate that the program, one of the world’s largest, is likely not meeting its set requirements.

Carbon offset programs have become popular action plans to combat the climate crisis. California’s carbon offset program was established to utilize the ability of trees to absorb and store carbon and applies to around 75% of statewide emissions allowances.

The program allows forest owners to earn ‘carbon credits’ for preserving trees. Polluters buy credits so that they can emit more CO2 than they’d otherwise be allowed to under state law. Each credit represents one ton of CO2. This exchange is supposed to balance out emissions to prevent an overall increase of CO2 in the atmosphere.

“Fossil CO2 emissions have permanent consequences, but carbon stored in trees won’t last forever. Forests face a wide variety of risks, including drought, disease, and — as the last few years in the American west have made painfully clear — wildfires.”

The durability of carbon stored in such temporary pools is therefore important to consider when evaluating the efficacy of climate crisis mitigation strategies.

As California law requires a storage duration of at least 100 years, the California Air Resources Board, which implements the state’s primary climate law, has developed a self-insurance mechanism called a buffer pool.

“Individual projects affiliated with the program contribute a share of the credits they earn to the buffer pool, which then stands ready to absorb any losses when trees in participating forests die and release their carbon back to the atmosphere. So long as there are credits in the buffer pool, the program is properly insured against future risks to forest health,” continued Cullenward.

Cullenward and his colleagues have previously researched California’s forest offset program, and now looked at the performance and durability of the buffer pool.

They found that the estimated carbon losses from wildfires within the offset program’s first 10 years have depleted at least 95% of the contributions set aside to protect against all fire risks over 100 years. Likewise, the potential carbon losses associated with a single disease and its impacts on a single species are large enough to fully hinder the total credits set aside for all disease- and insect-related mortality over 100 years.

“In just 10 years, wildfires have exhausted protections designed to last for a century. It is incredibly unlikely that the program will be able to withstand the wildfires of the next 90 years, particularly given the role of the climate crisis in exacerbating fire risks,” said co-author Dr Oriana Chegwidden, of CarbonPlan.

Wildfires and disease pose a threat

The researchers performed an actuarial analysis (an analysis that assesses the probability of an event and its financial consequences) of the buffer pool’s performance to estimate actual carbon losses from two specific durability risks: historical wildfires and estimated losses from disease and insects, in this case sudden oak death that affects tanoak. The study covers the program from its beginning, in 2013, through the end of 2021.

Their analysis shows that the buffer pool is severely undercapitalized. This means that the program’s supposed self-insurance mechanism does not justify ongoing CO2 pollution from companies on the basis of mitigation achieved through forest management schemes.

The future of forest offset programs

The study shows a fundamental design problem with California’s forest carbon offset program. The climate crisis is accelerating and intensifying risks such as wildfires, diseases, and droughts. From the results, it looks like California’s buffer pool is not prepared to deal with such risks.

“The problems we observe here aren’t unique to the California program and raise broader concerns about the integrity of offsets’ permanence claims,” concluded co-author Freya Chay, of CarbonPlan.