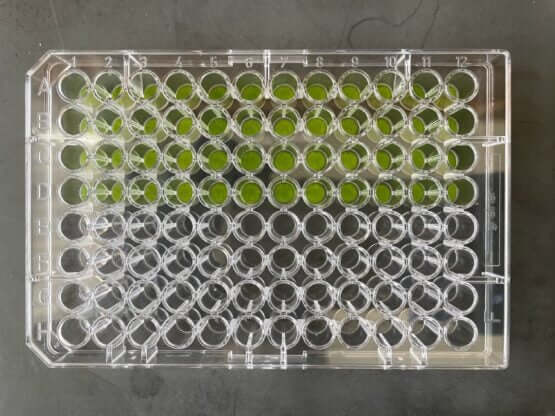 The activity of synthetic genetic circuits that process the presence or absence of specific signals in plant leaves was measured in high throughput by placing leaf punches in 96-well plates. When the correct combinations of inputs are delivered to leaves, they fluoresce green, and the fluorescence can be measured using a plate reader. (Image credit: Jennifer Brophy)

Increasingly, global food production is being threatened by the effects of climate change. As floods, droughts, and extreme heat waves become more common, crops need to be able to adapt faster than ever.

Researchers at Stanford University are working on ways to manipulate biological processes in plants to help them grow more efficiently and effectively in a variety of conditions. Jennifer Brophy, an assistant professor of bioengineering, and her colleagues have designed a series of synthetic genetic circuits that allow them to control the decisions made by different types of plant cells. In a paper published recently in Science, they used these tools to grow plants with modified root structures. Their work is the first step in designing crops that are better able to collect water and nutrients from the soil and provides a framework for designing, testing, and improving synthetic genetic circuits for other applications in plants.

“Our synthetic genetic circuits are going to allow us to build very specific root systems or very specific leaf structures to see what is optimal for the challenging environmental conditions that we know are coming,” Brophy said. “We’re making the engineering of plants much more precise.”

A programming code for plants

Current genetically modified crop varieties use relatively simple, imprecise systems that cause all of their cells to express the genes necessary to, say, resist herbicides or pests. To achieve fine-scale control over plant behavior, Brophy and her colleagues built synthetic DNA that essentially works like a computer code with logic gates guiding the decision-making process. In this case, they used those logic gates to specify which types of cells were expressing certain genes, allowing them to adjust the number of branches in the root system without changing the rest of the plant.

The depth and shape of a plant’s root system affect how efficient it is at pulling different resources out of the soil. A shallow root system with many branches, for example, is better at absorbing phosphorus (which stays near the surface), while a deeper root system that branches at the bottom is better at collecting water and nitrogen. Using these synthetic genetic circuits, researchers could grow and test various root designs to create the most efficient crops for different circumstances. Or, in the future, they could give plants the ability to optimize themselves.

“We have modern varieties of crops that have lost their ability to respond to where soil nutrients are,” said José Dinneny, an associate professor of biology in the School of Humanities and Sciences and one of the lead authors on the paper. “The same sort of logic gates that control root branching could be used to, say, create a circuit that takes into account both the nitrogen and phosphorus concentrations in the soil, and then generates an output that is optimal for those conditions.”

From model organisms to modern crops

Brophy designed more than 1,000 potential circuits to be able to manipulate gene expression in plants. She tested them in the leaves of tobacco plants, seeing if she could make the leaf cells create a glow-in-the-dark protein found in jellyfish. She found 188 designs that worked, which the researchers are uploading to a synthetic DNA database for other scientists to be able to use in their work.

Once they had working designs, the researchers used one of the circuits to create logic gates that would modify the expression of a specific developmental gene in a precisely defined type of root cell of Arabidopsis thaliana, a small, weedy plant that is often used as a model organism. By changing the expression level of that one gene, they were able to modify the density of branches in the root system.

Now that they’ve demonstrated that they can change the growth structure of a model organism, the researchers intend to apply these same tools to commercial crops. They’re investigating the possibility of using their genetic circuits to manipulate root structure in sorghum, a plant that can be refined into biofuel, to help it absorb water and perform photosynthesis more efficiently.

“Climate change is altering the agricultural conditions in which we grow the plants that we rely on for food, fuels, fibers, and raw materials for medicines,” Brophy said. “If we’re not able to produce those plants at scale, we’re going to be facing a lot of problems. This work is to help ensure that we will have plant varieties that we can grow, even if the environmental conditions that we’re growing them in become less favorable.”

This work was funded by the U.S. Department of Energy, the Burroughs Wellcome Fund, the Chan Zuckerberg Biohub, and the HHMI-Simons Faculty Scholars program.