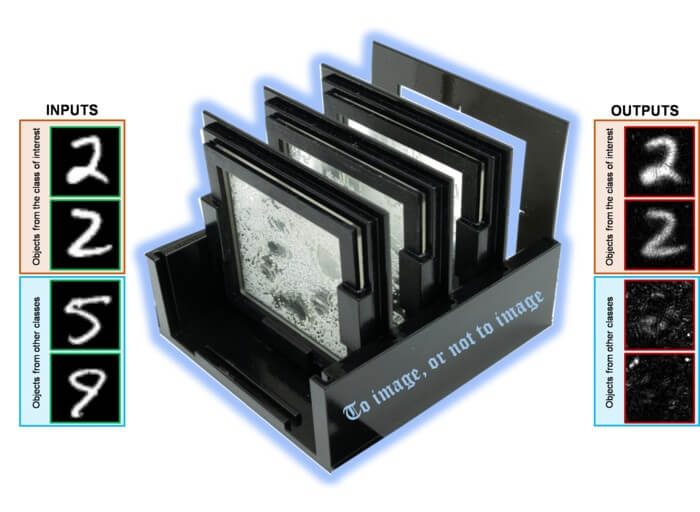 Over the past decade, digital cameras have been widely adopted in various aspects of our society, and are being massively used in mobile phones, security surveillance, autonomous vehicles, and facial recognition.

Through these cameras, enormous amounts of image data are being generated constantly, which raises growing concerns about privacy protection.

Some existing methods address these concerns by applying algorithms to conceal sensitive information from the acquired images, such as image blurring or encryption. However, such methods still risk sensitive data exposure because the raw images are already captured before they undergo digital processing to hide or encrypt the sensitive information. Also, the computation of these algorithms requires additional power consumption. Other efforts were also made to seek solutions using customized cameras to downgrade the image quality so that identifiable information can be concealed. However, these approaches sacrifice the overall image quality for all the objects of interest, which is undesired, and they are still vulnerable to adversarial attacks to retrieve the sensitive information that is recorded.

A new research paper published in eLight demonstrated a new paradigm to achieve privacy-preserving imaging by building a fundamentally new type of imager designed by AI. In their paper, UCLA researchers, led by Professor Aydogan Ozcan, presented a smart camera that images only certain types of desired objects, while instantaneously erasing other types of objects from its images without requiring any digital processing.

This new camera design consists of successive transmissive surfaces, each composed of tens of thousands of diffractive features at the scale of the wavelength of light. The structure of these transmissive surfaces is optimized using deep learning to modulate the phase of the transmitted optical fields such that the camera only images certain types/classes of desired objects and erases the others. After its deep learning-based design (training), the resulting layers are fabricated and assembled in 3D, forming the smart camera. After its assembly, when the input objects from the target classes of objects appear in front of it, they form high-quality images at the camera’s output. In contrast, when the input objects in front of the same camera belong to other undesired classes, they are optically erased, forming non-informative and low-intensity patterns similar to random noise.

Since the characteristic information of undesired classes of objects is all-optically erased at the output through light diffraction, this AI-designed camera never records their direct images. Therefore, the protection of privacy is maximized since an adversarial attack that has access to the recorded images of this camera cannot bring the information back. This feature can also reduce cameras’ image storage and transmission load since the images of undesired objects are not recorded.

To experimentally demonstrate this unique data-specific camera, the UCLA research team designed it to specifically and selectively image only one class of handwritten digits, and fabricated the designed camera using 3D printing. This 3D fabricated camera was tested using terahertz waves illuminating handwritten digits. Following the core principles of its design, the smart camera was able to selectively image the input objects only if they were handwritten digits “2”, while instantaneously erasing all the other handwritten digits from the output images, yielding low-intensity noise-like features. Furthermore, the research team rigorously tested their camera design under varying lighting conditions that were never included in its training, and showed that this smart camera is robust to such variations in illumination.

Beyond data class-specific imaging, this AI-based camera design can be used to build encryption cameras, providing an additional layer of security and privacy protection. Such an encryption camera, designed using AI-optimized diffractive layers, optically performs a selected linear transformation exclusively for the target objects of interest. Only those with access to the decryption key (i.e., the inverse linear transformation in this case) can recover the original image of the target objects. On the other hand, the information of the other undesired objects is irreversibly lost since the AI-designed camera all-optically erases them at the output. Therefore, even if the decryption key is applied to the recorded images, it yields noise-like features for other classes of undesired objects.

Except for the illumination light, this smart camera does not require any external power for its computation and operates at the speed of light. Therefore, it is fast, data- and energy-efficient, making it especially suitable for task-specific, privacy-aware, and power-limited imaging applications. The core teachings of this diffractive camera design can inspire future imaging systems that consume orders of magnitude less computing and data transmission power.

This research was led by Professor Aydogan Ozcan, the associate director of the California NanoSystems Institute (CNSI) and the Volgenau Chair for Engineering Innovation at the Electrical and Computer Engineering (ECE) department at UCLA, along with Professor Mona Jarrahi, the Northrop Grumman Endowed Chair and the director of the Terahertz Electronics Laboratory at UCLA ECE. The other authors of this work include graduate students Bijie Bai, Yi Luo, Tianyi Gan, Yuhang Li, Yifan Zhao, Deniz Mengu and post-doctoral researcher Dr. Jingtian Hu, all with the ECE department at UCLA.

The authors report the support of the US Office of Naval Research and the Department of Energy.