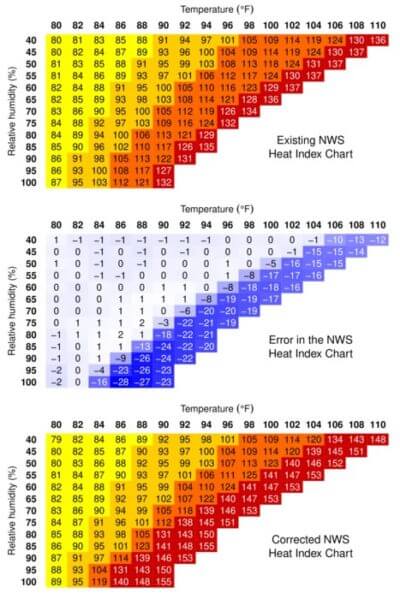 The long-used Heat Index table (top) underestimates the apparent temperature for the most extreme heat and humidity conditions occurring today (center). The corrected version (bottom) is accurate over the entire range of temperatures and humidities humans will encounter with climate change.

If you looked at the heat index during this summer’s sticky heat waves and thought, “It sure feels hotter!,” you may be right.

An analysis by climate scientists at the University of California, Berkeley, finds that the apparent temperature, or heat index, calculated by meteorologists and the National Weather Service (NWS) to indicate how hot it feels — taking into account the humidity — underestimates the perceived temperature for the most sweltering days we’re now experiencing, sometimes by more than 20 degrees Fahrenheit.

The finding has implications for those who suffer through these heat waves, since the heat index is a measure of how the body deals with heat when the humidity is high, and sweating becomes less effective at cooling us down. Sweating and flushing, where blood is diverted to capillaries close to the skin to dissipate heat, plus shedding clothes, are the main ways humans adapt to hot temperatures.

A higher heat index means that the human body is more stressed during these heat waves than public health officials may realize, the researchers say. The NWS currently considers a heat index above 103 to be dangerous, and above 125 to be extremely dangerous.

“Most of the time, the heat index that the National Weather Service is giving you is just the right value. It’s only in these extreme cases where they’re getting the wrong number,” said David Romps, UC Berkeley professor of earth and planetary science. “Where it matters is when you start to map the heat index back onto physiological states and you realize, oh, these people are being stressed to a condition of very elevated skin blood flow where the body is coming close to running out of tricks for compensating for this kind of heat and humidity. So, we’re closer to that edge than we thought we were before.”

Romps and graduate student Yi-Chuan Lu detailed their analysis in a paper accepted by the journal Environmental Research Letters and posted online Aug. 12.

The heat index was devised in 1979 by a textile physicist, Robert Steadman, who created simple equations to calculate what he called the relative “sultriness” of warm and humid, as well as hot and arid, conditions during the summer. He saw it as a complement to the wind chill factor commonly used in the winter to estimate how cold it feels.

His model took into account how humans regulate their internal temperature to achieve thermal comfort under different external conditions of temperature and humidity — by consciously changing the thickness of clothing or unconsciously adjusting respiration, perspiration and blood flow from the body’s core to the skin.

In his model, the apparent temperature under ideal conditions — an average-sized person in the shade with unlimited water — is how hot someone would feel if the relative humidity were at a comfortable level, which Steadman took to be a vapor pressure of 1,600 pascals.

The heat index has since been adopted widely in the United States, including by the NWS, as a useful indicator of people’s comfort. But Steadman left the index undefined for many conditions that are now becoming increasingly common. For example, for a relative humidity of 80%, the heat index is not defined for temperatures above 88 F or below 59 F. Today, temperatures routinely rise above 90 F for weeks at a time in some areas, including the Midwest and Southeast.

To account for these gaps in Steadman’s chart, meteorologists extrapolated into these areas to get numbers that, Romps said, are correct most of the time, but not based on any understanding of human physiology.

“There’s no scientific basis for these numbers,” Romps said.

He and Lu set out to extend Steadman’s work so that the heat index is accurate at all temperatures and all humidities between zero and 100%.

“The original table had a very short range of temperature and humidity and then a blank region where Steadman said the human model failed,” Lu said. “Steadman had the right physics. Our aim was to extend it to all temperatures so that we have a more accurate formula.”

One condition under which Steadman’s model breaks down is when people perspire so much that sweat pools on the skin. At that point, his model incorrectly had the relative humidity at the skin surface exceeding 100%, which is physically impossible.

“It was at that point where this model seems to break, but it’s just the model telling him, hey, let sweat drip off the skin. That’s all it was,” Romps said. “Just let the sweat drop off the skin.”

That and a few other tweaks to Steadman’s equations yielded an extended heat index that agrees with the old heat index 99.99% of the time, Romps said, but also accurately represents the apparent temperature for regimes outside those Steadman originally calculated. When he originally published his apparent temperature scale, he considered these regimes too rare to worry about, but high temperatures and humidities are becoming increasingly common because of climate change.

Romps and Lu published the revised heat index equation earlier this year. In the most recent paper, they apply the extended heat index to the top 100 heat waves that occurred between 1984 and 2020. The researchers find mostly minor disagreements with what the NWS reported at the time, but also some extreme situations where the NWS heat index was way off.

One surprise was that seven of the 10 most physiologically stressful heat waves over that time period were in the Midwest — mostly in Illinois, Iowa and Missouri — not the Southeast, as meteorologists assumed. The largest discrepancies between the NWS heat index and the extended heat index were seen in a wide swath, from the Great Lakes south to Louisiana.

During the July 1995 heat wave in Chicago, for example, which killed at least 465 people, the maximum heat index reported by the NWS was 135 F, when it actually felt like 154 F. The revised heat index at Midway Airport, 141 F, implies that people in the shade would have experienced blood flow to the skin that was 170% above normal. The heat index reported at the time, 124 F, implied only a 90% increase in skin blood flow. At some places during the heat wave, the extended heat index implies that people would have experienced an increase of 820% above normal skin blood flow.

“I’m no physiologist, but a lot of things happen to the body when it gets really hot,” Romps said. “Diverting blood to the skin stresses the system because you’re pulling blood that would otherwise be sent to internal organs and sending it to the skin to try to bring up the skin’s temperature. The approximate calculation used by the NWS, and widely adopted, inadvertently downplays the health risks of severe heat waves.”

Physiologically, the body starts going haywire when the skin temperature rises to equal the body’s core temperature, typically taken as 98.6 F. After that, the core temperature begins to increase. The maximum sustainable core temperature is thought to be 107 F — the threshold for heat death. For the healthiest of individuals, that threshold is reached at a heat index of 200 F.

Luckily, humidity tends to decrease as temperature increases, so Earth is unlikely to reach those conditions in the next few decades. Less extreme, though still deadly, conditions are nevertheless becoming common around the globe.

“A 200 F heat index is an upper bound of what is survivable,” Romps said. “But now that we’ve got this model of human thermoregulation that works out at these conditions, what does it actually mean for the future habitability of the United States and the planet as a whole? There are some frightening things we are looking at.”

The work was supported by the U.S. Department of Energy’s Atmospheric System Research program through the Office of Science’s Biological and Environmental Research program (DE-AC02-05CH11231).