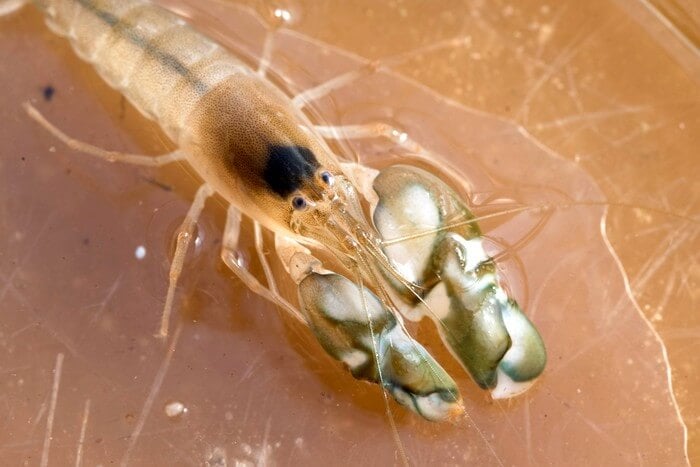 In a first study of its kind, WHOI scientists have established a clear relationship between rising temperatures and the frequency and volume of the sound emitted by snapping shrimp. Snapping shrimp, which create a pervasive crackling noise that sounds like bacon frying, are among the loudest marine animals.

In a warming ocean, snapping shrimp might be the acoustic canary in the coal mine.

In the first study of its kind, WHOI marine ecologists Ashlee Lillis and T. Aran Mooney established a clear relationship between rising temperatures and the frequency and volume of the sound emitted by two snapping shrimp species, with implications for underwater navigation and communication for both humans and animals. The continuous popping sounds made by snapping shrimp—which evoke the sound of sizzling bacon—are so loud and cover such a wide acoustic range that it interferes with ship sonar and fish finders. Research shows that whales and dolphins may rely on the sound of snapping shrimp to orient themselves along the coast, and diverse soundscapes help attract fish, shellfish, and coral larvae to appropriate settling sites.

“These shrimp are the most ubiquitous sound producer in the ocean, and now we have evidence that temperature has a huge impact on their behavior and the overall soundscape,” said Lillis, a WHOI guest investigator and principle scientist at Sound Ocean Science. “That’s relevant to everything from migrating whales to larvae trying to use the soundscape, or humans who use the sea for extractive or military purposes.”

Lillis analyzed recordings of snapping shrimp from an oyster reef off the North Carolina coast and found an increase of 1 to 2 decibels, as well as a 15 to 60 percent increase in snapping frequency, for every Celsius degree rise in temperature. Put to the test in controlled lab setting, Lillis found that snap frequency more than doubled with water temperatures between 68F (20C) and 86F (30C), with some differences depending on the season or the shrimps’ social grouping.

The experiments simulated the effects of a short-term heat wave, so it’s not yet clear whether the shrimp might eventually adapt, or how the increased snapping could impact their physiology or the ecosystem over time. While temperature has long been understood to influence crustacean behavior, the effects of warming water on the overall marine soundscape is a crucial—and often overlooked—ramification of climate change, says Mooney.

“Climate change is impacting the marine soundscape in fundamental ways,” Mooney said. “Warming waters can influence how animals are physically able to communicate and use sound to reproduce and attract mates. We don’t yet know what happens to the ecosystem when background noise levels are higher, but there are far-reaching implications.”