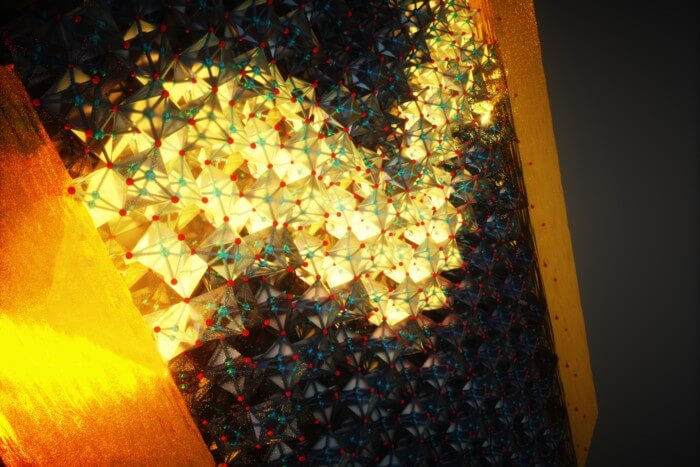 EPFL researchers have discovered that Vanadium Dioxide (VO2), a compound used in electronics, is capable of “remembering” the entire history of previous external stimuli. This is the first material to be identified as possessing this property, although there could be others.

Mohammad Samizadeh Nikoo, a PhD student at EPFL’s Power and Wide-band-gap Electronics Research Laboratory (POWERlab), made a chance discovery during his research on phase transitions in Vanadium Dioxide (VO2). VO2 has an insulating phase when relaxed at room temperature, and undergoes a steep insulator-to-metal transition at 68 °C, where its lattice structure changes. Classically, VO2 exhibits a volatile memory: “the material reverts back to the insulating state right after removing the excitation” says Samizadeh Nikoo. For his thesis, he set out to discover how long it takes for VO2 to transition from one state to another. But his research led him down a different path: after taking hundreds of measurements, he observed a memory effect in the material’s structure.

In his experiments, Samizadeh Nikoo applied an electric current to a sample of VO2. “The current moved across the material, following a path until it exited on the other side,” he explains. As the current heated up the sample, it caused the VO2 to change state. And once the current had passed, the material returned to its initial state. Samizadeh Nikoo then applied a second current pulse to the material, and saw that the time it took to change state was directly linked to the history of the material. “The VO2 seemed to ‘remember’ the first phase transition and anticipate the next,” explains Prof. Elison Matioli, who heads the POWERlab. “We didn’t expect to see this kind of memory effect, and it has nothing to do with electronic states but rather with the physical structure of the material. It’s a novel discovery: no other material behaves in this way.”

A memory of up to three hours

The researchers went on to find that VO2 is capable of remembering its most recent external stimulus for up to three hours. “The memory effect could in fact persist for several days, but we don’t currently have the instruments needed to measure that,” says Matioli.

The research team’s discovery is important because the memory effect they observed is an innate property of the material itself. Engineers rely on memory to perform calculations of all kinds, and materials that could enhance the calculation process by offering greater capacity, speed and miniaturization are in high demand. VO2 ticks all three of these boxes. What’s more, its continuous, structural memory sets it apart from conventional materials that store data as binary information dependent on the manipulation of electronic states.

The researchers performed a host of measurements to arrive at their findings. They also corroborated their results by applying the new method to different materials at other laboratories around the world. This discovery replicates well what happens in the brain, as VO2 switches act just like neurons.