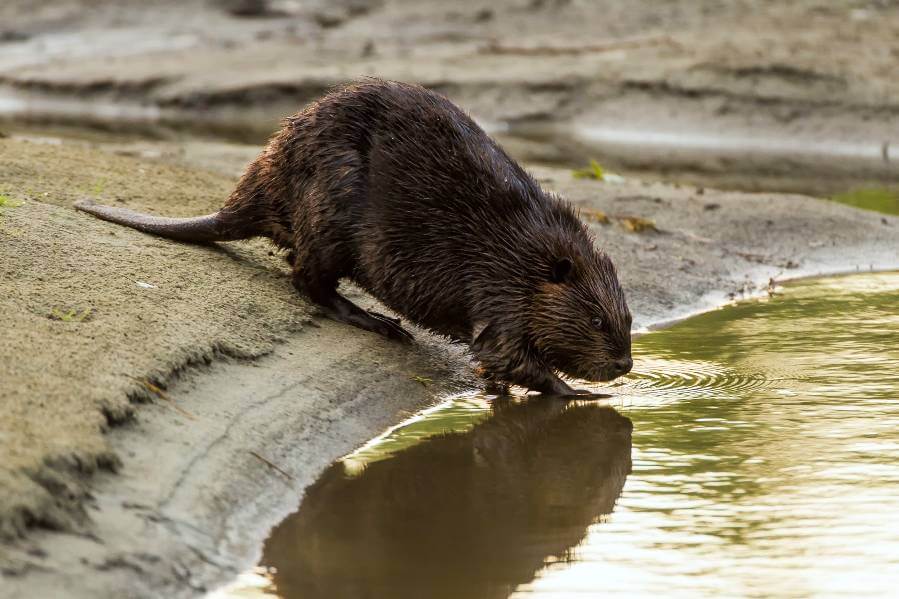 The newly identified species did not have the flat tail that helps modern beavers swim today. Microtheriomys articulaquaticus was comparably small, weighing less than 2 pounds. Modern adult beavers, like the one above photographed in Minnesota, weigh 50 pounds or so.

A new analysis of a beaver anklebone fossil found in Montana suggests the evolution of semi-aquatic beavers may have occurred at least 7 million years earlier than previously thought, and happened in North America rather than Eurasia.

In the study, Ohio State University evolutionary biologist Jonathan Calede describes the find as the oldest known amphibious beaver in the world and the oldest amphibious rodent in North America. He named the newly discovered species Microtheriomys articulaquaticus.

Calede’s findings resulted from comparing measurements of the new species’ anklebone to about 340 other rodent specimens to categorize how it moved around in its environment – which indicated this animal was a swimmer. The Montana-based bone was determined to be 30 million years old – the oldest previously identified semi-aquatic beaver lived in France 23 million years ago.

Beavers and other rodents can tell us a lot about mammalian evolution, said Calede, an assistant professor of evolution, ecology and organismal biology at Ohio State’s Marion campus.

“Look at the diversity of life around us today, and you see gliding rodents like flying squirrels, rodents that hop like the kangaroo rat, aquatic species like muskrats, and burrowing animals like pocket gophers. There is an incredible diversity of shapes and ecologies. When that diversity arose is an important question,” Calede said. “Rodents are the most diverse group of mammals on Earth, and about 4 in 10 species of mammals are rodents. If we want to understand how we get incredible biodiversity, rodents are a great system to study.”

The scientists, including Calede, who found the bones and teeth of the new beaver species in western Montana knew they came from beavers right away because of their recognizable teeth. But the discovery of an anklebone, about 10 millimeters long, opened up the possibility of learning much more about the animal’s life. The astragalus bone in beavers is the equivalent to the talus in humans, located where the shin meets the top of the foot.

Calede took 15 measurements of the anklebone fossil and compared it to measurements – over 5,100 in all – of similar bones from 343 specimens of rodent species living today that burrow, glide, jump and swim as well as ancient beaver relatives.

Running computational analyses of the data in multiple ways, he arrived at a new hypothesis for the evolution of amphibious beavers, proposing that they started to swim as a result of exaptation – the co-opting of an existing anatomy – leading, in this case, to a new lifestyle.

“In this case, the adaptations to burrowing were co-opted to transition to a semi-aquatic locomotion,” he said. “The ancestor of all beavers that have ever existed was most likely a burrower, and the semi-aquatic behavior of modern beavers evolved from a burrowing ecology. Beavers went from digging burrows to swimming in water.

“It’s not necessarily surprising because movement through dirt or water requires similar adaptations in skeletons and muscles.”

Fossils of fish and frogs and the nature of the rocks where Microtheriomys articulaquaticus fossils were found suggested it had been an aquatic environment, providing additional evidence to support the hypothesis, Calede said.

Fossils are usually dated based on their location between layers of rocks whose age is determined by the detection of the radioactive decay of elements left behind by volcanic activity. But in this case, Calede was able to age the specimen at a precise 29.92 million years old because of its location within, rather than above or below, a layer of ashes.

“I’m not claiming this new species is necessarily the oldest aquatic beaver ever, because there are other animals that we know, from their teeth, that are related to this species I described.”

Microtheriomys articulaquaticus did not have the flat tail that helps beavers swim today. It likely ate plants instead of wood and was comparably small – weighing less than 2 pounds. The modern adult beaver, weighing 50 pounds or so, is the second-largest living rodent after the capybara from South America.

Calede’s analysis of beaver body size over the past 34 million years suggests beaver evolution adheres to what is known as Cope’s Rule, which posits that organisms in evolving lineages increase in size over time. A giant beaver the size of a black bear lived in North America as recently as about 12,000 years ago. Like all but the two beaver species living today, Castor canadensis and Castor fiber, the giant beaver is extinct.

“It looks like when you follow Cope’s Rule, it’s not good for you – it sets you on a bad path in terms of species diversity,” Calede said. “We used to have dozens of species of beavers in the fossil record. Today we have one North American beaver and one Eurasian beaver. We’ve gone from a group that is super diverse and doing so well to one that is obviously not so diverse anymore.”