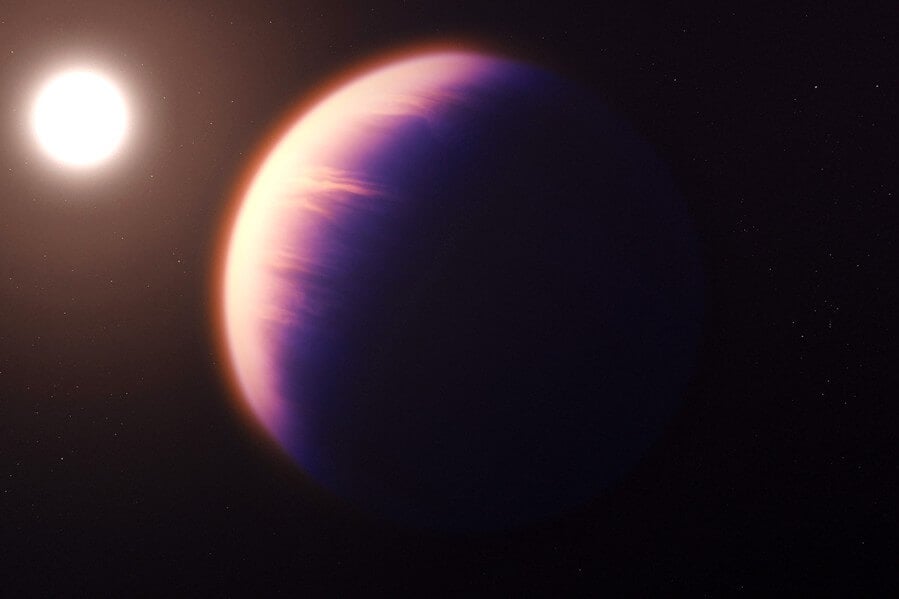 It is the first clear, detailed, indisputable evidence for carbon dioxide ever detected in a planet outside the solar system. The planet is called WASP-39 b.

AUniversity of Central Florida researcher is part of an international team that has used NASA’s James Webb Space Telescope (JWST) to capture definitive evidence for carbon dioxide in the atmosphere of a gas-giant planet orbiting a sun-like star 700 light-years away.

The finding was published online today and will appear in the journal Nature.

The discovery provides insights into the composition and formation of the planet and demonstrates JWST’s ability to detect and measure carbon dioxide in the thinner atmospheres of smaller rocky planets.

It is the first detailed, indisputable evidence for carbon dioxide ever detected on a planet outside the solar system. The planet is called WASP-39 b and is in the constellation Virgo. The team used JWST’s Near Infrared Spectrograph, or NIRSpec, and also detected another molecule that has yet to be identified.

“All prior observatories, Hubble, Spitzer, ground based, you name it, were struggling to be able to detect carbon dioxide,” Harrington says. “Before, we had a very noisy signal, and you really couldn’t see anything. Now we have a very clear detection. It’s a really a demonstration of what the telescope can do.”

No observatory has ever measured such subtle differences in brightness of so many individual colors across the 3 to 5.5-micron range in an exoplanet transmission spectrum before. Access to this part of the spectrum is crucial for measuring abundances of gases like water and methane, as well as carbon dioxide, which are thought to exist in many different types of exoplanets.

Understanding the composition of a planet’s atmosphere is important because it tells researchers something about the origin of the planet and how it evolved.

“Detecting what the atmosphere is made of tells you a lot about the chemistry of that planet,” Harrington says. “When you’re learning about the balance of the chemicals in the atmosphere, it has implications for life. The amounts of carbon versus oxygen are pretty key items, because we’re made of carbon and oxygen. The goal of all of exoplanet science really is to characterize Earth-like planets and potentially find life.”

Harrington’s role in the study included developing the proposal and editing the manuscript. He and his students have developed open-source analysis tools that will be used later in the project. The team of co-authors included more than 130 investigators from 15 countries.

One of the co-authors, Kevin Stevenson, a staff astronomer at Johns Hopkins Applied Physics Laboratory in Maryland, is co-principal investigator of the project and has been involved with it since its inception.

Stevenson received his Ph.D. in physics and planetary sciences from UCF in 2012 and was advised by Harrington.

He said his work at UCF using the Spitzer Space Telescope to study the atmospheres of several hot-Jupiter exoplanets at mid-infrared wavelengths, the same wavelengths covered by the JWST, gave him a deeper appreciation for the quality and precision of its data.

He says the team is preparing four more papers that they hope to publish soon.

“We’ll be looking to identify the mysterious molecule near 4 microns, searching for sodium and potassium at short wavelengths, and constraining the presence of other molecules, such as water vapor, methane and carbon monoxide,” he says. “Each of these four papers will present data from the same planet, WASP-39 b, but using different instrument modes. This enables us to study the atmosphere of the same planet over a range of wavelengths and spectral resolutions.”

The NIRSpec prism observation of WASP-39 b is just one part of a larger investigation that is observing this planet and two others using multiple instruments. The investigation, which is part of the Early Release Science program, was designed to provide the exoplanet research community with robust JWST data as soon as possible.

“The goal is to analyze the Early Release Science observations quickly and develop open-source tools for the science community to use,” says Vivien Parmentier from Oxford University. “This enables contributions from all over the world and ensures that the best possible science will come out of the coming decades of observations.”

JWST is the world’s premier space science observatory. It will solve mysteries in our solar system, look beyond to distant worlds around other stars, and probe the mysterious structures and origins of our universe and people’s place in it. JWST is an international program led by NASA with its partners, ESA (European Space Agency) and the Canadian Space Agency.

Harrington received his doctoral degree in planetary science from the Massachusetts Institute of Technology. He joined UCF’s Department of Physics, part of the College of Sciences, in 2006. He began observing and modeling giant planets as an undergraduate at MIT. His pre-impact model of the collision of comet Shoemaker-Levy 9 with Jupiter in 1994, part of his MIT Ph.D. thesis in planetary sciences, was published on the cover of Nature and sparked the worldwide media spree surrounding that event. Harrington then held a National Research Council Fellowship at the NASA Goddard Space Flight Center, during which he modeled the aftermath of the Shoemaker-Levy 9 impact and also identified the majority of planetary waves known on planets other than Earth. From 1997-2006, he worked as a staff scientist at Cornell University, where his interests shifted to observing extrasolar planets. He was part of the team that first measured light from an extrasolar planet, a result published in Nature in April 2005. He continues his exoplanet work at UCF. In 2020, he was named a UCF Pegasus Professor. He served as chair of the UCF Faculty Senate and on the UCF Board of Trustees in 2020-2022.

Study title: Identification of carbon dioxide in an exoplanet atmosphere