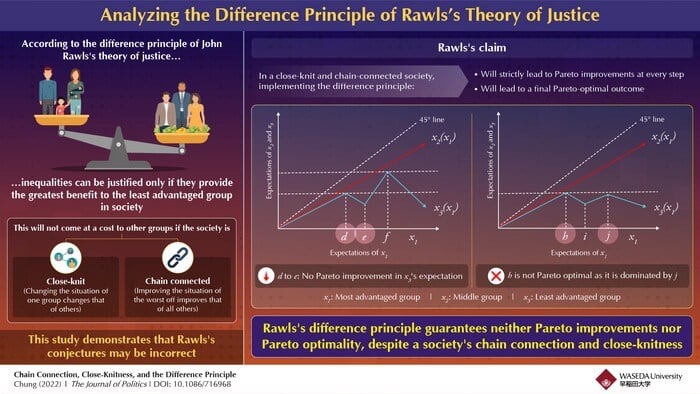 Study on social justice in chain-connected and close-knit societies finds that helping the least advantaged section of society may not necessarily benefit everyone.

John Rawls, one of the 20th century’s most notable political philosophers, proposed a theory of distributive justice known as justice as fairness.

According to his theory, once a society successfully guarantees equal basic rights and liberties for everybody, the next step should be to properly regulate any ensuing social and economic inequalities. One of the principles he proposed to do this was the difference principle. Rawls’s difference principle states that inequalities can be justified only if they provide the greatest benefit to the least advantaged group in society. Rawls argued that if a society is chain connected (meaning that the betterment of the least advantaged group leads to the betterment of all other groups in society) and close-knit (i.e., changes in the condition of one group necessarily changes that of all others), the concern that benefiting the least advantaged may not lead to improving society as a whole is nullified, because benefiting one group would, by default, benefit others. In this process, societies could eventually reach an optimal state.

However, in this article, which was published online on July 26, 2022 and is to appear in Volume 84, Issue 4 of the Journal of Politics in October 2022, Associate Professor Hun Chung of Waseda University argues that Rawls’ conjectures are incorrect. “Political philosophy serves as the foundation for a society’s basic political and economic institutions, and can have a profound impact on people’s lives,” Chung explains. The purpose of his study is to make policymakers aware of the possible gaps in such well-established theories.

In sum, Chung has shown that improvements in the situation of the least favored group does not necessarily entail betterment of all groups at every stage, or even a Pareto optimal state even when society is chain connected and close-knit. Chung’s analysis provides enough scope to reconsider the implementation of the difference principle while making policies on a just and fair society. “My research can make policy designers become self-aware of the potential and unintended (negative) effects of certain policies that aim to improve the situation of a specific targeted social group,” Chung concludes.

Chung’s reassessment of Rawls’s theory of distributive justice goes to show that while the heart is in the right place, the head needs to be as well; more consideration might be needed when using theory for policy implementation to improve the quality of life for all social groups.