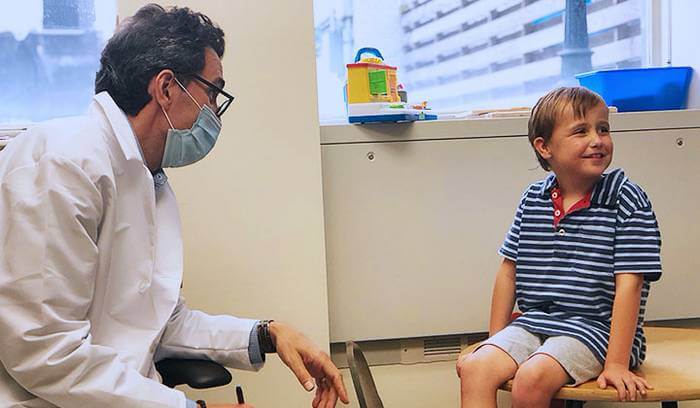 Dr. Alexander Kolevzon, Clinical Director of the Seaver Autism Center for Research and Treatment at Mount Sinai with trial participant.

Results of a small, but unique research study, led by researchers from the Seaver Autism Center for Research and Treatment at Mount Sinai and published online in Human Genetics and Genomic Advances, suggest that low-dose ketamine is generally safe, well-tolerated and effective to treat clinical symptoms in children diagnosed with ADNP syndrome (also known as Helsmoortel-VanDerAa syndrome), a rare neurodevelopmental disorder caused by mutations in the activity dependent neuroprotective protein (ADNP) gene.

The ADNP gene affects brain formation, development, and function, and the protein produced from it helps control the expression of other genes. ADNP mutations are one of the most common single-gene causes of autism. Ketamine was approved in the United States in 1970 and is used for anesthesia and pain management, and more recently as a treatment for depression. Studies in animal models suggest that low-dose ketamine may be neuroprotective and increase expression of the ADNP gene.

“We were intrigued by the preclinical evidence suggesting that low-dose ketamine may increase levels of the  ADNP protein and compensate for its loss in ADNP syndrome, so we designed this study to evaluate the safety, tolerability, and behavioral outcomes of low-dose ketamine in children with the syndrome,” says Alexander Kolevzon, MD, Clinical Director of the Seaver Autism Center. “We also sought to explore the feasibility of using electrophysiological biomarkers and computerized eye-tracking to assess sensitivity to treatment.”

In order to evaluate the effect of ketamine, the Mount Sinai research team used a single-dose (0.5mg/kg), open-label design, with ketamine infused intravenously over 40 minutes. Ten children with ADNP syndrome, ages six to 12 years, were enrolled. They found ketamine was generally well-tolerated, and there were no serious adverse events. The most common adverse events were elation/silliness (50 percent), fatigue (40 percent), and increased aggression (40 percent). Using parent-report instruments to assess treatment effects, ketamine was associated with improvements in a wide array of domains, including social behavior, attention deficit and hyperactivity, restricted and repetitive behaviors, and sensory sensitivities, a week after administration.

Results from the clinician-rated assessments indicated improvement based on the Clinical Global Impression-Improvement scale, a seven-point scale commonly used by clinicians to assess how much a patient’s illness has improved or worsened relative to a baseline state at the beginning of an intervention. Importantly, results across clinician-rated and caregiver-rated assessments were largely consistent. The results also highlight the potential of assessing early changes in social attention with computerized eye-tracking and the electrophysiological measurement of a listening task known as auditory steady-state response.

“We are encouraged by these findings, which provide preliminary support for ketamine to help reduce negative effects of this devastating syndrome,” Dr. Kolevzon says. “Future studies using a placebo-controlled design and studying the effects of repeated dosing over a longer duration of time and in a larger cohort of participants are needed before ketamine is used clinically, but our study is a promising first step in that process.”

Ongoing studies are using RNA sequencing to measure change in ADNP expression and other genes, as well as DNA methylation analysis, which has been previously described as relevant in ADNP syndrome. DNA methylation regulates and silences the expression of genes and is vital for embryonic development. Increased occurrence of rare and extreme DNA methylation levels have been linked with neurodevelopmental disorders and congenital anomalies.

About the Seaver Autism Center for Research and Treatment at Mount Sinai
The Seaver Autism Center conducts progressive research studies to enhance the diagnosis of autism and related disorders, discover the biological causes of those disorders, and develop and disseminate breakthrough treatments. With a vision to be the international leaders for precision medicine in autism, the Center bridges the gap between new discoveries in basic science and enhanced care. The Center offers assessment and behavioral health services and care to children and families, as well as educational and community outreach programs. Founded in 1993 and located at the Icahn School of Medicine at Mount Sinai, families come from around the world to seek our services and the expert counsel of our team of scientists, researchers and clinicians.