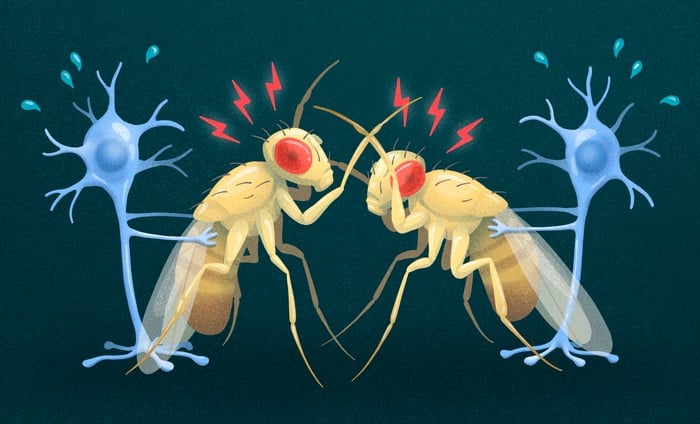 Salk scientists discovered a gene and group of cells that prevent escalated aggression in the brains of fruit flies.

The brain mechanisms that cause aggressive behavior have been well studied. Far less understood are the processes that tell the body when it’s time to stop fighting. Now, a new study by Salk scientists identifies a gene and a group of cells in the brain that play a critical role in suppressing aggression in fruit flies.

The findings, published in Science Advances on September 7, 2022, have implications for disorders such as Parkinson’s disease, which can sometimes cause behavioral changes like increased aggression and combativeness.

“We’ve found an important mechanism in the brain that normally prevents us from expressing high levels of aggression,” says senior author Kenta Asahina, assistant professor in Salk’s Molecular Neurobiology Laboratory. “Although our findings are in fruit flies, the same mechanism may be at play in humans, at least at the molecular level, which could help better explain a host of psychiatric diseases.”

De-escalation, or the ability to decide when it’s time to stop fighting, is a vital behavior for survival because it allows animals to adjust their aggressiveness according to the costs and benefits of an encounter with a rival—at a certain point, continuing to fight is no longer worth it. Sensing when it’s time to de-escalate is complex because there isn’t an obvious trigger, such as the way fullness triggers an animal to stop eating.

For the study, scientists compared the behavior of normal fruit flies (Drosophilia) and fruit flies lacking various genes of interest. Specifically, they examined how frequently male flies lunged at other males, a typical aggressive behavior in this species. They found that flies missing a gene called nervy were significantly more aggressive than their normal counterparts.

The nervy gene isn’t actually involved in the animal’s moment-to-moment decision to stop fighting. Rather, it helps give the fly the ability to respond to environmental cues (likely the fly’s past experience with other individuals), the researchers say.

“The function of nervy is to set up the nervous system in such a way that animals are ready to stop fighting when the right signal comes in,” says first author Kenichi Ishii, a former postdoctoral fellow in Asahina’s lab.

The flies that lacked nervy weren’t initiating more aggressive interactions by chasing other flies. They were simply more likely to choose to fight over the course of a normal encounter.

Researchers then used single-cell sequencing to look at how other genes were activated differently in flies that were missing the nervy gene, compared to normal flies. This allowed the team to identify other genes downstream from nervy that were involved in developing the de-escalation mechanism.

“Although flies are very different animals than humans, some of these mechanisms may be similar in both species. Uncovering the molecular basis of aggression may lead to a better understanding of how aggression is involved in certain types of psychiatric disorders,” says Asahina.

Although the authors also identified a small group of cells in the brain (neurons) that de-escalate fighting by using the nervy gene, more work is necessary to understand the brain circuit that stops fighting. For the next step, the researchers hope to precisely identify the group of neurons responsible for suppressing aggressive behavior. They also want to figure out at what stage of development the nervy gene is important for shaping the nervous system.

Other authors include Matteo Cortese and Maxim N. Shokhirev of Salk; and Xubo Leng of Washington University in St. Louis.

Major funders include the National Institutes of Health (R35GM119844), the Naito Foundation Grant for Studying Overseas, and the JSPS Postdoctoral Fellowship for Research Abroad.

About the Salk Institute for Biological Studies:

Every cure has a starting point. The Salk Institute embodies Jonas Salk’s mission to dare to make dreams into reality. Its internationally renowned and award-winning scientists explore the very foundations of life, seeking new understandings in neuroscience, genetics, immunology, plant biology and more. The Institute is an independent nonprofit organization and architectural landmark: small by choice, intimate by nature and fearless in the face of any challenge. Be it cancer or Alzheimer’s, aging or diabetes, Salk is where cures begin. Learn more at: salk.edu.