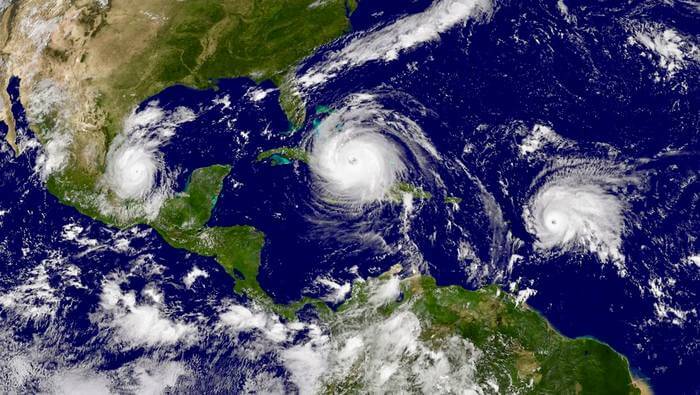 A satellite image from the National Oceanic and Atmospheric Administration captures an active hurricane season which included Hurricanes Katia and Irma and Tropical Storm Jose (from left to right) on September 8, 2017

A new study found that even if we did have the infinite power to artificially cool enough of the oceans to weaken a hurricane, the benefits would be minimal. The study led by scientists at the University of Miami (UM) Rosenstiel School of Marine, Atmospheric and Earth Science showed that the energy alone that is needed to use intervention technology to weaken a hurricane before landfall makes it a highly inefficient solution to mitigate disasters.

“The main result from our study is that massive amounts of artificially cooled water would be needed for only a modest weakening in hurricane intensity before landfall,” said the study’s lead author James Hlywiak, a graduate of the UM Rosenstiel School. “Plus, weakening the intensity by marginal amounts doesn’t necessarily mean that the likelihood for inland damages and safety risks would decrease as well. While any amount of weakening before landfall is a good thing, for these reasons it makes more sense to direct focus towards adaptation strategies such as reinforcing infrastructure, improving the efficiency of evacuation procedures, and advancing the science around detection and prediction of impending storms.”

To scientifically answer questions about the effectiveness of artificially cooling the ocean to weaken hurricanes, the authors used a combination of air-sea interaction theories and a highly sophisticated computer model of the atmosphere.

In their computer simulations, they cooled areas of the ocean up to 260,000 km2 in size – larger than the state of Oregon and equating to 21,000 cubic kilometers of water – by up to 2 degrees Celsius. Even with the largest area of cooling, the simulated hurricanes weakened by only 15 percent. The amount of energy extracted from the ocean to achieve this small reduction is equivalent to more than 100 times the amount consumed across the entire United States in 2019 alone.

“You might think that the main finding of our article, that it’s pointless to try to weaken hurricanes, should be obvious,”said David Nolan, a professor of atmospheric sciences at the UM Rosenstiel School and senior author of the study. “And yet, various ideas for hurricane modification appear often in popular media and are even submitted for patents every few years. We’re happy to be able to put something into the peer-reviewed literature that actually addresses this.”

The study, titled “Targeted Ocean Cooling to Weaken Tropical Cyclones Would Be Futile,” was published in the journal Nature Communications Earth & Environment. The study was supported by a University of Miami Graduate Fellowship and National Science Foundation PREEVENTS grant (Award # 1663947).