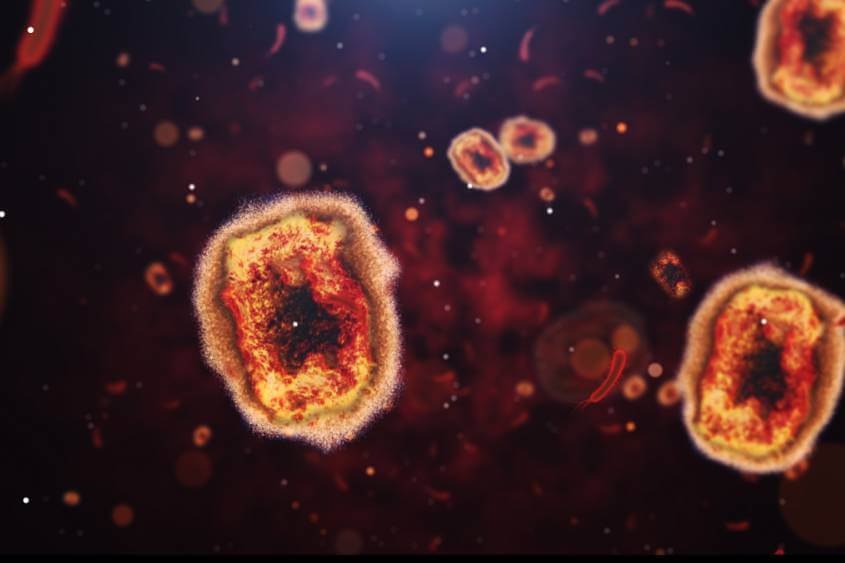 While monkeypox has been circulating in Africa for many years, the recent outbreak across the globe has exposed considerable uncertainties about the virus’ transmission.

Individuals infected with the monkeypox virus usually heal from the disease on their own without medical treatment, yet the questions raised reinforce the need for research to understand how the virus spreads and causes disease, which is critical to the development of new vaccines and therapeutics.

Suresh Kuchipudi, Huck Chair in Emerging Infectious Diseases at Penn State, and his colleagues, including nine members of his lab, hope to answer these questions and others in a new study to identify the potential for reverse zoonoses — when viruses circulating in humans spill over to animals — with monkeypox. In addition, the team will study the virus’ pathogenesis — or disease development — in both animal and human cells in vitro (in a test tube), as well as potential targets for therapeutics to treat the monkeypox disease. These areas have also been identified as U.S. monkeypox research priorities by the White House.

“Domestic animals like cattle are susceptible to other pox viruses, but their susceptibility to monkeypox and their role in the virus’ spread is unclear. Therefore, we plan to take a first step toward understanding monkeypox’s ability to replicate in the respiratory cells of cattle and pigs in a controlled in vitro [in a test tube] environment and use computer models to predict susceptibility, said Kuchipudi, noting that the research will not be conducted in vivo and no animals will be used in this research. “If we find that the virus can replicate in the cells of livestock, that suggests the potential for the virus to spill over into these animals and become endemic in the U.S.”

As the interim director of Penn State’s Animal Diagnostic Laboratory, Kuchipudi already has extensive experience studying zoonotic diseases — or diseases that can transmit between species — including other pox diseases, such as goat pox and sheep pox, and more recently COVID-19 in livestock and wildlife, including white-tailed deer.

According to Kuchipudi, while much less transmissible than SARS-CoV-2, monkeypox is known to transmit between animals via close contact with skin lesions or bodily fluids. Among humans, although not fully known, there is the possibility that the virus may also transmit via respiratory droplets, potentially playing a critical role in secondary transmission after the primary skin route. However, once the virus enters the body, its pathogenesis is not well understood.

“Most of the research on monkeypox is decades old,” said Kuchipudi. “Our goal is to fill this gap by investigating the pathogenesis of monkeypox in human cells and identifying targets for therapeutic development. We’re currently aware of two different strains of the virus that have been detected in the U.S., and our work will use the less virulent strain, which is that from Western Africa.”

According to the CDC, although vaccines are available, currently there is no specific treatment approved for monkeypox virus infections; however, antivirals developed for use in patients with smallpox may prove beneficial. In collaboration with Marco Archetti, associate professor of biology, the researchers will explore a novel, post-infection therapeutic — a synthetic defective interfering (DI) particle-based therapy for monkeypox. Archetti previously designed and demonstrated the effectiveness of a synthetic DI therapy for COVID-19.

Lora Weiss, senior vice president for research, Penn State, noted that the COVID-19 pandemic has highlighted the need to expand our study and understanding of zoonotic diseases.

“For a variety of reasons, we are becoming more aware of zoonotic diseases in the U.S., and our researchers are at the forefront of studying these diseases to better understand emerging pathogens with the potential to harm human health,” she said. “We believe that scientific research like this will not only inform public health, but is also critical to advancing scientific knowledge, enabling us to develop treatments in advance of disease emergence.”

This research will be performed at the Eva J. Pell BSL-3 Enhanced Laboratory for Advanced Biological Research, a secure bio-containment facility built and operated under criteria mandated by the National Institutes of Health, the U.S. Department of Agriculture and the U.S. Centers for Disease Control, that was built to enable Penn State scientists to conduct research on infectious diseases and pathogens. The researchers have obtained the necessary regulatory approvals and are following all safety protocols and procedures required by the federal government and the University to conduct this type of research. All members of the team are fully trained and have received proper approvals to work with infectious disease agents.