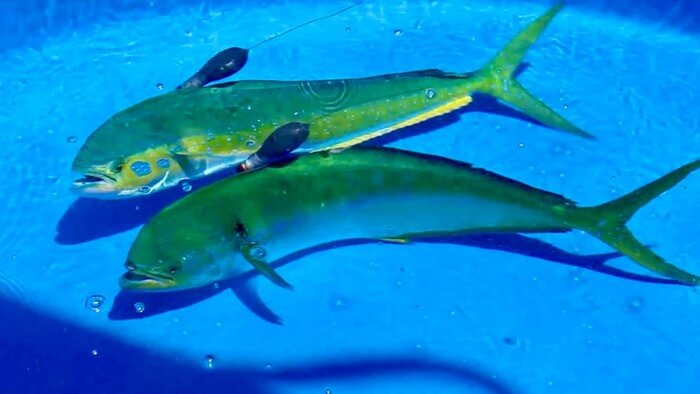 A first-of-its-kind research experiment led by researchers at University of Miami (UM) Rosenstiel School of Marine, Atmospheric, and Earth Science confirmed that a popular sport fish exposed to sublethal levels of crude oil and released back into the wild exhibits altered behavior, decreased survival, and reduced spawning.

The findings suggest that during the Deepwater Horizon oil spill, mahi-mahi in the Northern Gulf of Mexico and the Atlantic Ocean exposed to crude oil, experienced behavioral impairment such as decreased survival and spawning frequency.

To conduct the experiment, the researchers caught wild mahi-mahi in the Gulf of Mexico, fitted them with satellite tags programmed to collect temperature, depth, acceleration, and location information, and exposed them to either oil or control conditions in experimental tanks on the F.G. Walton Smith research vessel before releasing them back into the Gulf of Mexico. They also collected a fin clip for gene expression analyses prior to release.

Analysis of data from satellite tags revealed altered temperature and depth distributions in oil-exposed fish that result in increased predation rates for the first 8 days fish were at liberty and decreased spawning compared to unexposed wild fish for up to 37 days. Gene expression data showed that these behavioral changes may be underlain by muscular, sensory, and central nervous signaling systems.

In the lab, exposed fish show impaired vision, olfaction and swimming performance with some evidence for both sensory system and central nervous system impairment. This research shows that behavior is affected both in lab and wild fish after oil exposure and for the wild fish it translates to higher predation mortality and reduced spawning.

“Our findings showed that sublethal observations in the laboratory are also observed in wild fish and that they translate to reduced survival and reduced reproduction,” said Lela Schlenker, lead author of the study and a graduate of the Rosenstiel School.

“Understanding the direct impacts of oil exposure on wild fish is critically important as deeper and riskier offshore oil drilling operations increase.” said Martin Grosell, professor and chair of the Department of Marine Biology and Ecology at the Rosenstiel School and co-author of the study.

This study directly demonstrates the effects of the Deepwater Horizon oil spill to wild fish in the Northern Gulf of Mexico. Prior to this study, researchers did not understand how fish in the wild exposed to a sublethal concentration of crude oil would be impacted. The researchers were able to confirm altered behavior patterns in oil-exposed fish result in increased predation rates and decreased spawning. These impacts could suggest generational impacts resulting from Deepwater Horizon and future oil spills.

Many people’s livelihood was directly impacted by this oil spill, one for which BP settled to pay 19 billion $US for environmental damages.

The research was supported by a grant from the Gulf of Mexico Research Initiative (Grant No. 530 SA-1520 to the RECOVER consortium (Relationship of effects of cardiac outcomes in fish for validation of ecological risk)