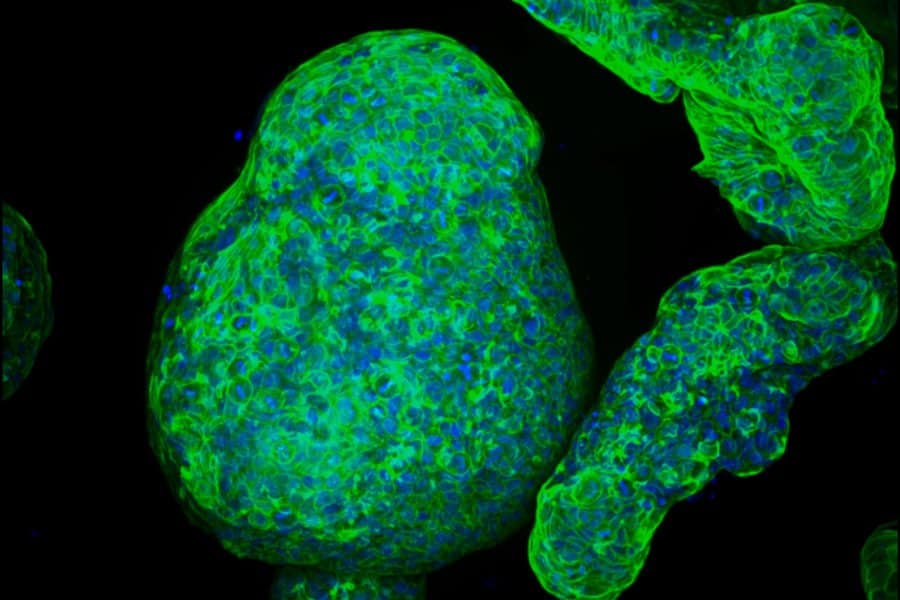 Obesity is a known risk factor for at least 13 types of cancer, in part because it creates ever-present inflammatory state. For years, one researcher has wondered if there’s more to the story than inflammation.

New research from the lab of Dr. Elda Grabocka shows a new way that obesity may drive cancer formation in pancreatic cancer, which has a five-year survival of 11% for the majority of patients. In a study published in Cancer Discovery, the researchers found that stress granules are much more abundant in obesity-related pancreatic cancer compared to non-obese patients, and importantly, blocking their formation stopped cancer growth in animals. The research reveals a new direction for developing cancer therapy.

“Stress granule research is exploding right now, but there’s still a lot we don’t know regarding what they’re made of and how they work,” says Dr. Grabocka, who is a researcher with the Sidney Kimmel Cancer Center – Jefferson Health and an assistant professor at Thomas Jefferson University. “This work is the first to show that an overload of stress granules enables the tumor-growth in the pancreas. Our experiments in mice also showed a complete reversal of cancer growth in the lab.”

Stress granules are an unusual sort of cellular compartment. The cell generates these non-membraned organelles in response to stress, and to protect the cell from stress-induced self-destruction. It’s a cellular reflex and defense mechanism that’s present throughout the animal and plant kingdoms. Even tomato plants produce stress granules to protect their cells. Researchers still don’t know what these organelles are made of, and how exactly they protect the cell. However, it’s clear that cancers have co-opted this defense mechanism to their own advantage. Many cancers produce much higher levels of stress granules than normal cells, to help protect the cancer cells from triggering a natural self-destruction sequence.

“Now,” says Dr. Grabocka, “we had to tools to answer the question about obesity.” Obesity affects two thirds of all adults in the US and 50% globally. It also doubles the risk and mortality for pancreatic cancer and increases the risk for other cancers. About 33% of pancreatic cancer is obesity-related, a number that is only expected to increase in the coming decades.

Researchers took two different types of mouse models of obesity – one genetically predisposed to overeating, and one that was fed a high-fat diet — and looked at pancreatic cancer in these mice. Both models had five to eight times the amount of stress granules in their cancers than non-obese mice. “This suggested to us that the cancers in obese mice might be dependent on stress-granules for their growth. When we take away the thing a cancer depends on to live, we kill the cancer.”

And the most striking difference was their overall survival. Normally in these models of pancreatic cancer, mice die very quickly, within 50-60 days. In obese mice whose tumor stress granules were blocked, 40% were cancer free after 300 days, with no sign of the cancer anywhere in the animals’ bodies. “This magnitude of response is extraordinarily rare,” says Dr. Grabocka.

These experiments showed that stress granules weren’t just present in cancer cells, they were actually driving the growth of cancer at the very start. “This is the first direct evidence linking stress granules to cancer progression,” says Dr. Grabocka.

Importantly, Dr. Grabocka’s lab also identified drug targets that could stop the formation of stress granules in obesity-related pancreatic cancer. The next steps are to test existing small-molecule inhibitors to see if they can be translated for use in humans.

“Conditions of cellular stress, like obesity, increase the number of stress granules present in cells, and may drive the formation of pancreatic and other cancers,” says Dr. Grabocka. “Because the effect we see is so big, we think targeting stress granule formation could make for a strong candidate for a novel cancer therapy. Our work paves the way for a clinical trial in humans.”

This study was supported by an NIH/NCI R37CA160495 grant and a V Scholar Award and grants from the German Research Foundation. The Thomas Jefferson University Flow Cytometry Core, Translational Research/Pathology Core, and Animal Core are shared facilities partially supported by the National Cancer Center Support Grant (P30 CA056036) to the Sidney Kimmel Cancer Center at Jefferson. The authors report no conflicts of interest.