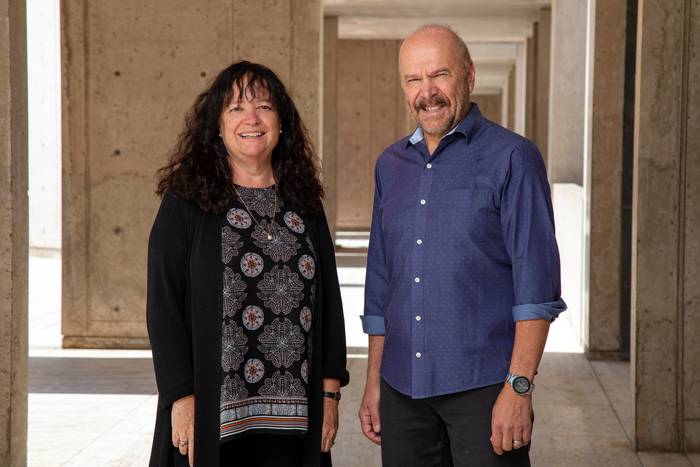 With a five-year, $126 million grant from the National Institutes of Health (NIH), a team led by Salk Institute scientists has launched a new Center for Multiomic Human Brain Cell Atlas. Part of the NIH’s Brain Research Through Advancing Innovative Neurotechnologies® (BRAIN) Initiative, the project aims to describe the cells that make up the human brain in unprecedented molecular detail, classify brain cells into more precise subtypes, and pinpoint the location of each cell in the brain. What’s more, the team will track how these features change from early to late life.

The goal is to better understand how neurotypical human brains work and age. The project will also establish a baseline against which scientists will be able to compare brains with neurological or psychiatric conditions such as Alzheimer’s disease, autism, depression and traumatic brain injury.

“The brain map we develop could help point disease researchers in the right direction—for example, we could say ‘That’s the region of the genome, in that specific subset of neurons, in that part of the brain, where a molecular event goes awry to cause that disease,’” says center leader Professor Joseph Ecker, director of the Genomic Analysis Laboratory at Salk and Howard Hughes Medical Institute investigator. “And ultimately this information might help us design gene therapies that target only the cell populations where the treatment is needed—delivering the right genes to the right place at the right time.”

Salk will be awarded approximately $77 million of the center’s funding, making it the largest single grant the Institute has received in its 62-year history.

The Center for Multiomic Human Brain Cell Atlas, part of the NIH’s new BRAIN Initiative Cell Atlas Network, builds upon a five-year effort to map the mouse brain, a project that was known as the BRAIN Initiative Cell Census Network. A special issue of Nature published in October 2021 described the results of that effort, including how different cell types are organized and connected throughout the mouse brain.

“Similar to the way we learned about space travel from short trips to the moon, the mouse brain mapping project taught us a lot about how to approach a much bigger brain and the types of genomic information we would need to be able to truly map the human brain,” Behrens says. “This project is an example of how fruitful teamwork can be in science—these types of projects cannot be accomplished in a single lab.”

In the Center for Multiomic Human Brain Cell Atlas, researchers will examine 1,500 brain samples (30 human brains ranging in age, 50 regions each). The center is concerned mostly with epigenetics—the molecular events that influence whether genes are turned “on” or “off” in a given cell type or at a particular time—rather than genetic sequences of each cell. The center will also take into account which cells live where. Location is important because cells talk to each other, Ecker says.

UC Irvine team members will primarily manage brain sample acquisition. Salk scientists will isolate each nucleus from each individual cell in each region and record molecular details such as chromatin architecture and DNA methylation (that is, the 3D structure of chromosomes and how they are modified with chemical tags.) At UC San Diego, Ren’s lab will look at chromatin modifications and gene expression.

“Essentially, we want to take millions, even hundreds of millions of brain cells, learn everything we can about their epigenetics and how their chromatin is arranged and project them in a spatial context so we can see where these cells live and understand how all of the cells in any brain region are organized, and at any age,” says Ecker, who also holds the Salk International Council Chair in Genetics.

“At the moment, we have almost no data like that for the human brain.”

Typically, when researchers study a single cell, the cell is removed from the rest of the brain, which limits the conclusions that can be drawn. To overcome this, Ecker’s team will use a newer technique called spatial transcriptomics to distinguish cells by their genetic data and use that information to map the cells back to their original locations.

Many of the other techniques the team will apply were developed by the researchers themselves. For example, Ecker’s team spent five years developing snmCATseq, a technology that simultaneously analyzes the DNA, RNA and open chromatin from a single cell.

Ecker estimates that his lab alone will generate 11 petabytes of raw data during the project—the equivalent of 171,875 thumb drives (64GB each)—underscoring the center’s expertise and resources in computational biology, data storage and analysis. Washington University team members will be responsible for data management and integration.

“With the announcement of the BICAN awards, we are making an exciting transition in the overall BRAIN Initiative cell census program, which began in 2014,” said John Ngai, director of the NIH BRAIN Initiative. “These awards will enable researchers to explore the multifaceted characteristics of the more than 200 billion neurons and non-neuronal cells in the human brain at unprecedented detail and scale—a feat in advanced technologies and cross-team research collaboration that will reveal new paradigms for understanding how pathological changes in particular groups of brain cells could cause neurologic and neuropsychiatric disorders.”

About the NIH BRAIN Initiative:

The NIH Brain Research through Advancing Innovative Neurotechnologies (BRAIN) Initiative is a large-scale effort that seeks to deepen understanding of the inner workings of the human mind and to improve how we treat, prevent and cure disorders of the brain. Since its initial funding in 2014, the BRAIN Initiative has awarded more than $2.4 billion in research awards. The BRAIN Cell Census Network (mouse brain map) and BRAIN Cell Atlas Network (human brain map) are subsets of the BRAIN Initiative.

About the Salk Institute for Biological Studies:

Every cure has a starting point. The Salk Institute embodies Jonas Salk’s mission to dare to make dreams into reality. Its internationally renowned and award-winning scientists explore the very foundations of life, seeking new understandings in neuroscience, genetics, immunology, plant biology and more. The Institute is an independent nonprofit organization and architectural landmark: small by choice, intimate by nature and fearless in the face of any challenge. Be it cancer or Alzheimer’s, aging or diabetes, Salk is where cures begin. Learn more at: salk.edu.