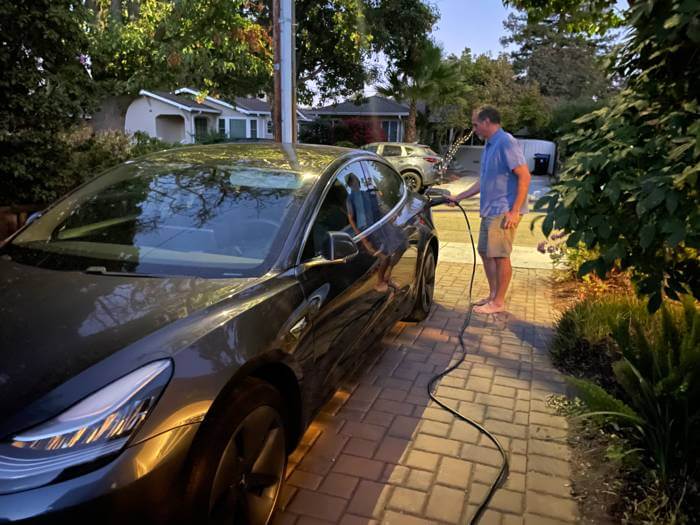 If the common charging of electric vehicles at home in the evening or overnight shifts to daytime at work as more cars go electric, then that would restrain extra costs for electricity systems, according to a new Stanford University study.

The vast majority of electric vehicle owners charge their cars at home in the evening or overnight. We’re doing it wrong, according to a new Stanford study.

In March, the research team published a paper on a model they created for charging demand that can be applied to an array of populations and other factors. In the new study, published Sept. 22 in Nature Energy, they applied their model to the whole of the western United States and examined the stress the region’s electric grid will come under by 2035 from growing EV ownership. In a little over a decade, they found, rapid EV growth alone could increase peak electricity demand by up to 25 percent, assuming a continued dominance of residential, nighttime charging.

To limit the high costs of all that new capacity for generating and storing electricity, the researchers say, drivers should move to daytime charging at work or public charging stations, which would also reduce greenhouse gas emissions. This finding has policy and investment implications for the region and its utilities, especially since California moved in late August to ban sales of gasoline powered cars and light trucks starting in 2035.

“We encourage policymakers to consider utility rates that encourage day charging and incentivize investment in charging infrastructure to shift drivers from home to work for charging,” said the study’s co-senior author, Ram Rajagopal, an associate professor of civil and environmental engineering at Stanford.

In February, cumulative sales of EVs in California reached 1 million, accounting for about six percent of cars and light trucks. The state has targeted 5 million EVs on the road by 2030. When the penetration hits 30 percent to 40 percent of cars on the road, the grid will experience significant stress without major investments and changes in charging habits, said Rajagopal. Building that infrastructure requires significant lead time and cannot be done overnight.

“We considered the entire western U.S. region, because California depends heavily on electricity imports from the other western states. EV charging plus all other electricity uses have consequences for the whole western region given the interconnected nature of our electric grid,” said Siobhan Powell, lead author of the March study and the new one.

“We were able to show that with less home charging and more daytime charging, the Western U.S. would need less generating capacity and storage, and it would not waste as much solar and wind power,” said Powell, mechanical engineering PhD ’22.

“And, it’s not just California and western states. All states may need to rethink electricity pricing structures as their EV charging needs increase and their grid changes,” added Powell, who recently took a postdoctoral research position at ETH Zurich.

Once 50 percent of cars on the road are powered by electricity in the western U.S. – of which about half the population lives in California – more than 5.4 gigawatts of energy storage would be needed if charging habits follow their current course. That’s the capacity equivalent of 5 large nuclear power reactors. A big shift to charging at work instead of home would reduce the storage needed for EVs to 4.2 gigawatts.

Current time-of-use rates encourage consumers to switch electricity use to nighttime whenever possible, like running the dishwasher and charging EVs. This rate structure reflects the time before significant solar and wind power supplies, when demand threatened to exceed supply during the day, especially late afternoons in the summer.

Today, California has excess electricity during late mornings and early afternoons, thanks mainly to its solar capacity. If most EVs were to charge during these times, then the cheap power would be used instead of wasted. Alternatively, if most EVs continue to charge at night, then the state will need to build more generators – likely powered by natural gas – or expensive energy storage on a large scale. Electricity going first to a huge battery and then to an EV battery loses power from the extra stop.

At the local level, if a third of homes in a neighborhood have EVs and most of the owners continue to set charging to start at 11 p.m. or whenever electricity rates drop, the local grid could become unstable.

“The findings from this paper have two profound implications: the first is that the price signals are not aligned with what would be best for the grid – and for ratepayers. The second is that it calls for considering investments in a charging infrastructure for where people work,” said Ines Azevedo, the new paper’s other co-senior author and associate professor of energy science and engineering in the Stanford Doerr School of Sustainability, which opened on Sept. 1.

“We need to  move quickly toward decarbonizing the transportation sector, which accounts for the bulk of emissions in California,” Azevedo continued. “This work provides insight on how to get there. Let’s ensure that we pursue policies and investment strategies that allow us to do so in a way that is sustainable.”

Another issue with electricity pricing design is charging commercial and industrial customers big fees based on their peak electricity use. This can disincentivize employers from installing chargers, especially once half or more of their employees have EVs. The research team compared several scenarios of charging infrastructure availability, along with several different residential time-of-use rates and commercial demand charges. Some rate changes made the situation at the grid level worse, while others improved it. Nevertheless, a scenario of having charging infrastructure that encourages more daytime charging and less home charging provided the biggest benefits, the study found.

This work was funded by the California Energy Commission, by the National Science Foundation, and by the Bits & Watts Initiative with support from Volkswagen.