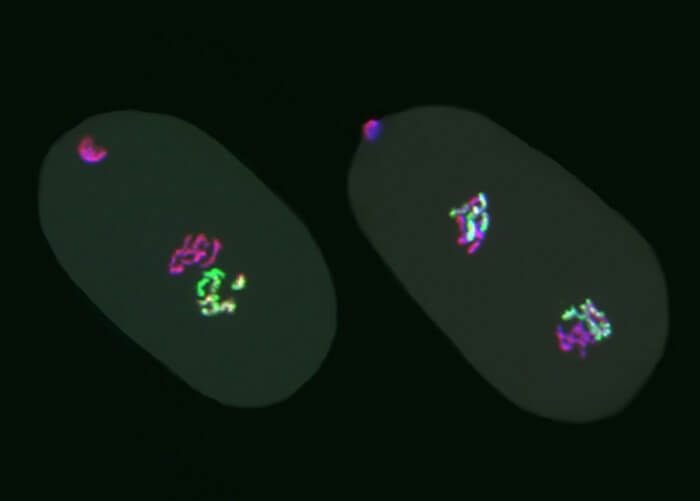 Without altering the genetic code in the DNA, epigenetic modifications can change how genes are expressed, affecting an organism’s health and development. The once radical idea that such changes in gene expression can be inherited now has a growing body of evidence behind it, but the mechanisms involved remain poorly understood.

A new study by researchers at UC Santa Cruz shows how a common type of epigenetic modification can be transmitted via sperm not only from parents to offspring, but to the next generation (“grandoffspring”) as well. This is called “transgenerational epigenetic inheritance,” and it may explain how a person’s health and development could be influenced by the experiences of his or her parents and grandparents.

The study, published the week of September 26 in the Proceedings of the National Academy of Sciences (PNAS), focused on a particular modification of a histone protein that changes the way DNA is packaged in the chromosomes. This widely studied epigenetic mark (called H3K27me3) is known to turn off or “repress” the affected genes and is found in all multicellular animals—from humans to the nematode worm C. elegans used in this study.

Histones are the main proteins involved in the packaging of DNA in the chromosomes. The epigenetic mark known as H3K27me3 refers to methylation of a particular amino acid in the histone H3. This leads to the DNA being more densely packaged, making the genes in that region less accessible for activation.

The new study involved selectively stripping this histone mark from the chromosomes of C. elegans sperm, which were then used to fertilize eggs with fully marked chromosomes. In the resulting offspring, the researchers observed abnormal gene expression patterns, with genes on the paternal chromosomes (inherited from the sperm) turned on or “upregulated” in the absence of the repressive epigenetic mark.

“In all the tissues we analyzed, genes were aberrantly expressed, but different genes were turned up in different tissues, demonstrating that the tissue context determined which genes were upregulated,” Strome said.

Analysis of the chromosomes in the offspring’s germline tissue revealed that the upregulated genes still lacked the repressive histone mark, while the mark had been restored on the genes that were not upregulated.

“In the germline of the offspring, some genes were aberrantly turned on and stayed in the state lacking the repressive mark, while the rest of the genome regained the mark, and that pattern was passed on to the grandoffspring,” Strome explained. “We speculate that if this pattern of DNA packaging is maintained in the germline, it could potentially be passed on for numerous generations.”

In the grandoffspring, the researchers observed a range of developmental effects, including some worms that were completely sterile. This mix of outcomes is due to how chromosomes get distributed during the cell divisions that produce sperm and eggs, resulting in many different combinations of chromosomes that can be passed on to the next generation.

Researchers in Strome’s lab have been studying epigenetic inheritance in C. elegans for years, and she said this paper represents the culmination of their work in this area. She noted that other researchers studying mammalian cells in culture have reported results very similar to her lab’s findings in worms, although those studies did not show transmission across multiple generations.

“This looks like a conserved feature of gene expression and development in animals, not just a weird worm-specific phenomenon,” she said. “We can do amazing genetic experiments in C. elegans that can’t be done in humans, and the results of our experiments in worms can have broad implications in other organisms.”

The co-first authors of the paper are Kiyomi Kaneshiro, who worked on the study as a graduate student in Strome’s lab and is currently a postdoctoral researcher at the Buck Institute for Research on Aging, and UCSC research associate Thea Egelhofer. The coauthors also include bioinformaticist Andreas Rechtsteiner and graduate student Chad Cockrum (now at IDEXX Laboratories). This work was supported by the National Institutes of Health.