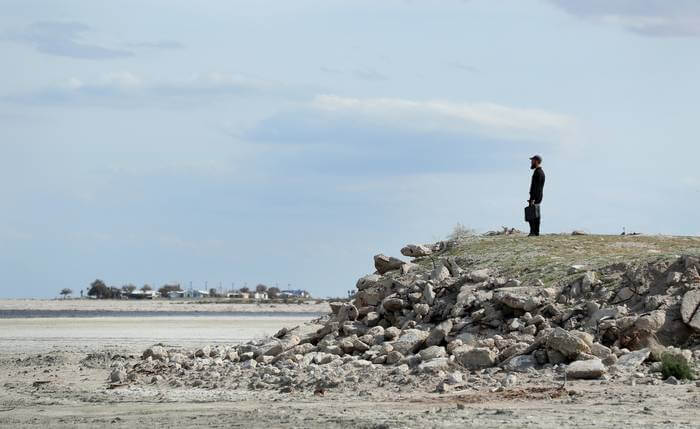 The Salton Sea as photographed from the Salton City Yacht Club.

The Salton Sea, California’s most polluted inland lake, has lost a third of its water in the last 25 years. New research has determined a decline in Colorado River flow is the reason for that shrinking.

As the lake dries up, the concentration of salt and chemicals in the remaining water has increased dramatically, causing a mass die-off of fish and birds, including endangered species. The dry lakebed, coated in the salty, toxic water, becomes dust that causes respiratory problems for nearby residents.

“It is an environmental catastrophe,” said Juan S. Acero Triana, UCR hydrologist and lead author of a new study focused on understanding water movement on and below Earth’s surface near the Salton Sea, a research field called hydrology. The study was funded by the National Science Foundation’s Innovation at the Nexus of Food, Energy and Water Systems, or INFEWS, program.

There have been a variety of hypotheses about why the water levels are steadily declining. Some blame climate change and heat for drying up the lake. Others suspect that agriculture could be to blame. As irrigation systems get more efficient and crops are modified to use less water, it means less water getting into the Salton Sea. However, the researchers say these are not the biggest causes of the sea’s decline.

“There is less water coming from the Colorado River into the Sea, and that is driving the problem,” said Hoori Ajami, UCR hydrologist, study co-author and principal investigator. This finding, and the methods used to obtain it, are now published in the journal Water Resources Research.

The researchers considered all major processes impacting the water balance of an endorheic lake like the Salton Sea, where water flows in but not out to any tributaries. Endorheic lakes worldwide have been shrinking in recent decades at what the researchers call an “alarming” rate due to the combined effects of global warming and diversion of water for agricultural and industrial purposes.

To understand the reasons for the Salton Sea’s decline, the researchers used a hydrologic model that accounted for all processes in the surrounding areas that impact the lake’s water balance, including climate, soil types, land slope, and plant growth.

Geographically the model included data not only about the Sea itself, but also from the surrounding watershed, streams entering the lake, and the land area that drains into those streams.

Data for the model was hard to come by as this is a transboundary basin on the US-Mexico border between California and Baja California Norte, and stakeholders may have been reluctant to share data that could alter previously earned water rights. However, using publicly available data and data mining techniques, UCR researchers were able to simulate long-term water balance dynamics and identify reduced Colorado River flows as the main cause of the Salton Sea shrinking.

“It’s not entirely clear, however, whether the decline in Colorado River water is more due to global warming drying out the river, or reductions in allocation levels to California, or both,” Acero Triana said.

Despite that lingering ambiguity, the researchers say the study should send a message to water management agencies and lawmakers that the Salton Sea watershed should be considered part of the Colorado River basin.

“Usually, the Sea is considered an independent system, and a watershed-centric approach considering surface and groundwater resources is needed to find a solution,” Ajami said. “As the environmental risks of a shrinking Sea mount, all parties must work together to mitigate the danger.”