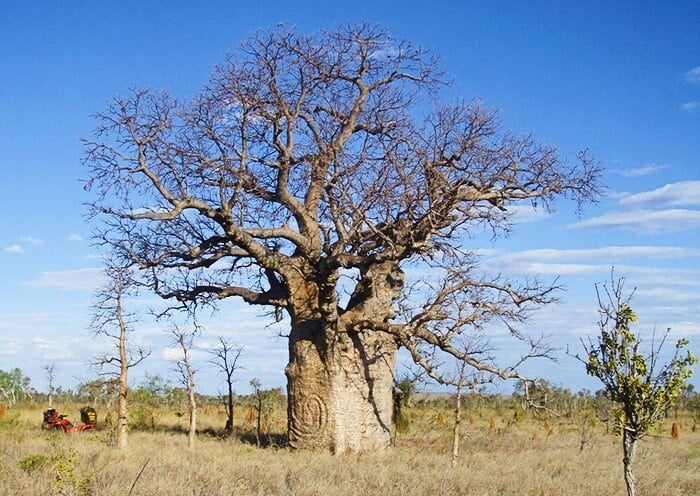 Researchers are working with a group of First Nations Australians in a race against time, and some of the roughest terrain on Earth, to document ancient art in the bark of Australia’s boab trees.

Carvings in the boab trees tell the stories of the King Brown Snake (or Lingka) Dreaming in a remote area of the Tanami desert, which straddles the border of Western Australia and the Northern Territory.

After more than two years of fieldwork, the research team from The Australian National University (ANU), The University of Western Australia and University of Canberra, working alongside five Traditional Owners, found 12 trees with carvings.

Researcher Professor Sue O’Connor, from the ANU School of Culture, History and Language, said many of the carved trees are already several hundreds of years old and there is some urgency to produce high-quality recordings before these remarkable heritage trees die.

“Unlike most Australian trees, the inner wood of boabs is soft and fibrous and when the trees dies, they just collapse,” Professor O’Connor said.

“Sadly, after lasting centuries if not millennia, this incredible artwork, which is equally as significant as the rock art Indigenous Australians are famous for, is now in danger of being lost.

Traditional Owner Brenda Garstone said it’s important Indigenous knowledge and stories are not lost and continue to be shared for generations.

“We are in a race against time to document this invaluable cultural heritage,” she said.

“They are often said to live for up to 2,000 years but this is based on the ages obtained from some of the massive baobab trees in South Africa which are a different species,” she said. “We simply don’t know how old the Australian boabs are.

“It is vital we obtain some direct ages for these remarkable Australian trees, which help tell the story of First Nations Australians and are the source of a rich cultural heritage.

“There are hundreds more boabs visible on Google Earth, which we didn’t manage to get to on this trip. They remain to be checked for carvings on our next Tanami adventure.

“We hope that our research will bring the art in the bark of these remarkable trees to many more Australians so that they can be appreciated for generations to come.”

A research paper on their fieldwork and study of Australian boab trees has been published by Antiquity.