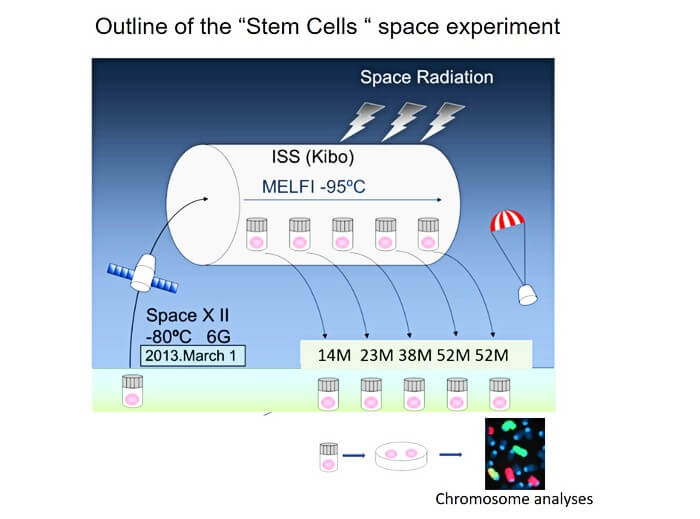 Frozen mouse embryonic stem cells were launched from the ground to the International Space Station, stored for a long period of time, recovered on the ground, and examined for chromosome aberrations.

An international team of researchers has conducted a long-term experiment aboard the International Space Station to test the effect of space radiation on mouse embryonic stem cells. Their findings will contribute to helping scientists better assess the safety and risks related to space radiation for future human space flights.

The team published their findings in the journal Heliyon on August 18, 2022.

Ordinary people are now able to travel in space, and the possibility of long-term manned flights to deep space, such as to the Moon and Mars, is increasing. Yet space radiation remains a limiting factor for manned exploration. Scientists have been conducting intensive studies to measure physical doses of space radiation to better understand its effect on the human body. However, since most of the studies until now were conducted on the ground, not in space, the results suffered from uncertainties, given that space radiation consists of many kinds of particles with different energies, and astronauts are continuously irradiated with low-dose rates. The actual space environment cannot be precisely reproduced on the ground.

“Our study aims to address the shortcomings of previous ground-based experiments by performing a direct quantitative measurement of the biological effect of space radiation on the International Space Station and comparing this real biological effect with physical estimates in the ground-based experiments,” said Takashi Morita, a professor at the Graduate School of Medicine, Osaka Metropolitan University. “The findings contribute to reducing uncertainties in risk assessments of human space flights.”

The team prepared about 1,500 cryotubes containing highly radio-sensitized mouse embryonic stem cells and sent them to space. Their study was complex in its scope, with seven years of work before launch, four years of work after launch, and five years for analysis. “It was difficult to prepare the experiment and to interpret the results, but we successfully obtained quantitative results related to space radiation, meeting our original objective,” said Professor Morita.

Looking ahead, the researchers hope to take their studies a step further. “For future work, we are considering using human embryonic stem cells rather than mouse embryonic stem cells given that the human cells are much better suited for human risk assessment, and it is easier to analyze chromosome aberrations,” said Professor Morita. Future studies might also include launching individual mice or other experimental animals to analyze their chromosome aberrations in space. “Such experiments in deep space can further contribute to reducing uncertainties in risk assessments of prolonged human journeys and stays in space,” concluded Professor Morita.

JAXA, JSF, and the Ministry of Education, Culture, Sports, Science and Technology of Japan funded this research.