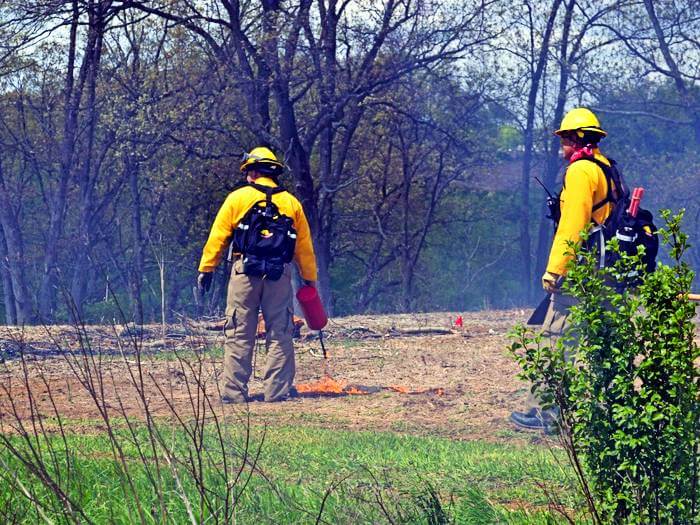 Crew members monitor a prescribed fire at the Arboretum at Penn State. In addition to its utility in managing invasive species and restoring ecosystem health, prescribed burning could help control tick populations and reduce transmission of tick-borne pathogens, researchers say.

Prescribed fire — a tool increasingly used by forest managers and landowners to combat invasive species, improve wildlife habitat and restore ecosystem health — also could play a role in reducing the abundance of ticks and the transmission of disease pathogens they carry, according to a team of scientists.

For a recently published paper, the researchers reviewed the scientific literature on the effects of fire on forest composition and structure and its influence on ticks and their wildlife hosts. They concluded that prescribed burning can help restore forest habitats to a state less favorable to several species of disease-carrying ticks and could be an effective management tactic for reducing their populations.

The era of fire suppression, which began roughly in the early 1900s and has continued for more than a century, changed the species composition of Eastern forests, creating habitats and microclimates that favored the survival and spread of ticks, noted lead author Michael Gallagher, research ecologist at the Silas Little Experimental Forest, Northern Research Station, U.S. Department of Agriculture Forest Service, New Lisbon, New Jersey.

“Before the arrival of Europeans, Eastern forests were ‘fire-dependent,’ characterized by fire-tolerant species such as pine, oak and chestnut,” Gallagher said. “Frequent low-to-moderate intensity fires would have fostered dry conditions, thinned the understory and diminished layers of leaf litter, which in turn would have created microclimates with lower humidity and higher temperatures.

“These lower-moisture, higher-temperature — or xeric — conditions were likely to limit ticks’ activity, interaction with reservoir hosts and overall populations,” he said.

Since fire has been suppressed and forests have recovered significantly from periods of deforestation caused by logging and agricultural land-clearing, fire-sensitive mesic forest species — those that thrive in and contribute to moister environments — have become dominant, a process known as mesophication, he explained.

“This mesophication of forests has been widely observed throughout the eastern United States,” Gallagher said. “In the absence of fire, these mesic habitats moderate forest temperatures and humidity, promote denser understory growth, and cause greater moisture retention in forest litter. This creates microclimates within the ideal range for tick survival and optimizes conditions for ticks to ‘quest,’ or seek hosts.”

The number of tick-borne disease cases in the United States has trended higher in recent decades, ranging to as high as nearly 60,000 annually and accounting for more than 75% of vector-borne disease cases, according to the researchers, who published their analysis in Ecological Applications. Tick-borne pathogens can cause Lyme disease, anaplasmosis, ehrlichiosis, Powassan disease, Rocky Mountain spotted fever, tularemia and other illnesses.

In addition to fire’s direct effect on tick survival by subjecting them to heat high enough to cause mortality, several indirect effects of fire-driven forest modification can suppress tick abundance and pathogen transmission, she said.

“Reductions in canopy and understory density and the creation of gap space from prescribed burning can increase sun exposure and wind speed and reduce evapotranspiration from plants, promoting hotter and drier conditions during the daytime and colder temperatures at night,” said Machtinger, who directs the college’s Veterinary Entomology Laboratory. “These more frequent moisture and temperature extremes can exceed tick tolerances and affect behavior, development time, molting and overall survival.”

She also pointed out that thinner layers of leaf litter due to burning could reduce insulation and lower the temperature of soils where ticks overwinter, causing higher mortality. In addition, studies indicate that fire-driven habitat change is likely to increase the population of certain wildlife predators of ticks, such as red imported fire ants and bobwhite quail.

“On the other hand, reduced woody plant density and debris as a result of fire actually may decrease populations of some small mammal hosts of ticks by removing cover and making them more vulnerable to predation,” Machtinger said. “This would reduce ticks’ interaction with hosts that serve as reservoirs of disease pathogens.”

The researchers noted that the current paradigm for tick-borne disease control places nearly all the burden on the individual to prevent tick bites, while broader-scale tick management by professionals has been insufficient to stem increases in tick-borne pathogen transmission.

“Although the fire suppression era persists in many parts of the United States, prescribed burns have been used successfully in a growing number of fire-suppressed landscapes in recent decades,” Gallagher said. “We believe there’s an opportunity to reduce the number of ticks by using prescribed fire to restore the health of forest ecosystems, and we think this approach can be integrated as part of a multipronged strategy for managing ticks and tick-borne diseases.”