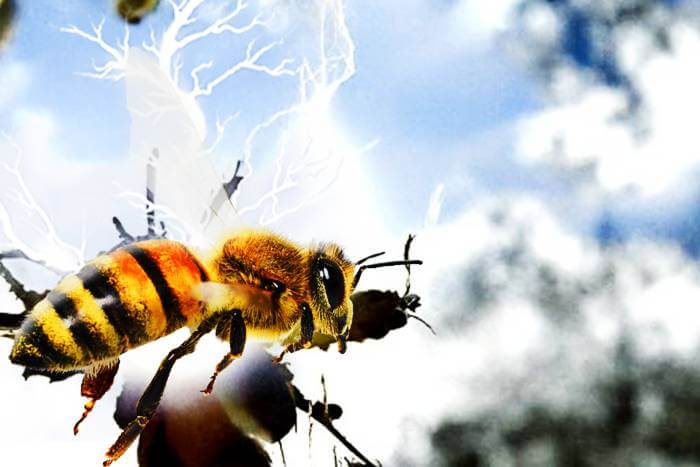 AI rendering of bees and electricity

By measuring the electrical fields near swarming honeybees, researchers have discovered that insects can produce as much atmospheric electric charge as a thunderstorm cloud. This type of electricity helps shape weather events, aids insects in finding food, and lifts spiders up in the air to migrate over large distances. The research, appearing on October 24 in the journal iScience, demonstrates that living things can have an impact on atmospheric electricity.

“We always looked at how physics influenced biology, but at some point, we realized that biology might also be influencing physics,” says first author Ellard Hunting, a biologist at the University of Bristol. “We’re interested in how different organisms use the static electric fields that are virtually everywhere in the environment.”

As with most living creatures, bees carry an innate electric charge. Having found that honeybee hive swarms change the atmospheric electricity by 100 to 1,000 volts per meter, increasing the electric field force normally experienced at ground level, the team developed a model that can predict the influence of other species of insects.

“We only recently discovered that biology and static electric fields are intimately linked and that there are many unsuspected links that can exist over different spatial scales, ranging from microbes in the soil and plant-pollinator interactions to insect swarms and perhaps the global electric circuit,” says Ellard.

“Interdisciplinarity is valuable here—electric charge can seem like it lives solely in physics, but it is important to know how aware the whole natural world is of electricity in the atmosphere,” says co-author Giles Harrison, an atmospheric physicist from the University of Reading.