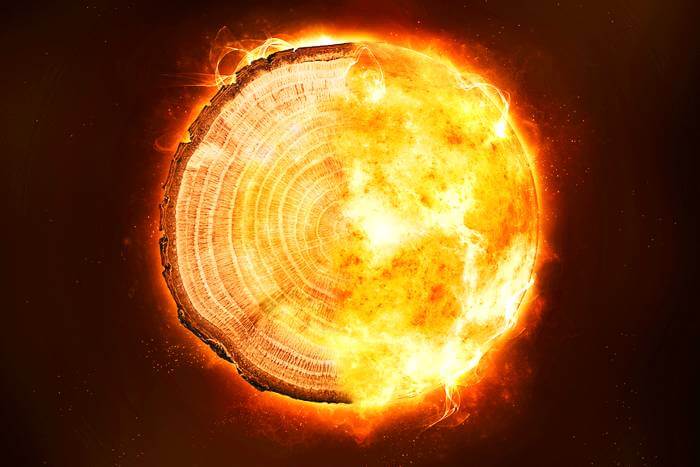 A University of Queensland study has shed new light on a mysterious, unpredictable and potentially devastating kind of astrophysical event.

A team led by Dr Benjamin Pope from UQ’s School of Mathematics and Physics applied cutting edge statistics to data from millennia-old trees, to find out more about radiation ‘storms’.

“These huge bursts of cosmic radiation, known as Miyake Events, have occurred approximately once every thousand years but what causes them is unclear,” Dr Pope said.

“The leading theory is that they are huge solar flares.

“We need to know more, because if one of these happened today, it would destroy technology including satellites, internet cables, long-distance power lines and transformers.

“The effect on global infrastructure would be unimaginable.”

“Because you can count a tree’s rings to identify its age, you can also observe historical cosmic events going back thousands of years,” Mr Zhang said.

“When radiation strikes the atmosphere it produces radioactive carbon-14, which filters through the air, oceans, plants, and animals, and produces an annual record of radiation in tree rings.

“We modelled the global carbon cycle to reconstruct the process over a 10,000-year period, to gain insight into the scale and nature of the Miyake Events.”

The common theory until now has been that Miyake Events are giant solar flares.

“But our results challenge this,” Mr Zhang said.

“We’ve shown they’re not correlated with sunspot activity, and some actually last one or two years.

“Rather than a single instantaneous explosion or flare, what we may be looking at is a kind of astrophysical ‘storm’ or outburst.”

Dr Pope said the fact scientists don’t know exactly what Miyake Events are, or how to predict their occurrence is very disturbing.

“Based on available data, there’s roughly a one per cent chance of seeing another one within the next decade.

“But we don’t know how to predict it or what harms it may cause.

“These odds are quite alarming, and lay the foundation for further research.”

The research is published in Proceedings of the Royal Society A.

The study was also completed with undergraduate maths and physics students Utkarsh Sharma and Jordan Dennis.

The work was supported by a philanthropic donation to UQ from the Big Questions Institute.