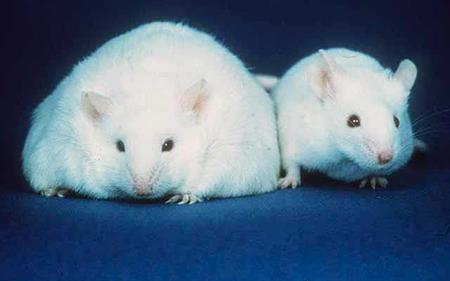 In mouse models, researchers found that how much animals ate and when altered their gut microbiome, sometimes for the worse. Photo credit: Public domain — original work of the U.S. Federal Government

A new study by Portland State University researchers is the first to show that eating a diet exclusively high in saturated fats can reprogram the mouse immune system, making it better able to fight off infection but more susceptible to systemic inflammatory conditions, including sepsis. Brooke Napier, assistant professor of biology at PSU, led the study, which was published in eLife.

The ketogenic or “keto” diet is a popular high-fat diet used for weight loss or to control epileptic seizures. This study shows that when mice eat a ketogenic diet that is high in saturated fats it can have a significant impact on their immune system.

A previous study by Napier and colleagues found that mice fed a high-fat, high-sugar Western diet were more susceptible to sepsis and had a higher mortality rate than mice fed a standard diet. In the current study, the researchers found similar effects in mice fed a high-fat ketogenic diet, suggesting that dietary fat may play a role in sepsis.

The researchers focused on one particular fat found in the blood of the mice fed a ketogenic diet: palmitic acid, which is commonly found in animal fats and dairy products. Remarkably, mice fed a normal diet who were injected with palmitic acid also became more susceptible to sepsis.

“It was just exposure to this one saturated fat that made them more susceptible to sepsis mortality,” says Napier. “The idea that you could have a specific fat in your diet that would cause such a drastic outcome in disease is kind of incredible.”

Napier and her team next probed just how exactly high levels of palmitic acid could initiate sepsis. Their first clue came when they noticed that mice fed the Western diet, mice fed the ketogenic diet, and mice treated with palmitic acid all had high levels of inflammatory cytokines, immunological hormones that can cause fever and systemic inflammation during sepsis.

The presence of the inflammatory cytokines suggested that palmitic acid could be affecting the immune system by causing inflammation, but Napier soon discovered that the story was more complicated—and more interesting—than that.

When you get sick or receive a vaccine, your adaptive immune system makes antibodies, preparing your body to fight off a future infection. This is a form of biological ‘memory’ that can last months, years, or even a lifetime.

In this study, Napier and colleagues learned that palmitic acid can trigger trained immunity. The fat acts as a “brief pulse of inflammation” that alters the function of stem cells in the mouse’s bone marrow so that they produce more inflammatory innate immune cells in the future. This means that when the innate immune system encounters a second inflammation stimulus later on, it responds much more strongly. Sometimes, as in the case of sepsis, this response is too strong.

“Our model is the first time anyone has ever shown that a dietary constituent can provide this first pulse of inflammation,” says Napier. “The fat is reprogramming their stem cells to produce more inflammatory innate immune cells, and those innate immune cells—when they’re put in this sepsis disease model—produce more cytokines, more fever and higher mortality rates.”

But that isn’t the whole story—because inflammation isn’t always a bad thing.

“If you just have an infection, more inflammation is better because you can clear the infection faster,” says Napier.

The researchers found this to be the case in the mice treated with palmitic acid. They were better able to fight off a Candida yeast infection than untreated mice.

Not all fats are created equal

Napier and colleagues also found that another type of fat may be able to counteract the harmful effects of palmitic acid. Oleic acid, a polyunsaturated fat found in many plant-based oils including olive oil, can block the synthesis of ceramide, a fatty substance that can initiate a stress response in cells and may play a role in the hyperinflammatory response that causes sepsis.

When the researchers fed mice a ketogenic diet for two weeks but also gave them oleic acid for the final three days, they no longer showed an increased susceptibility to sepsis.

“It was absolutely shocking,” says Napier.

While more research is needed to see how the results of this study may extend to humans, these results could suggest that the types of fats a person eats could impact the functioning of their immune system and their susceptibility to disease.

“If you are on a keto diet that is substantially heavy in dairy products and in red meats, you’re going to get a very high level of palmitic acid. Without counteracting that with polyunsaturated fats from something like olive oil, it would seem very reasonable that you could be making yourself more susceptible to sepsis,” Napier says, noting that this study is in no means a red mark against a ketogenic diet. “In the same way, if you eat a lot of palmitic acid you could also be helping yourself to clear infection in the time of a global pandemic.”

These results may also have relevance for hospitals. They could lead to changes in the diets given to people being fed with feeding tubes, for example, or inform how best to administer medications that are solubilized in fatty acids. Healthcare providers may one day increase or decrease the ratios of oleic acid and palmitic acid for a patient depending on their particular risk of infection or sepsis.

“We are definitely looking for ways to apply this new science to clinical issues,” says Napier.

The lab is also exploring the effects of palmitic acid in breast milk. “We are now trying to understand if the level of fat that the mother eats affects the weaning child’s innate immune response because clearly a response like that to fat must be evolutionarily conserved,” she says. “Our hypothesis is that palmitic acid in the breast milk is protecting neonates from infection during weaning.”