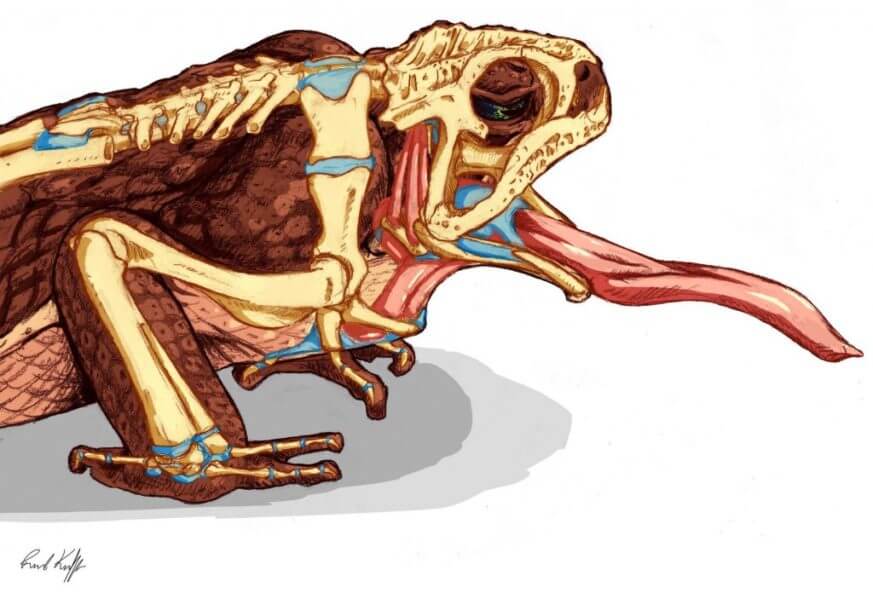 Cane toads extend their tongues up to 80% the length of their skulls when unrolling them to catch prey and retract them an impressive 87% of their skull length when slingshotting their tongue into their throats. IMAGE BY KEEFFE ET AL., 2022 IN INTEGRATIVE ORGANISMAL BIOLOGY

The phrase “to swallow one’s tongue” has been around since at least the 1880s and has been repurposed in several languages to mean everything from falling silent to a general feeling of fear. While it’s anatomically impossible for a human to swallow their tongue, a new study shows that cane toads (Rhinella marina) achieve this feat each time they eat.

The authors used X-ray videography to study the toads’ feeding behavior, providing the first glimpse of what frogs do with food once it’s safely in their mouths. According to their results, cane toads swallow prey using a complex pulley system of cartilage and muscle that travels so far down their throat, it butts up against their heart.

“We know a lot about how frogs extend their tongues and how it sticks to their prey, but prior to this study, essentially everything that happens after they close their mouths was a mystery,” said lead author Rachel Keeffe, who completed the research while working toward her doctoral degree with the University of Florida’s department of biology.

Naturalists as far back as 1827 were fascinated with amphibian eating habits. But frogs are lightning-fast at capturing and consuming prey — so fast that it’s nearly impossible for the human eye to track their movements. It wasn’t until the development of high-speed video in the mid-20th century that scientists were able to directly observe the way frog tongues unroll like a party horn and wrap their hapless targets in an adhesive hug.

Even then, scientists could only guess at how they swallowed their food. Some theorized that frogs used their tongues to directly deposit food in their throats, while others suggested they pushed food along by squeezing their eyes shut. But none of these initial ideas could account for the strange structures researchers found inside frog mouths during dissections.

Many frog species have two sets of fanglike teeth on the roof of their mouths, and toothless toads have ridges along their upper palate resembling a wash board. Amphibians also have a cartilaginous plate called a hyoid, which has loops and prongs attached to muscles and that Keeffe compares to a marionette. The hyoid plate rests on the floor of their mouths, and its function pertaining to frogs’ ability to swallow prey was entirely unknown.

To find out how frogs manipulated their food, Keeffe and her colleagues attached metallic beads at key points in the mouths of cane toads. Growing up to six inches in length, cane toads are one of the largest frog species, which made them the perfect specimen to observe the rapid and minute movements they make when eating.

After placing the toads in a clear observation box, Keeffe fed them a steady stream of crickets while filming them with X-ray videography. A first-pass examination of the resulting videos revealed a mechanism unlike anything they’d expected.

“We weren’t sure what was happening at first,” Keeffe said. “The whole floor of the mouth was pulled backward into the throat and the tongue along with it.”

Keeffe spent months meticulously reconstructing the movements into 3D animations to determine exactly how the apparatus functioned. She then illustrated a precise play-by-play from the still frames, beginning at the moment each cricket is selected and reeled into mouth.

Once the tongue has reached its fullest extent, the hyoid retracts into the throat. The tongue, which is directly attached to the hyoid, is then slingshotted back into the mouth. It’s unclear how far back the hyoid can move because its path is blocked by the frog’s heart, which it slides up against milliseconds before the tongue and attached prey smash into the cartilaginous cushion, Keeffe explained.

Although the toad has successfully snagged its prey at this point, it still faces the problem of having to dislodge the concussed insect from its sticky tongue. It does this in the final feeding step, which the authors dubbed the hyoid dorsal ascent.

“The hyoid shoots up and presses the tongue against the roof of the mouth, after which it moves forward, essentially scraping the food off into the esophagus.”

The final ascent and scraping motion may explain the presence of ridges and fangs on the upper palate of some frogs, Keeffe said. “If this is what all frogs are doing, then these structures are definitely playing a role in swallowing.”

The entire process, from start to finish, takes less than two seconds, and most of that time is spent repositioning the tongue and hyoid after swallowing.

There’s an incredible diversity of feeding mechanisms among the 7,000 known frog species, ranging from the projectile tongues of toads to the suction feeding in aquatic pipid frogs. Keeffe says the next obvious step would be a comparative study among various species to see whether the feeding behavior of cane toads is the rule rather than the exception.

The authors published their study in the journal Integrative Organismal Biology.

Richard Blob of Clemson University, David Blackburn of the Florida Museum of Natural History and Christopher Mayerl of Northern Arizona University were co-authors on the study.

Funding for the study was provided in part by the National Science Foundation (grants DGE-1315138, DGE-1842473), the Brian Riewald Memorial Fund and the Zirpolo Fund of Northeast Ohio Medical University.