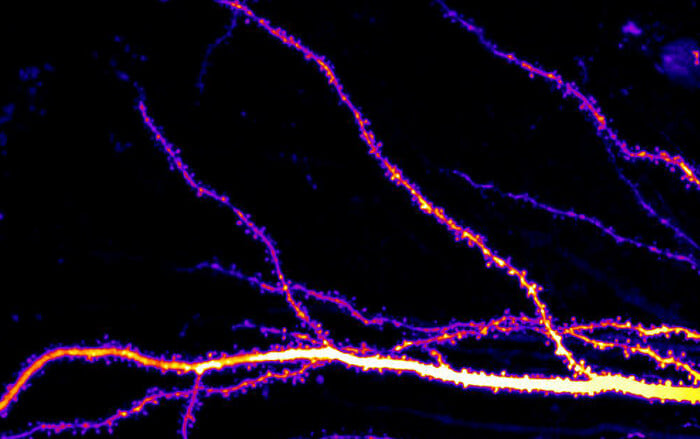 In a recent search for gene variants associated with Alzheimer’s disease (AD), several affected families showed a mutation in an enzyme called protein kinase C-alpha (PKCα). Family members with this mutation had AD; those without the mutation did not.

The M489V mutation has since been shown to increase the activity of PKCα by a modest 30 percent, so if and how it contributes to the neuropathology of AD has remained unclear.

In a new study, researchers at University of California San Diego School of Medicine found that the subtle increase in PKCα was sufficient to produce biochemical, cellular and cognitive impairments in mice, similar to those observed in human AD. The findings, published online on November 23, 2022 in Nature Communications, position PKCα as a promising therapeutic target for the disease.

PKCα regulates the function of many other proteins, particularly in the brain. The enzyme facilitates chemical reactions that add phosphate groups to other proteins, shaping their activity and ability to bind to other molecules. By tuning the phosphorylation state of proteins in the synaptic environment, PKCα may play an important role in synaptic function and neuronal signaling.

To assess its role in AD, several research teams collaborated to first generate a mouse model with the PKCα M489V mutation and then assess its biochemistry and behavior over the next year and a half (corresponding to approximately 55 years in human aging).

After three months, the brains of the mutated mice had significantly altered levels of protein phosphorylation compared to the brains of wild type control mice, indicating that neuronal proteins were being misregulated. By 4.5 months, the mice’s hippocampal neurons showed several cellular changes, including synaptic depression and reduced density of dendritic spines. By 12 months, the mice showed impaired performance in behavioral tests of spatial learning and memory, clear evidence of cognitive decline.

“We were surprised to find that just a slight increase in PKCα activity was enough to recreate the Alzheimer’s phenotype in a mouse,” said senior author Alexandra C. Newton, PhD, Distinguished Professor of Pharmacology at UC San Diego School of Medicine. “This is an amazing example of the importance of homeostasis in biology — even minor tweaks in kinase activity can result in pathology if the effects are allowed to accumulate over a lifetime.”

To confirm whether similar enzymatic changes could be observed in human patients, the researchers also measured protein levels in the frontal cortex of human brains from deceased patients with AD and control individuals. Brains from AD patients showed a 20 percent increase in PKCα. Furthermore, phosphorylation of a known PKCα substrate was increased by approximately four-fold in these brains, further suggesting that PKCα activity was enhanced in the human AD brain.

“The PKCα M489V mutation has been a great way to test the role of this enzyme in AD, but there are many other ways to have aberrant PKCα,” said Newton. “We’re finding that many mutations associated with AD are in genes that regulate PKCα, so a variety of gene variants may actually be converging onto this same important pathway.”

The authors note that several pharmacological inhibitors of PKCα have already been developed for use in cancer and could be repurposed to treat AD. Future drug development might focus on ways to selectively inhibit PKCα at the synapse.

“It’s increasingly clear that the amyloid plaques we see in AD are secondary to some other earlier process happening in the brain,” said Newton. “Our findings add to a growing body of evidence that PKCα may be an important part of that process, and is a promising target for treating or preventing Alzheimer’s disease.”