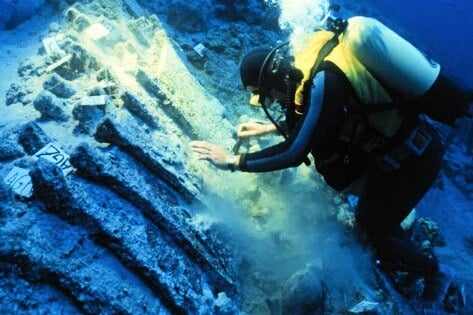 More than 2,000 years before the Titanic sunk in the North Atlantic Ocean, another famous ship wrecked in the Mediterranean Sea off the eastern shores of Uluburun — in present-day Turkey —  carrying tons of rare metal.

Since its discovery in 1982, scientists have been studying the contents of the Uluburun shipwreck to gain a better understanding of the people and political organizations that dominated the time period known as the Late Now, a team of scientists, including Michael Frachetti, professor of archaeology in Arts & Sciences at Washington University in St. Louis, have uncovered a surprising finding: small communities of highland pastoralists living in present-day Uzbekistan in Central Asia produced and supplied roughly one-third of the tin found aboard the ship — tin that was en route to markets around the Mediterranean to be made into coveted bronze metal.

The research, published on November 30 in Science Advances, was made possible by advances in geochemical analyses that enabled researchers to determine with high-level certainty that some of the tin originated from a prehistoric mine in Uzbekistan, more than 2,000 miles from Haifa, where the ill-fated ship loaded its cargo.

But how could that be? During this period, the mining regions of Central Asia were occupied by small communities of highlander pastoralists — far from a major industrial center or empire. And the terrain between the two locations — which passes through Iran and Mesopotamia — was rugged, which would have made it extremely difficult to pass tons of heavy metal.

Frachetti and other archaeologists and historians were enlisted to help put the puzzle pieces together. Their findings unveiled a shockingly complex supply chain that involved multiple steps to get the tin from the small mining community to the Mediterranean marketplace.

“It appears these local miners had access to vast international networks and — through overland trade and other forms of connectivity — were able to pass this all-important commodity all the way to the Mediterranean,” Frachetti said.

“It’s quite amazing to learn that a culturally diverse, multiregional and multivector system of trade underpinned Eurasian tin exchange during the Late Bronze Age.”

“To put it into perspective, this would be the trade equivalent of the entire United States sourcing its energy needs from small backyard oil rigs in central Kansas.”

Adding to the mystique is the fact that the mining industry appears to have been run by small-scale local communities or free laborers who negotiated this marketplace outside of the control of kings, emperors or other political organizations, Frachetti said.

“To put it into perspective, this would be the trade equivalent of the entire United States sourcing its energy needs from small backyard oil rigs in central Kansas,” he said.

The idea of using tin isotopes to determine where metal in archaeological artifacts originates dates to the mid-1990s, according to Wayne Powell, professor of earth and environmental sciences at Brooklyn College and a lead author on the study. However, the technologies and methods for analysis were not precise enough to provide clear answers. Only in the last few years have scientists begun using tin isotopes to directly correlate mining sites to assemblages of metal artifacts, he said.

“Over the past couple of decades, scientists have collected information about the isotopic composition of tin ore deposits around the world, their ranges and overlaps, and the natural mechanisms by which isotopic compositions were imparted to cassiterite when it formed,” Powell said. “We remain in the early stages of such study. I expect that in future years, this ore deposit database will become quite robust, like that of Pb isotopes today, and the method will be used routinely.”

Aslihan K. Yener, a research affiliate at the Institute for the Study of the Ancient World at New York University and a professor emerita of archaeology at the University of Chicago, was one of the early researchers who conducted lead isotope analyses. In the 1990s, Yener was part of a research team that conducted the first lead isotope analysis of the Uluburun tin. That analysis suggested that the Uluburun tin may have come from two sources — the Kestel Mine in Turkey’s Taurus Mountains and some unspecified location in central Asia.

“But this was shrugged off since the analysis was measuring trace lead and not targeting the origin of the tin,” said Yener, who is a co-author of the present study.

Yener also was the first to discover tin in Turkey in the 1980s. At the time, she said the entire scholarly community was surprised that it existed there, right under their noses, where the earliest tin bronzes occurred.

Some 30 years later, researchers finally have a more definitive answer thanks to the advanced tin isotope analysis techniques: One-third of the tin aboard the Uluburun shipwreck was sourced from the Mušiston mine in Uzbekistan. The remaining two-thirds of the tin derived from the Kestel mine in ancient Anatolia, which is in present-day Turkey.

Findings offer glimpse into life 2,000-plus years ago

By 1500 B.C., bronze was the “high technology” of Eurasia, used for everything from weaponry to luxury items, tools and utensils. Bronze is primarily made from copper and tin. While copper is fairly common and can be found throughout Eurasia, tin is much rarer and only found in specific kinds of geological deposits, Frachetti said.

“Finding tin was a big problem for prehistoric states. And thus, the big question was how these major Bronze Age empires were fueling their vast demand for bronze given the lengths and pains to acquire tin as such a rare commodity. Researchers have tried to explain this for decades,” Frachetti said.

The Uluburun ship yielded the world’s largest Bronze Age collection of raw metals ever found — enough copper and tin to produce 11 metric tons of bronze of the highest quality. Had it not been lost to sea, that metal would have been enough to outfit a force of almost 5,000 Bronze Age soldiers with swords, “not to mention a lot of wine jugs,” Frachetti said.

Unlike the mines in Uzbekistan, which were set within a network of small-scale villages and mobile pastoralists, the mines in ancient Anatolia during the Late Bronze Age were under the control of the Hittites, an imperial global power of great threat to Ramses the Great of Egypt, Yener explained.

The findings also show that life 2,000-plus years ago was not that different from what it is today.

“With the disruptions due to COVID-19 and the war in Ukraine, we have become aware of how we are reliant on complex supply chains to maintain our economy, military and standard of living,” Powell said. “This is true in prehistory as well. Kingdoms rose and fell, climatic conditions shifted and new peoples migrated across Eurasia, potentially disrupting or redistributing access to tin, which was essential for both weapons and agricultural tools.

“Using tin isotopes, we can look across each of these archaeologically evident disruptions in society and see connections were severed, maintained or redefined. We already have DNA analysis to show relational connections. Pottery, funerary practices, etc., illustrate the transmission and connectivity of ideas. Now with tin isotopes, we can document the connectivity of long-distance trade networks and their sustainability.”

The current research findings settle decades-old debates about the origins of the metal on the Uluburun shipwreck and Eurasian tin exchange during the Late Bronze Age. But there are still more clues to explore.

After they were mined, the metals were processed for shipping and ultimately melted into standardized shapes — known as ingots — for transporting. The distinct shapes of the ingots served as calling cards for traders to know from where they originated, Frachetti said.

Many of the ingots aboard the Uluburun ship were in the “oxhide” shape, which was previously believed to have originated in Cyprus. However, the current findings suggest the oxhide shape could have originated farther east. Frachetti said he and other researchers plan to continue studying the unique shapes of the ingots and how they were used in trade.