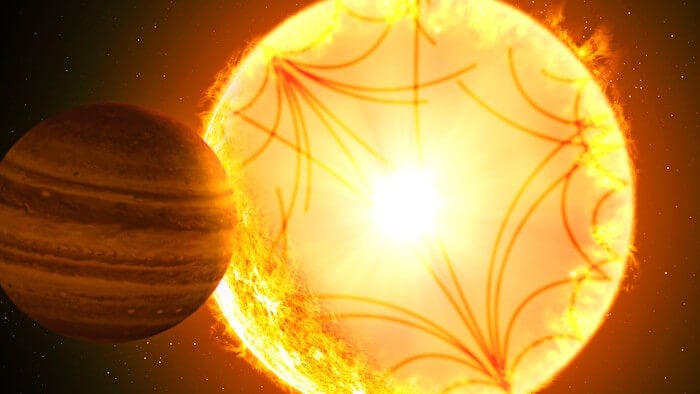 Astronomers have discovered an exoplanet (a planet outside our solar system) whose orbit is moving closer and closer to its host star, an older star, until it crashes into it and is destroyed.

This is the first time such a system has been observed and it provides new information about the long process of planetary orbital decay.

“We’ve previously detected evidence for exoplanets inspiraling toward their stars, but we have never before seen such a planet around an evolved star,” says Shreyas Vissapragada, a 51 Pegasi b Fellow at the Center for Astrophysics | Harvard & Smithsonian and lead author of a new study describing the results.

“Theory predicts that evolved stars are very effective at sapping energy from their planets’ orbits, and now we can test those theories with observations.”

The exoplanet, called Kepler-1658b, is known as a “hot Jupiter” because it is similar in size and mass to Jupiter but much closer to its host star. The process of orbital decay is difficult to study because it happens very slowly. In the case of Kepler-1658b, its orbit is decreasing by about 131 thousandths of a second per year. This decline was detected over 13 years of observations using three different instruments.

The cause of the orbital decay is tides, the same phenomenon that causes the rise and fall of the oceans on Earth. Tides are caused by the gravitational interaction between two orbiting bodies, and the energy released by these interactions can cause the bodies to move closer together or farther apart. In the case of Kepler-1658b, the tides are causing the exoplanet to move closer to its star.

The host star has entered a phase of its life called a subgiant phase, during which it has started to expand. The internal structure of evolved stars like this one is thought to play a role in their ability to affect the orbits of their planets, and studying Kepler-1658b may help astronomers better understand this process.