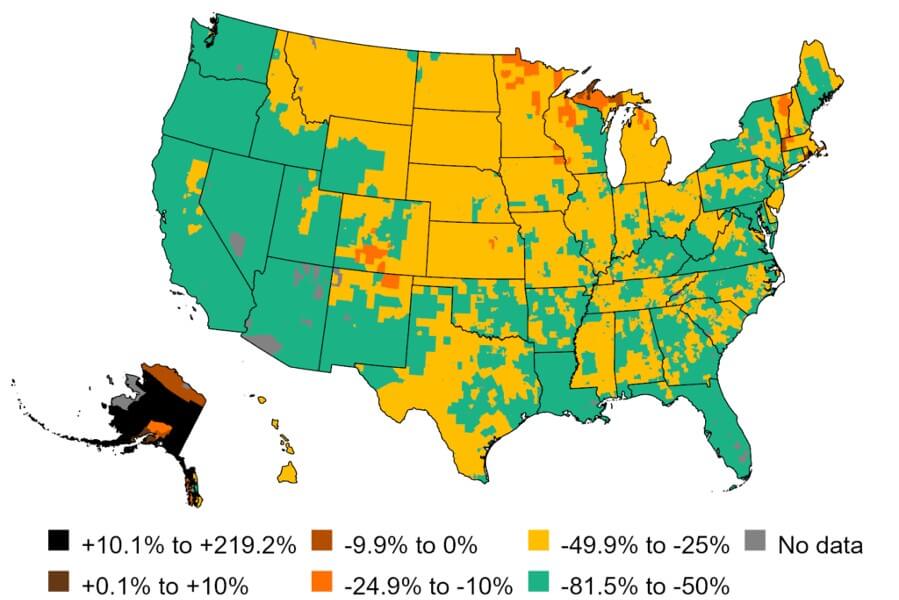 Map of percentage change in transportation energy burden from current on-road vehicle stock to a new battery-electric vehicle. Negative percentages indicate energy cost savings for EVs compared to gasoline powered vehicles. Areas with the greatest savings, shown in green, include the West Coast states and parts of the East and South. Transportation energy burden is the percentage of household income spent on fueling with gasoline or charging with electricity. Adapted from Vega-Perkins et al. in Environmental Research Letters, January 2023.

More than 90% of vehicle-owning households in the United States would see a reduction in the percentage of income spent on transportation energy—the gasoline or electricity that powers their cars, SUVs and pickups—if they switched to electric vehicles.

And more than 90% of households that replace gas-powered vehicles with EVs would also reduce the amount of climate-warming greenhouse gases they generate, according to a new University of Michigan study.

However, more than half of the lowest-income U.S. households (an estimated 8.3 million households) would continue to experience high transportation energy burdens, defined in this study as spending more than 4% of household income on filling the tank or charging up.

“Our results confirm the potential for widespread benefits from EV adoption,” said study corresponding author Joshua Newell, an urban geographer at the U-M Center for Sustainable Systems, part of the School for Environment and Sustainability.

“However, EV ownership in the U.S. has thus far been dominated by households with higher incomes and education levels, leaving the most vulnerable populations behind. Policy interventions are needed to increase EV accessibility so that all Americans can benefit from the EV transition.”

The new study was published online Jan. 11 in Environmental Research Letters, an IOP Publishing journal. It is the first study to consider the spatial variation of both EV energy costs and greenhouse gas emissions across the country.

EVs currently account for about 1% of the cars, SUVs and pickups on American roads. If all those vehicles were replaced with new EVs, the transportation energy burdens and associated greenhouse gas emissions would vary widely from place to place, according to the new study.

Reductions in both transportation energy burden and GHG emissions would be especially pronounced on the West Coast and in parts of the Northeast, due largely to cleaner energy grids and lower electricity prices.

Households in some locations could reduce their annual transportation-energy costs by $600 or more, and cut their annual carbon footprint by more than 4.1 metric tons of carbon dioxide equivalents, by buying a new EV.

But lower-income households in other parts of the country wouldn’t fare as well, Newell said.

Very high EV transportation energy burdens, ranging from 10% to 64%, would persist for the lowest-income households and would be concentrated in the Midwest and in the two states with the highest electricity prices: Hawaii and Alaska.

Eight percent of U.S. households (an estimated 9.6 million households) would see low savings in both transportation energy burden and greenhouse gas emissions by choosing an EV. “Both low” households are scattered across the country, with about half of them in Midwest states, including Michigan.

Factors that contribute to those low EV savings include cold winter temperatures that impact battery performance, electrical grids that rely largely on fossil fuels, or electricity prices that are higher relative to gasoline prices.

“We identified disparities that will require targeted policies to promote energy justice in lower-income communities—including the subsidizing of charging infrastructure—as well as strategies to reduce electricity costs and increase the availability of low-carbon transportation modes such as public transit, bicycling and car sharing,” said study lead author Jesse Vega-Perkins, who did the work for a master’s thesis at the U-M School for Environment and Sustainability.

The study used a geospatial model to evaluate three factors associated with the EV transition: transportation energy burden, fuel costs (meaning the cost of gasoline or the electricity needed to charge an EV) and greenhouse gas emissions.

The analysis does not include vehicle purchase cost. Total cost of ownership of EVs is the focus of a current study by the Center for Sustainable Systems.

Transportation accounts for the largest portion of the greenhouse gases emitted in the United States, with direct emissions from passenger vehicles and light-duty trucks comprising roughly 16% of U.S. emissions. Electrification is seen as the primary pathway to reducing those emissions.

The study was supported by funding from the U-M School for Environment and Sustainability.