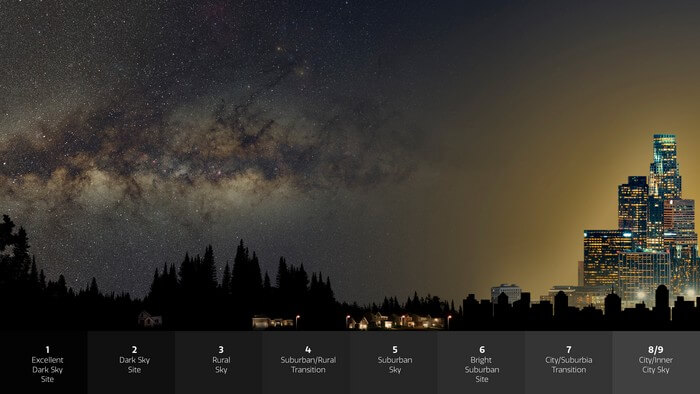 A startling analysis from Globe at Night — a citizen science program run by NSF’s NOIRLab — concludes that stars are disappearing from human sight at an astonishing rate. The study finds that, to human eyes, artificial lighting has dulled the night sky more rapidly than indicated by satellite measurements. The study showcases the unique contributions that citizen scientists can make in essential fields of research. This graphic illustrates how the greater the amount of light pollution, and therefore skyglow, the fewer the stars that are visible.

A startling analysis from Globe at Night — a citizen science program run by NSF’s NOIRLab — concludes that stars are disappearing from human sight at an astonishing rate. The study finds that, to human eyes, artificial lighting has dulled the night sky more rapidly than indicated by satellite measurements. The study published in the journal Science showcases the unique contributions that citizen scientists can make in essential fields of research.

From the glowing arc of the Milky Way to dozens of intricate constellations, the unaided human eye should be able to perceive several thousand stars on a clear, dark night. Unfortunately, growing light pollution has robbed about 30% of people around the globe and approximately 80% of people in the United States of the nightly view of their home galaxy. A new paper published in the journal Science concludes that the problem is getting rapidly worse.

New citizen-science-based research sheds alarming light on the problem of ‘skyglow’ — the diffuse illumination of the night sky that is a form of light pollution. The data for this study came from crowd-sourced observations collected from around the world as part of Globe at Night, a program run by NSF’s NOIRLab and developed by NRAO astronomer Connie Walker. The research reveals that skyglow is increasing more rapidly than shown in satellite measurements of Earth’s surface brightness at night.

“At this rate of change, a child born in a location where 250 stars were visible would be able to see only abound100 by the time they turned 18,” said Christopher Kyba, a researcher at the German Research Centre for Geosciences and lead author of the paper detailing these results.

Light pollution is a familiar problem that has many detrimental effects, not only on the practice of astronomy. It also has an impact on human health and wildlife, since it disrupts the cyclical transition from sunlight to starlight that biological systems have evolved alongside. Furthermore, the loss of visible stars is a poignant loss of human cultural heritage. Until relatively recently, humans throughout history had an impressive view of the starry night sky, and the effect of this nightly spectacle is evident in ancient cultures, from the myths it inspired to the structures that were built in alignment with celestial bodies.

Despite being a well-recognized issue, however, the changes in sky brightness over time are not well documented, particularly on a global scale.

Globe at Night has been gathering data on stellar visibility every year since 2006 [1]. Anyone can submit observations through the Globe at Night web application on a desktop or smartphone. After entering the relevant date, time and location, participants are shown a number of star maps. They then record which one best matches what they can see in the sky without any telescopes or other instruments.

This gives an estimate of what is called the naked eye limiting magnitude, which is a measure of how bright an object must be in order to be seen. This can be used to estimate the brightness of skyglow, because as the sky brightens, the fainter objects disappear from sight.

The authors of the paper analyzed more than 50,000 observations submitted to Globe at Night between 2011 and 2022, ensuring consistency by omitting entries that were affected by factors including cloud cover and moonlight. They focused on data from Europe and North America, since these regions had a sufficient distribution of observations across the land area as well as throughout the decade studied. The paper notes that the sky is likely brightening more quickly in developing countries, where satellite observations indicate the prevalence of artificial lighting is growing at a higher rate.

After devising a new method to convert these observations into estimates of the change in skyglow, the authors found that the loss of visible stars reported by Globe at Night indicates an increase in sky brightness of 9.6% per year over the past decade. This is much greater than the roughly 2% per year global increase in surface brightness measured by satellites.

“This shows that existing satellites aren’t sufficient to study how Earth’s night is changing,” said Kyba. “We’ve developed a way to ‘translate’ Globe at Night observations of star visibility made at different locations from year to year into continent-wide trends of sky brightness change. That shows that Globe at Night isn’t just an interesting outreach activity, it’s an essential measurement of one of Earth’s environmental variables.”

Existing satellites are not well suited to measuring skyglow as it appears to humans, because there are no current instruments monitoring the whole Earth that can detect wavelengths shorter than 500 nanometers, which corresponds to the color cyan, or greenish blue. Shorter wavelengths, however, contribute disproportionately to skyglow, because they scatter more effectively in the atmosphere. White LEDs, now increasingly commonly used in high-efficiency outdoor lighting, have a peak in emission between 400 and 500 nanometers.

“Since human eyes are more sensitive to these shorter wavelengths at nighttime, LED lights have a strong effect on our perception of sky brightness,” said Kyba. “This could be one of the reasons behind the discrepancy between satellite measurements and the sky conditions reported by Globe at Night participants.”

Beyond wavelength differences, space-based instruments do not measure light emitted horizontally very well, such as from illuminated signs or windows, but these sources are significant contributors to skyglow as seen from the ground. Crowd-sourced observations will therefore always be invaluable for investigating the direct human effects of sky brightness.

“The increase in skyglow over the past decade underscores the importance of redoubling our efforts and developing new strategies to protect dark skies,” said Walker. “The Globe at Night dataset is indispensable in our ongoing evaluation of changes in skyglow, and we encourage everyone who can to get involved to help protect the starry night sky.”

[1] From 2006 to 2010, Globe at Night data were collected based on a paper rather than an online form, so they were incompatible and were not included in this analysis.

This research was presented in a paper accepted for the journal Science (DOI: 10.1126/science.abq7781).

NSF’s NOIRLab (National Optical-Infrared Astronomy Research Laboratory), the US center for ground-based optical-infrared astronomy, operates the international Gemini Observatory (a facility of NSF, NRC–Canada, ANID–Chile, MCTIC–Brazil, MINCyT–Argentina, and KASI–Republic of Korea), Kitt Peak National Observatory (KPNO), Cerro Tololo Inter-American Observatory (CTIO), the Community Science and Data Center (CSDC), and Vera C. Rubin Observatory (operated in cooperation with the Department of Energy’s SLAC National Accelerator Laboratory). It is managed by the Association of Universities for Research in Astronomy (AURA) under a cooperative agreement with NSF and is headquartered in Tucson, Arizona. The astronomical community is honored to have the opportunity to conduct astronomical research on Iolkam Du’ag (Kitt Peak) in Arizona, on Maunakea in Hawai‘i, and on Cerro Tololo and Cerro Pachón in Chile. We recognize and acknowledge the very significant cultural role and reverence that these sites have to the Tohono O’odham Nation, to the Native Hawaiian community, and to the local communities in Chile, respectively.