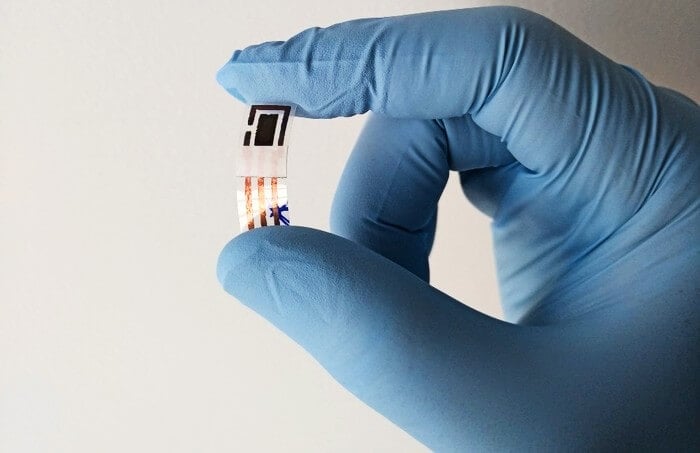 Heavy metals such as lead and cadmium are present in batteries, cosmetics, food and other things that are part of everyday life.

They are toxic when they accumulate in the human organism, potentially causing several health problems, but detecting them in body fluids requires expensive equipment and a controlled laboratory environment. Researchers at the University of São Paulo (USP) in Brazil have now developed a portable sensor made of simple materials to detect heavy metals in sweat, which is easily sampled.

The research was supported by FAPESP (projects 16/01919-6 and 16/06612-6) and involved groups at the São Carlos Institutes of Physics (IFSC) and Chemistry (IQSC), as well as collaborators at the University of Munich in Germany and Chalmers University of Technology in Sweden.

The results are published in an article in the journal Chemosensors. “We get important information on a person’s health by measuring their exposure to heavy metals. High levels of cadmium can lead to fatal problems in the airways, liver and kidneys. Lead poisoning damages the central nervous system and causes irritability, cognitive impairment, fatigue, infertility, high blood pressure in adults and delayed growth and development in children,” said Paulo Augusto Raymundo Pereira, last author of the article and a researcher at IFSC-USP.

Humans eliminate heavy metals mainly in sweat and urine, and analysis of these biofluids is a key part of toxicological tests as well as treatment. “The world needs flexible sensors that are easily, cheaply and rapidly mass-produced, as our device is, for on-site detection, continuous monitoring and decentralized analysis of hazardous compounds,” he said.

Unlike other gold-standard tests to detect heavy metals in biofluids, the sensor is simple in terms of the materials used to make it and the stages of its production. “The base of the device is polyethylene terephthalate [PET], on top of which is a conductive flexible copper adhesive tape, a label of the kind you can buy from a stationer’s, with the sensor printed on it, and a protective layer of nail varnish or spray. The exposed copper is removed by immersion in ferric chloride solution for 20 minutes, followed by washing in distilled water to promote the necessary corrosion. All this ensures speed, scalability, low power and low cost,” said Robson R. da Silva, a researcher at Chalmers University of Technology in Sweden and a co-author of the article.

The device is connected to a potentiostat, a portable instrument that determines the concentration of each metal by measuring differences in potential and current between electrodes. The result is displayed on a computer or smartphone using appropriate application software.

The system is simple enough to be used by non-specialists without training, as well as technicians in such locations as hospitals, clinics and doctor’s offices. The device can also be used in several types of environmental management situation. “Artesian wells, for example, are regulated and require constant monitoring to analyze water quality. Our sensor can be extremely useful in such cases,” said Anderson M. de Campos, first author of the article and a researcher at the University of Munich in Germany.

The sensor’s performance in detecting lead and cadmium was assessed in trials using artificial sweat enriched under ideal experimental conditions. Adaptations are required before the device can be patented. “Until the invention was finalized, we found no reports of flexible copper sensors being used to detect toxic metals in sweat, but an anteriority search would probably turn up something similar, potentially blocking a patent application,” said Marcelo L. Calegaro, the other co-author of the article and a researcher at IQSC-USP.

To avoid this problem, he is working on refinements and additional applications. One idea would entail replacing the corrosion stage, which produces waste, by cutting in a paper machine. Another would be to use the same type of device to detect pesticides in water and food.

The São Paulo Research Foundation (FAPESP) is a public institution with the mission of supporting scientific research in all fields of knowledge by awarding scholarships, fellowships and grants to investigators linked with higher education and research institutions in the State of São Paulo, Brazil. FAPESP is aware that the very best research can only be done by working with the best researchers internationally. Therefore, it has established partnerships with funding agencies, higher education, private companies, and research organizations in other countries known for the quality of their research and has been encouraging scientists funded by its grants to further develop their international collaboration. You can learn more about FAPESP at www.fapesp.br/en and visit FAPESP news agency at www.agencia.fapesp.br/en to keep updated with the latest scientific breakthroughs FAPESP helps achieve through its many programs, awards and research centers. You may also subscribe to FAPESP news agency at http://agencia.fapesp.br/subscribe