More than half of all couches tested in a Duke University-led study contained potentially toxic or untested chemical flame retardants that may pose risks to human health.

Among the chemicals detected was “Tris,” a chlorinated flame retardant that is considered a probable human carcinogen based on animal studies. “Tris was phased out from use in baby pajamas back in 1977 because of its health risks, but it still showed up in 41 percent of the couch foam samples we tested,” said Heather Stapleton, associate professor of environmental chemistry at Duke’s Nicholas School of the Environment. 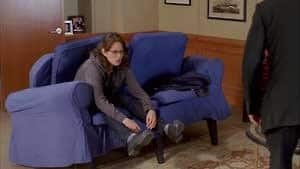 More manufacturers in recent years are treating their couches’ foam padding with chemical flame retardants to adhere to California Technical Bulletin 117 (TB 117), she said. TB 177 requires all residential furniture sold in California to withstand a 12-second exposure to a small open flame without igniting, to help reduce deaths and injuries from accidental home fires. Over the years, the statewide standard essentially has become a de facto national standard, due to the economic importance of the California market.

In many cases, the manufacturer may not know what chemicals have been used. Most manufacturers buy their foam padding from a vendor who, in turn, buys the chemicals used to treat it from another vendor. The identity of the chemical flame retardants often gets lost along the way, or is protected under law as proprietary.

Stapleton and her colleagues analyzed 102 polyurethane foam samples from couches purchased for home use in the United States between 1985 and 2010. They published their findings in a peer-reviewed study released Wednesday in the journal Environmental Science & Technology.

In addition to finding Tris, the tests revealed that 17 percent of the foam samples contained the flame-retardant pentaBDE, which is banned in 172 countries and 12 U.S. states and was voluntarily phased out by U.S manufacturers in 2005.

PentaBDEs are long-lasting chemicals that over time migrate into the environment and accumulate in living organisms. Studies show they can disrupt endocrine activity and affect thyroid regulation and brain development. Early exposure to them has been linked to low birth weight, lowered IQ and impaired motor and behavioral development in children.

PentaBDE and Tris were the only flame retardants found in couches purchased before 2005. After 2005, Tris was the most common flame retardant found. In addition, Stapleton and her colleagues identified two new flame-retardant chemical mixtures in more recently purchases couches for which there is little or no health data available.

“Overall, we detected flame-retardant chemicals in 85 percent of the couches we tested and in 94 percent of those purchased after 2005,” Stapleton said. “More than half of all samples, regardless of the age of the couch, contained flame retardants that are potentially toxic or have undergone little or no independent testing for human health risks.”

Stapleton said that so many new proprietary chemical flame retardants have been introduced in recent years that it has become very difficult for scientists to identify them all or determine their presence consumer products.