Theoretical physicist Elad Eizner from Ben Gurion University, Israel, and colleagues created models to study the attractive forces affecting atoms located at a wide range of distances from a surface, in the hundreds of nanometers range.

Their results, about to be published in EPJ D, show that these forces depend on electron diffusion, regardless of whether the surface is conducting or not. Ultimately, these findings could contribute to designing minimally invasive surface probes. Bombarding a surface with atoms helps us understand the distribution of its electrons and the structural arrangement of the surface atoms. The authors focused on understanding how a long-range force— referred to as the van der Waals-Casimir-Polder (vdW-CP) force — present between an atom and a surface allow us to distinguish surface characteristics on the basis of their conductivity. 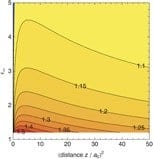 A key factor in understanding the behaviour of the force, they realised, is the size of the electron cloud surrounding an impurity charge in the system. The latter depends both on the electrons’ conductivity and their capability to diffuse in and along the surface.
They devised one model for the diffusion of the electronic charge in the bulk of the material and another one in the near-surface region. They tested their models on both conducting and non-conducting surfaces. They were thus able to explain why the atom-surface force shows a continuous transition in terms of conductivity between both types of surfaces.

For distances comparable to the size of the electron cloud spread, the strength of the vdW-CP attraction force, they found, can help distinguish between bulk and surface electrons diffusion. It could therefore be used as a probe. Potential applications exist, for example, in quantum computer hardware architectures focusing on the interface between different carriers of quantum bits of information.